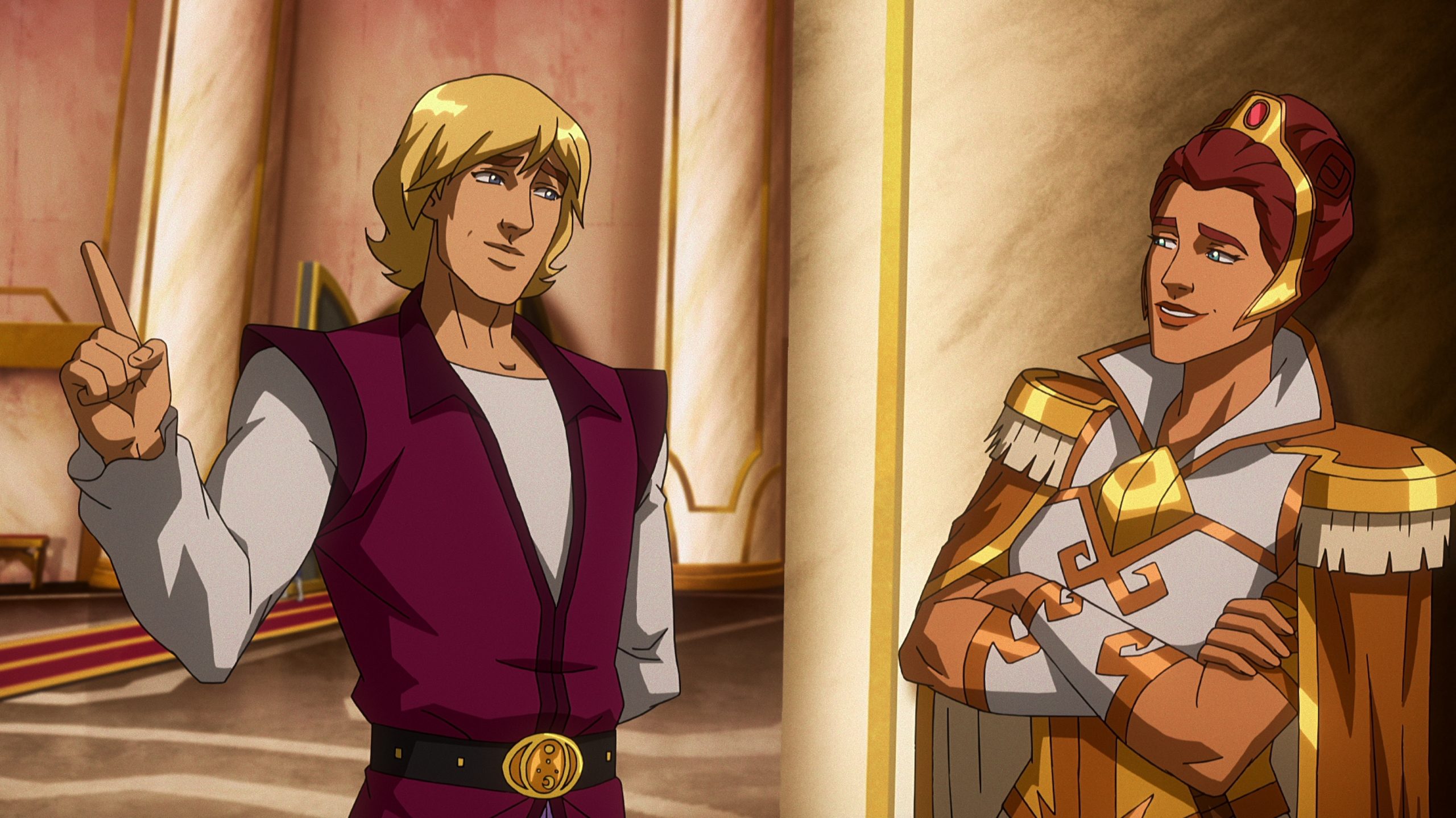 RELATED: Kevin Smith Continues To Deny Masters of The Universe: Revelation Was A ‘Bait And Switch’, Tells Upset Fans To “Grow The F— Up”

Smith made claim to this fact while making an appearance at the Masters of the Universe 40th Anniversary panel held during the recent San Diego Comic-Con. 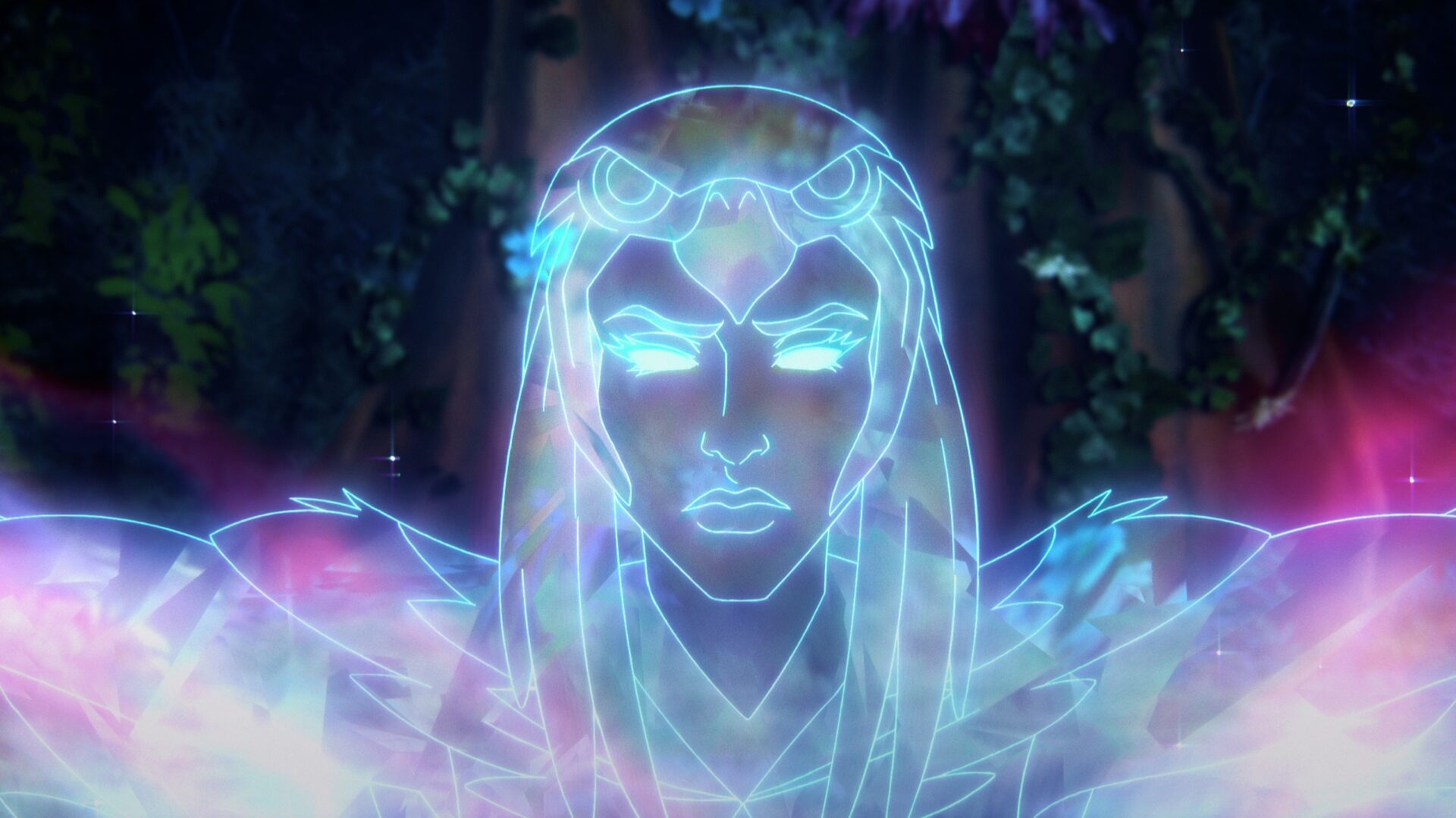 As per recaps of the panel provided by attending staff members of both Screenrant and ComicBook.com, following a brief Q&A wherein he defended his decision to shift the focus of the first season away from the franchise’s main character, Smith confirmed that He-Man would be seen in every episode of Revolutions.

The showrunner further teased that the series’ second-part would be “all about He-Man vs. Skeletor” and that its story would be “incredibly moving”. 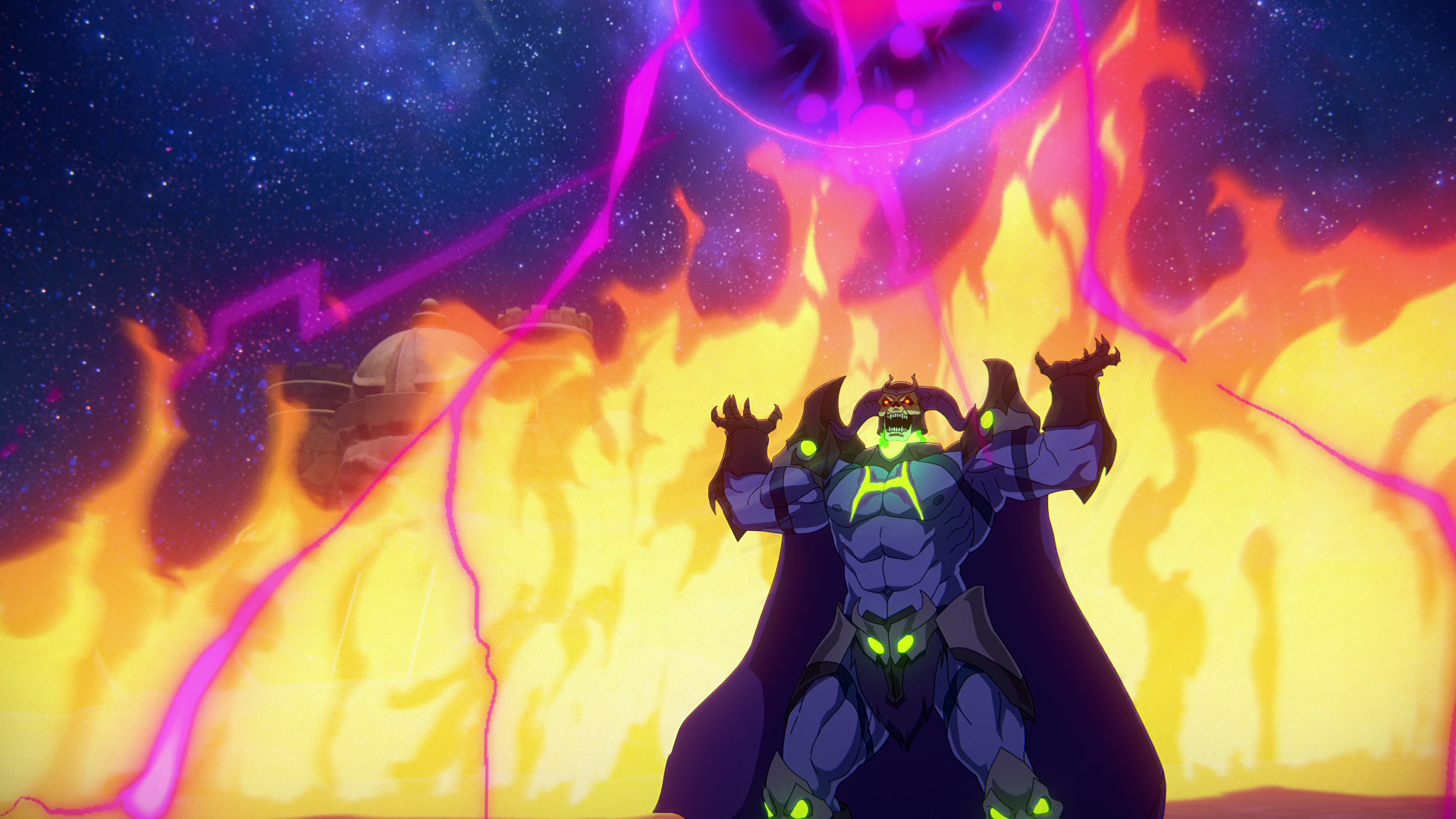 While this guarantee seems to imply an incoming course-correction for the series in order to bring it more in line with its original advertised identity as a direct sequel to the original 80s cartoon, given how he lied to fans regarding his intent to subvert Masters of the Universe and subsequently attacked the critics who rightly called him out, Smith’s words are unlikely to either inspire any confidence in his work or win back any of the fans he turned away from the franchise.

The saga of Smith’s He-Man bait-and-switch began at Power Con 2019, where after announcing that Revelations was in production, Smith unveiled the series’ official Netflix description, which revealed that series center on Teela and her quest “to solve the mystery of the missing Sword of Power in a race against time to prevent the end of the Universe!” 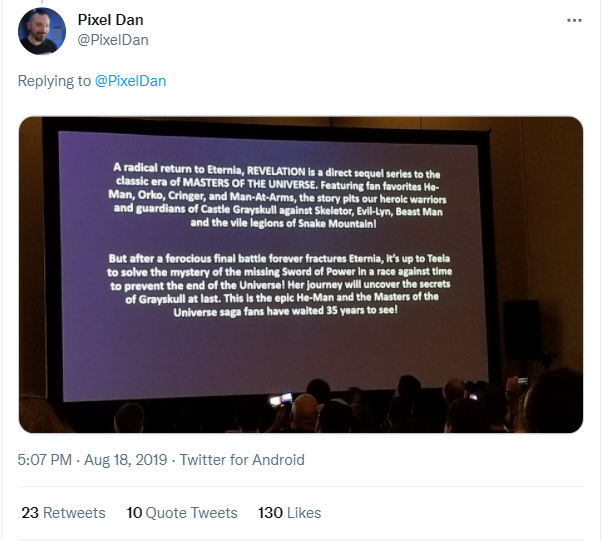 Following this official announcement, YouTubers Clownfish TV took to Twitter in March 2020 to report, “My understanding of Kevin Smith’s He-Man series from an alleged insider… Teela is a better He-Man than Adam, and he steps aside to let her (and her girlfriend) take over Hero duties.” 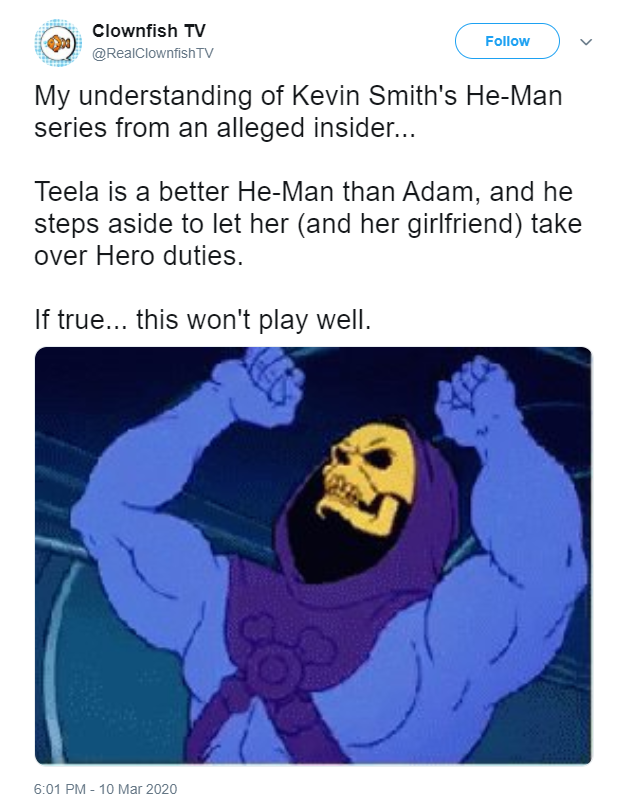 Smith then proceeded to tell one of the central lies of his He-Man controversy, retweeting Clownfish TV’s tweet and writing, “As showrunner, I really could’ve used these story suggestions *before* we locked the scripts.” However, no – He-Man does no stepping aside and Teela has no girlfriend in our show.”

“The storyline is pretty dark and way metal,” he added. “Before REVELATION we were calling it END OF THE UNIVERSE.” 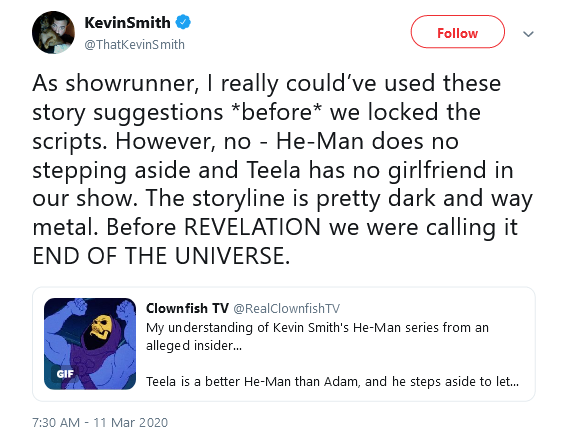 He concluded his dismissal of the YouTubers by informing them, “Also, Clownfish TV? Instead of posting your faux ‘insider’ info, here’s a *real* story: Mattel made a behind-the-scenes video featuring our actors recording. So a fan took some of Mark & Lena’s dialogue and spliced them into old Filmation clips.” 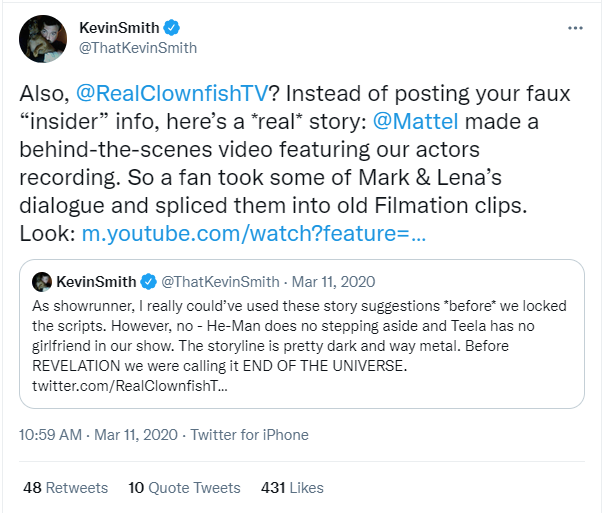 Despite Smith’s condescending denial, word of Teela’s promotion to series lead would resurface just two months later when Screenrant reported that “One major difference [between the original series and Revelations] is that though He-Man will certainly be around, he won’t be the main protagonist anymore. Instead, the focus will be on Teela.”

They added, “Even so, He-Man should still have a large presence, since the series never did get to explore the final battle between He-Man and his greatest enemy, Skeletor.” 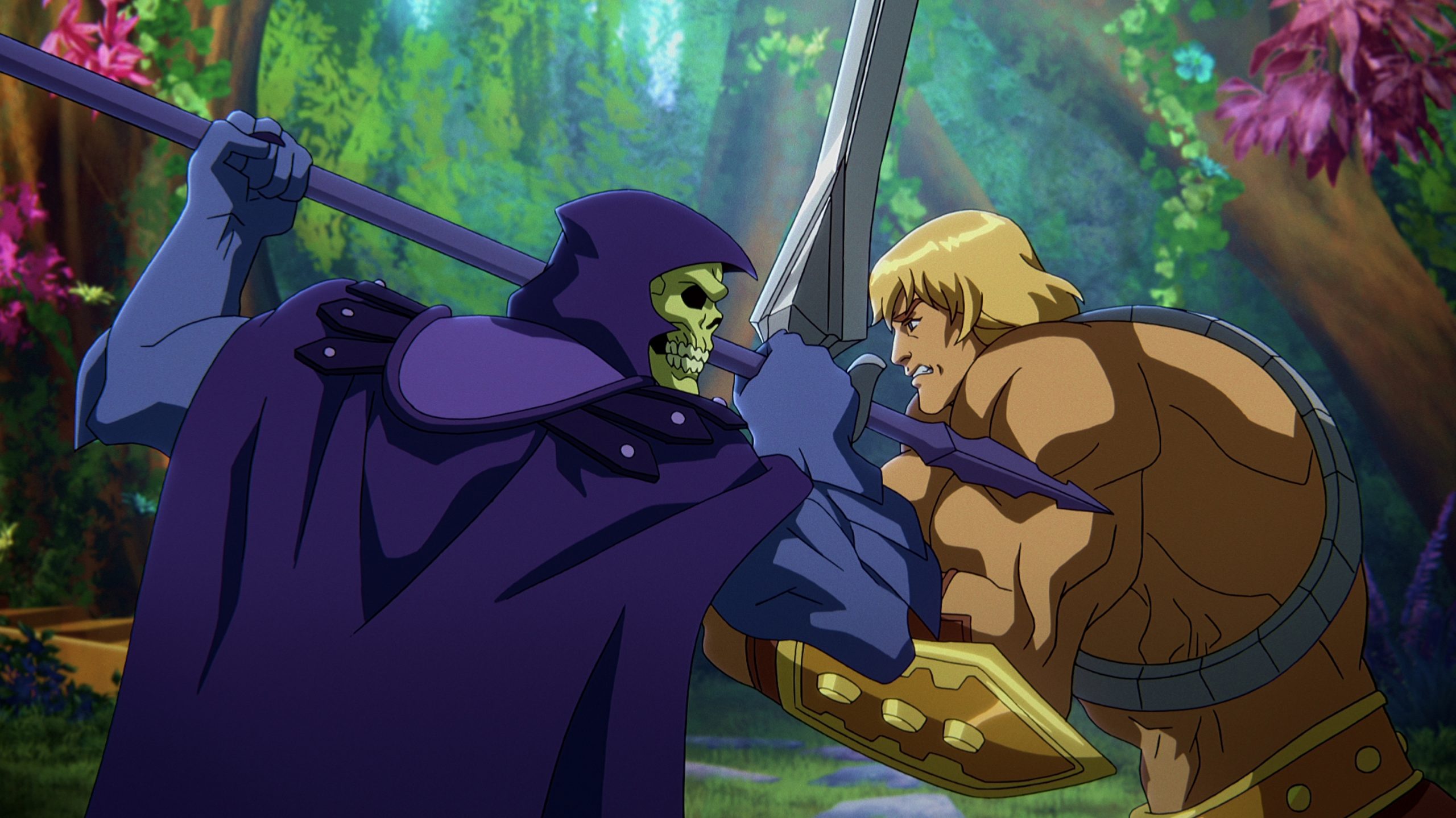 RELATED: Netflix Reveals Masters Of The Universe Creative Team Aimed To Design Teela “With A More Realistic Muscular Perspective” Inspired By Gal Gadot’s Wonder Woman And The Legend Of Korra

In turn, Smith would correct the outlet, “With all due respect to ScreenRant, I’ve read every Masters of the Universe: Revelation script for our shows (plus wrote a few) and viewed 4 amazing animatics. While Teela is as present as she’s always been in the MotU adventures and she plays a big role, our series is LITERALLY all about He-Man.” 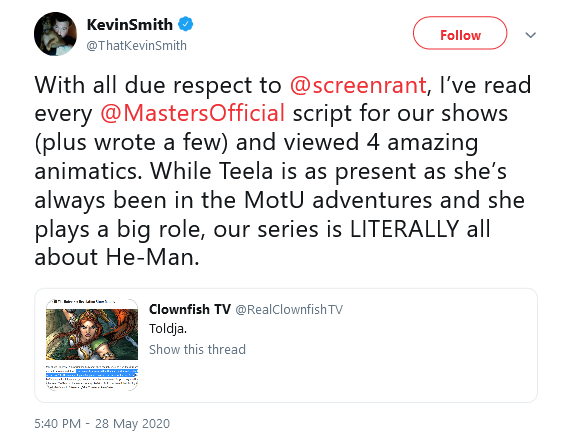 Smith would once triple-down on this lie in January 2021, meeting a Twitter user’s pointing to the presence of a He-Man figure in the series’ first wave of toys as proof that the theories of his sidelining were unfounded with the cheeky assertion, “Stop making sense.” 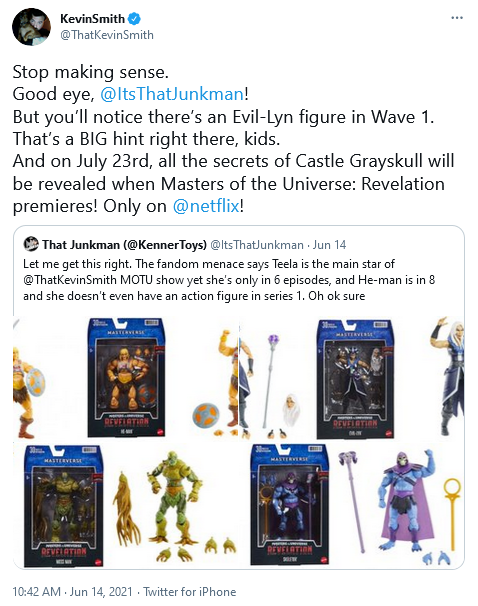 In a subsequent interview given to Screenrant in 2021, the showrunner himself all-but-outright confirmed Clownfish TV’s initial reporting, telling the outlet, “Revelation in the title – Masters of the Universe: Revelation – refers to Teela’s journey.

“Teela finds out something about her that was hinted at in the old legacy show,” he continued. “And that’s a kernel that we blew out and really played with in this show. So the revelation in question really has to do with Teela.” 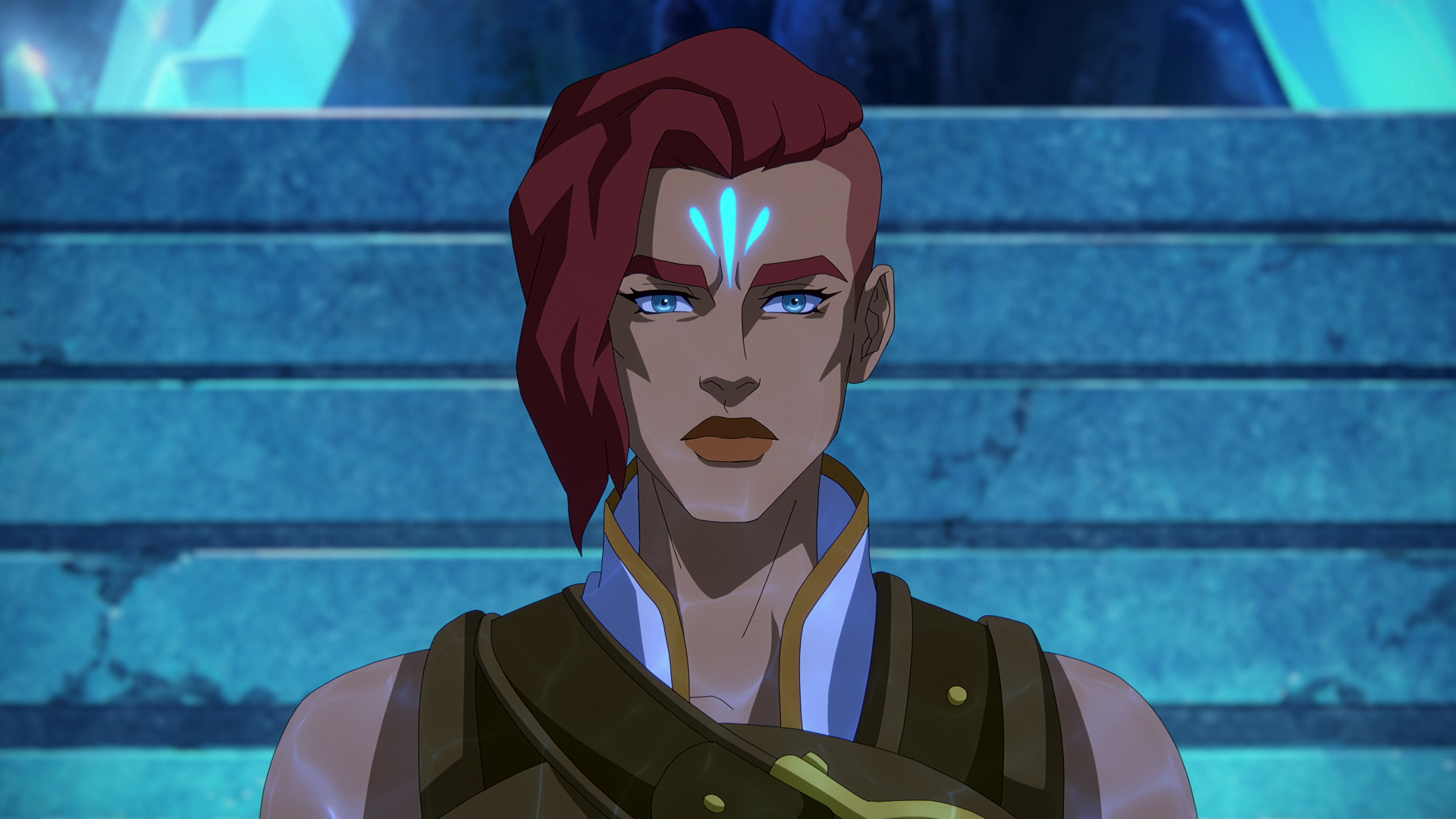 Ultimately, after the show aired and fans discovered that Smith had been less than truthful, the showrunner defended his decision by arguing, “If He-Man giving his life for the entire universe is stepping aside, then Tony Stark [in the Marvel Cinematic Universe] stepped aside. Jesus Christ stepped aside.”

“It’s a messianic moment, and if you follow classic literature, the hero’s arc, it’s where the hero has to go, eventually,” he explained to Orko voice actor Griffin Newman during an appearance by the latter on a Masters of the Universe: Revelation-themed episode of Smith’s podcast, FatMan Beyond. “You have to sacrifice your life for a cause greater than yourself.“ 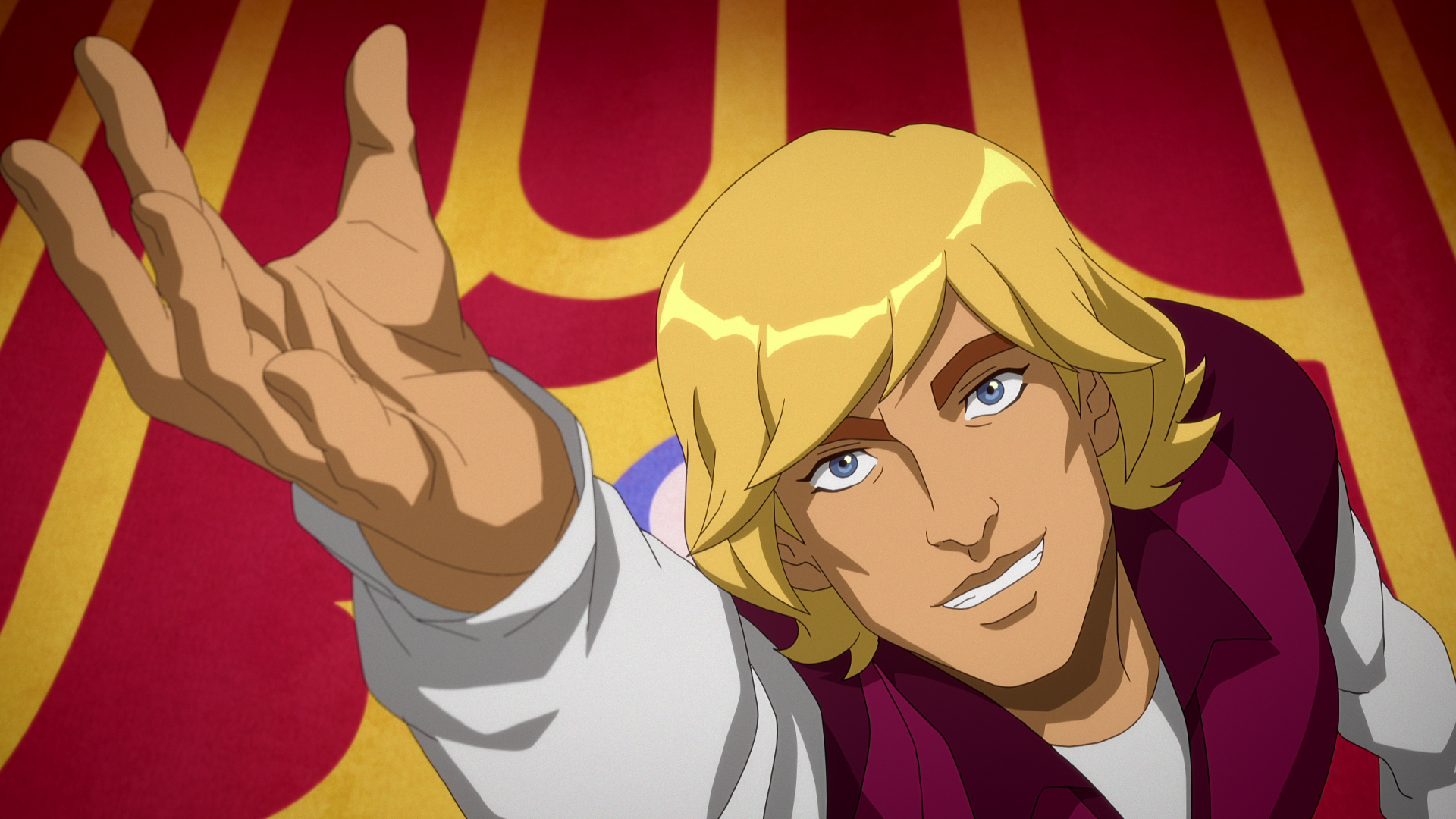 “When folks are going “oh man, you f—in’ emasculated He-Man”, I’m like, ‘By making him sacrifice himself by saving all of Eternia?’” Smith continued. “That’s not sidelining. That’s not stepping aside. That’s heroic. That’s the point of a hero.”

Turning to the specific accusations that he had lied about swapping He-Man for Teela, Smith justified his deception by exclaiming, “The thing that frustrates me so much about this ‘lie’ thing is that people are coming up, knocking on your door, and saying, ‘Is it true that this happens in episode 4?’ F—in’ nine months before the show comes out.” 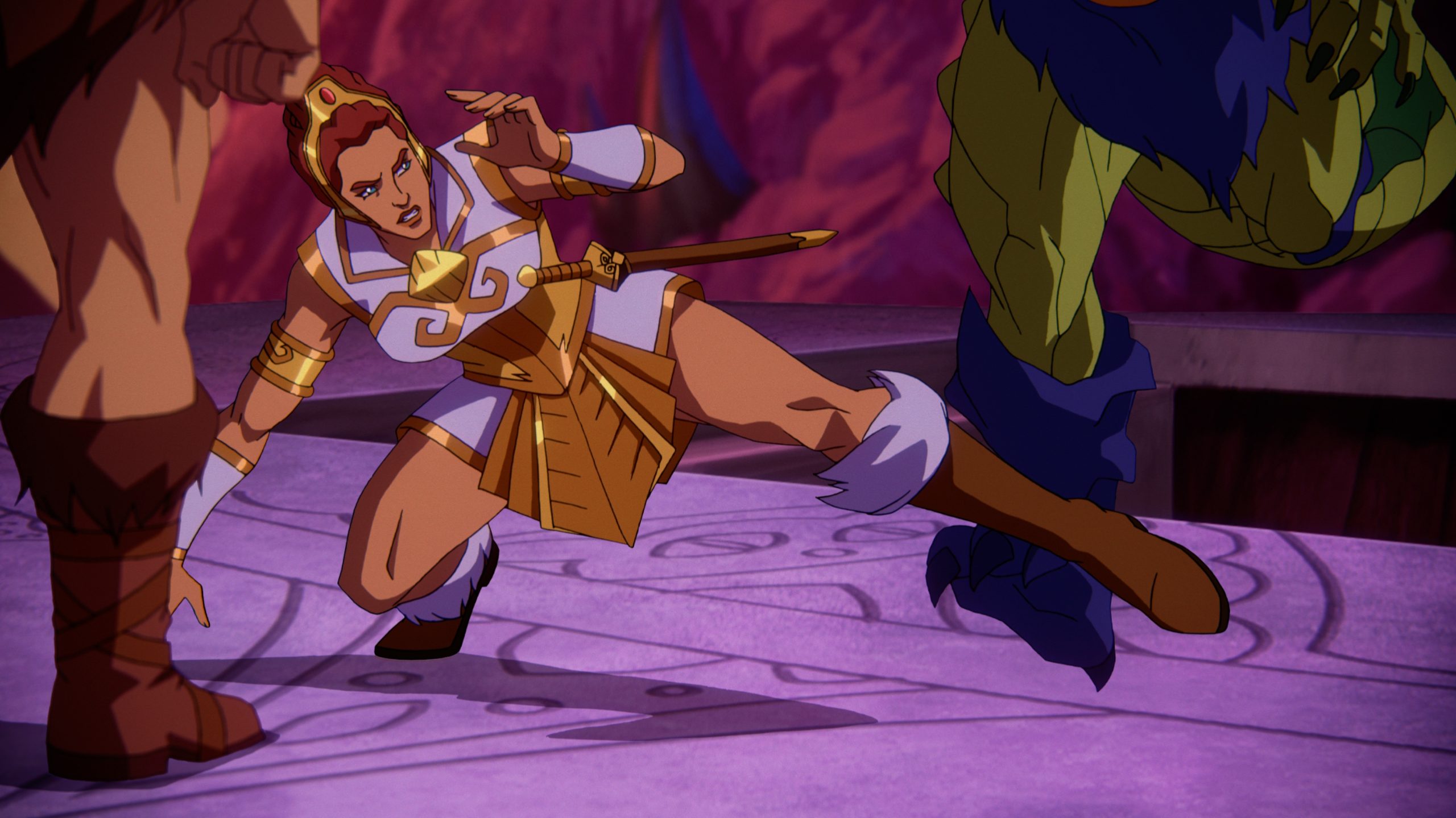 “I didn’t think I was tricky with the words,” he said. “I literally said, ‘Teela does no stepping aside’ [given how his sentence progresses, it’s unclear whether he meant something by this or simply confused He-Man and Teela], she has a friend who’s a girl but not a girlfriend, she does not wield the sword of power,” he stated. “I’ll tell you right now, here’s another spoiler. But she never wields the sword, ever, in any of the new episodes. So everything I said was God’s honest ‘f—in’ truth.”” 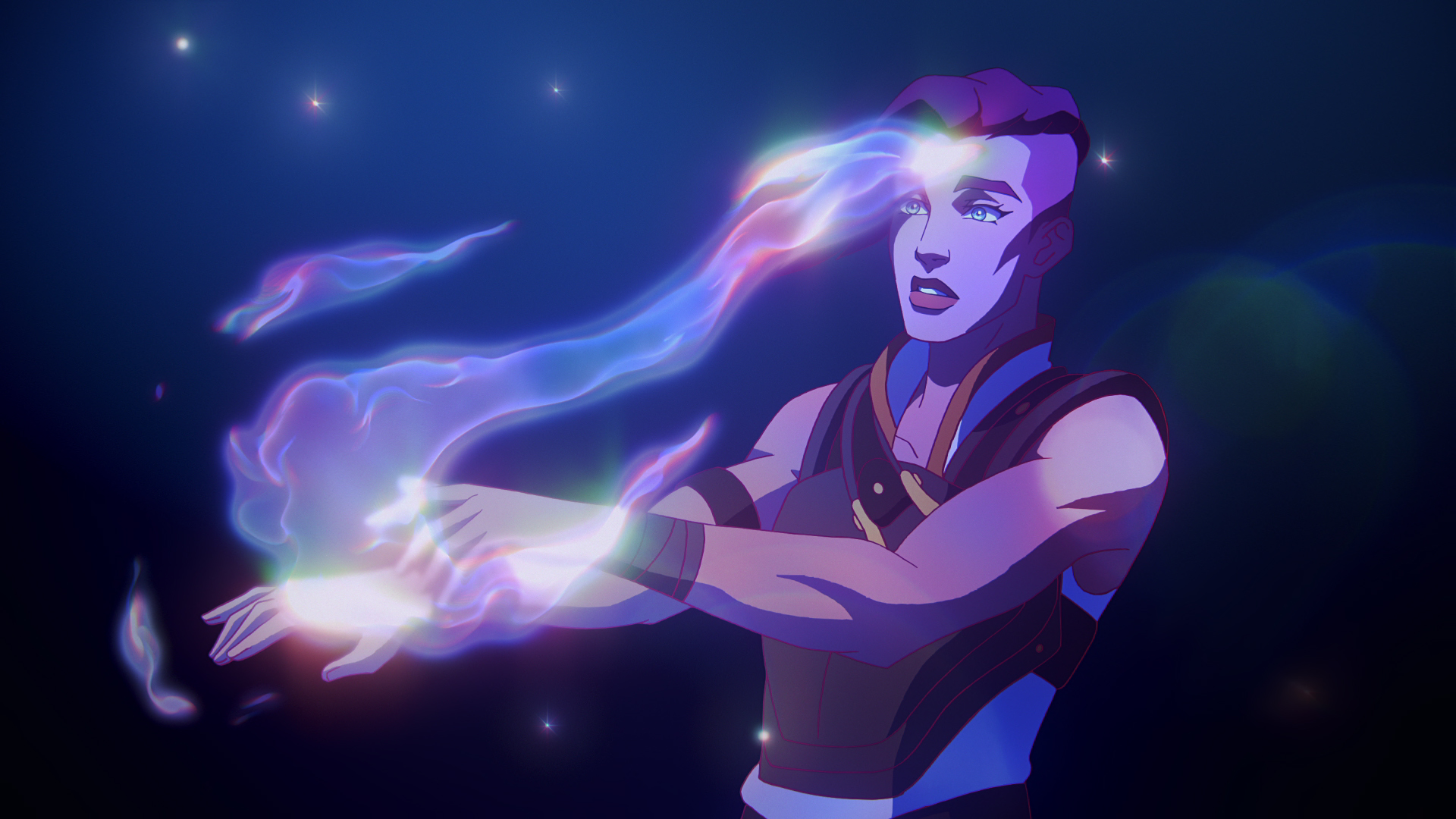 On the specific topic of his reaction to Clownfish TV’s now-provably-accurate reporting, Smith maintained, “People are saying ‘You lied to Clownfish [TV], you gotta apologize’ and I honestly f—ing believe, with my heart, I’ll put my child’s life on it – none of those things I said are f—ing lies. They’re all factual.”

However, he did apologize to the YouTubers “for leaning into it, tweeting, then hitting it again, tweeting again later on,” claiming that his responses to their reporting were made “simply to obfuscate from what I felt like was the thing that I didn’t want anyone to know” – that information being that Adam dies in the first episode of the series. 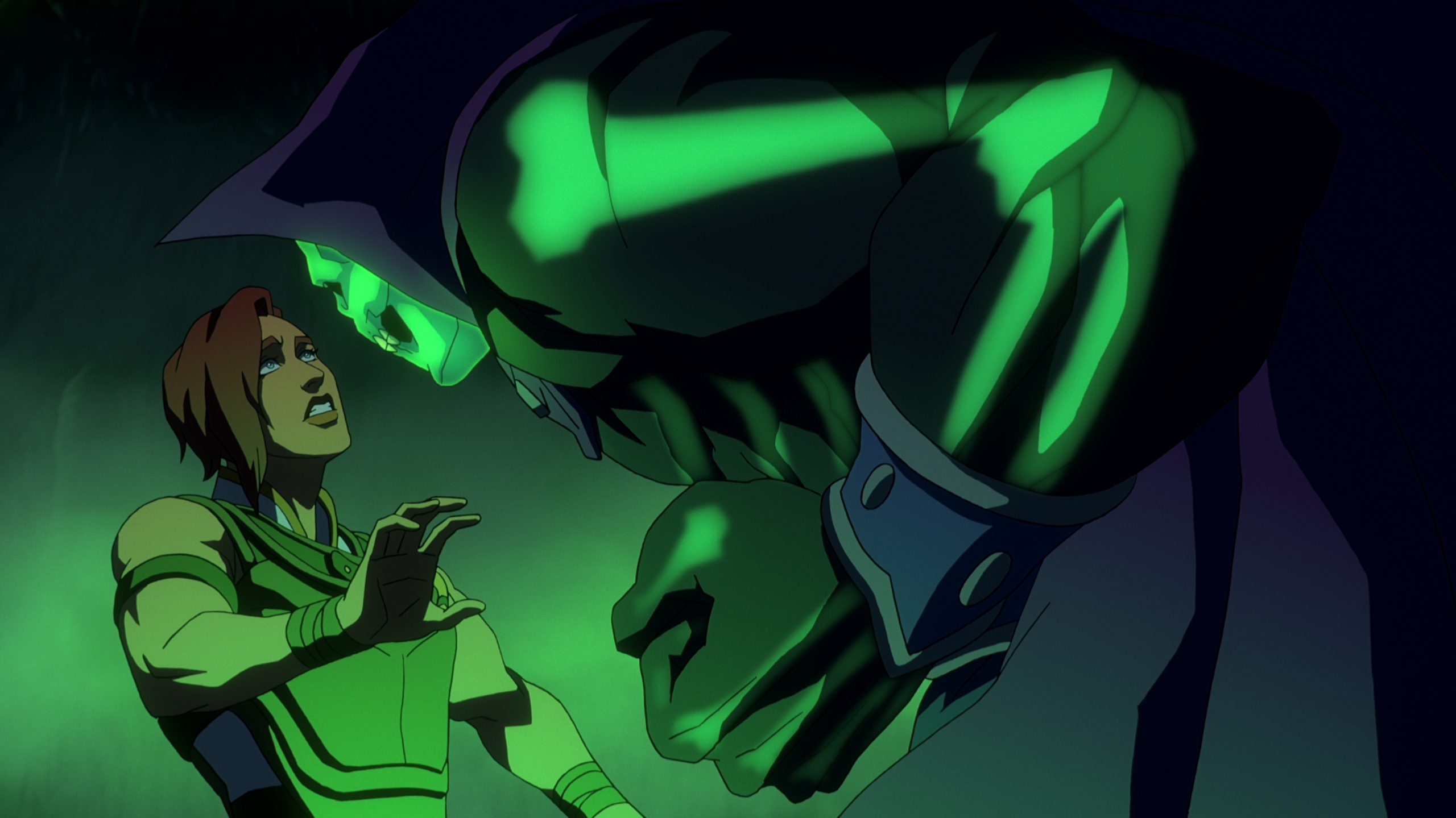 “While I was sitting there going ‘oh sh–, they’re going to start talking about [He-Man’s death in episode one],’ Smith recalled, “Over here, is [the conversation with Clownfish] that I can address. I could answer this, and maybe take attention away from this over here. And mercifully, [leaks of Adam’s death] never got louder, so people never knew.”

As of writing, Netflix has not confirmed a release date for Masters of the Universe: Revolutions.

NEXT: Netflix Director Claims King Grayskull and Andra Race Swapped in Masters Of The Universe: Revelations Because New Characters “Could Be Easily Rejected”