Former Gamergate personality Brianna Wu joined calls to boycott Hogwarts Legacy and claimed whether or not you participated in the boycott was a “character test.” 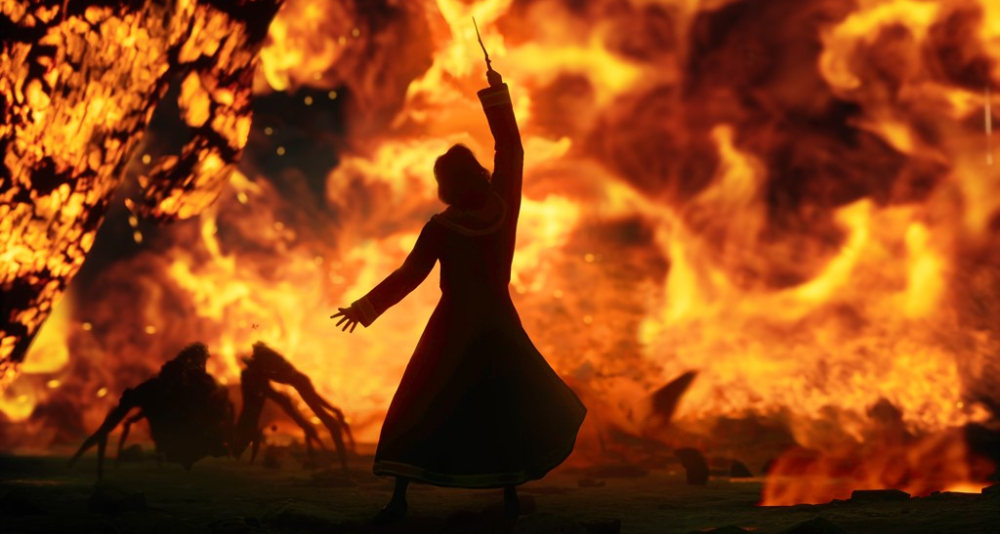 A unseen wizard is silhouetted by fire, along with a spider via Hogwarts Legacy (2022), Warner Bros. Interactive Entertainment

The game developer and failed political candidate issued her own call to boycott the game, tweeting earlier this month, “My position on Hogwarts Legacy is clear. I’m boycotting it. I think if you care about trans people you should too.”

Wu then added, “But, in what should not be a surprise to anyone, most gamers don’t care about trans dignity enough to sacrifice for them. By all accounts, it will sell very well.” 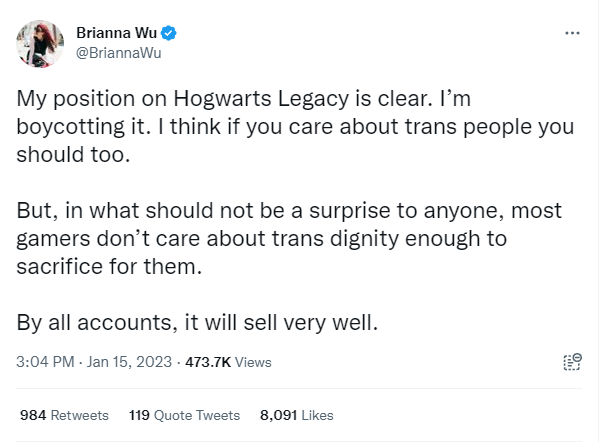 Wu then tweeted, “This outcome shouldn’t surprise me. Gamers care even less about trans dignity than they did about the women who make games having a sexual harassment-free workplace. But it is deeply saddening to see.”

In another tweet she wrote, “If the people who buy games expected more of the industry and of themselves we would solve a lot of problems. Less sexual misconduct, less open discrimination, fewer predatory practices with microtransactions. But we expect nothing, and receive nothing in return.” 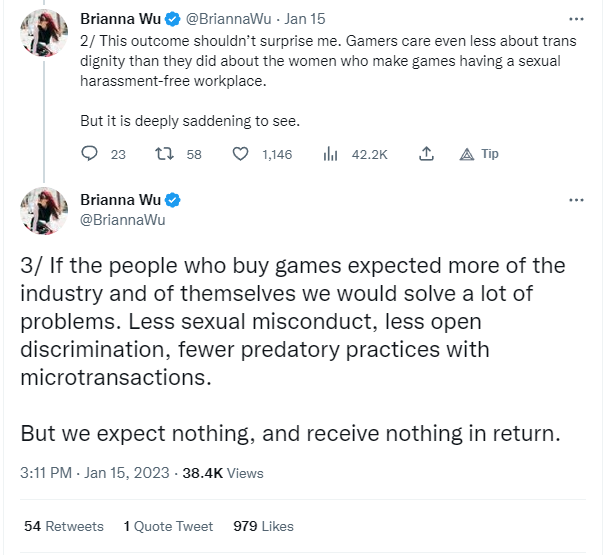 RELATED: Sebastian Croft Apologizes For “Hurting” Anyone By Voicing Male Main Character In ‘Hogwarts Legacy,’ Claims “There Is No LGB Without The T”

Next, Wu claimed that whether or not you joined in on the boycott it was “a character test.”

“Hogwarts Legacy isn’t a game. It’s a character test,” Wu tweeted. “And a lot of people are about fail it.”

The absolutist comment drew plenty of mockery with Huff4Congress responding, “Exactly! If you don’t buy Hogwarts Legacy, swayed by absurd concerns that Harry Potter’s beloved creator has supposedly committed some societal sin by standing against the rank misogyny of modern ‘transgender’ insanity, you’re a spineless coward without much character at all.” 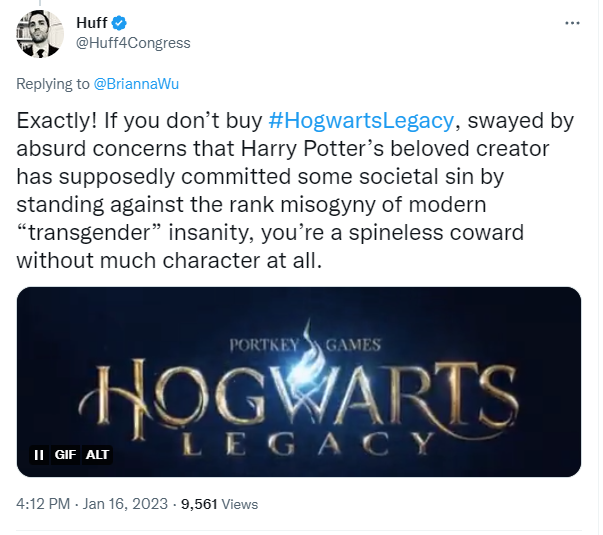 However, artist, teacher, and game designer Benjamin Sawyer attempted to rationalize with Wu. “Where do we land on the topic of the franchise existing beyond its creator and this game being the product of a generation of creators eager for people to play their game despite of Rowling? Are we punishing the wrong people by boycotting the game?”

Wu replied, but refused to answer. “The amount of rationalizations from otherwise intelligent people has been extremely disappointing,” Wu bemoaned, along with a rolling eyes emoji. 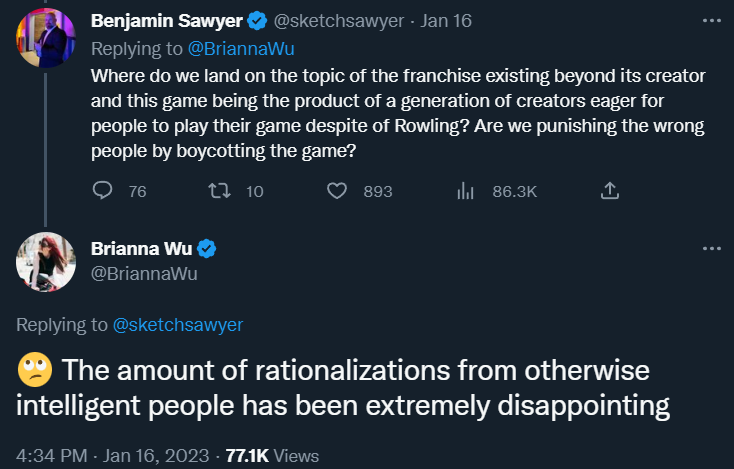 Archive Link Benjamin Sawyer asks if a boycott of Hogwarts Legacy would harm the developers by proxy. Brianna Wu curtly ignores him via Twitter

RELATED:  Xbox Head Phil Spencer Praises Video Game Devs Who Refuse To Fear “The Current Culture Of Criticism And Cancellation”, Calls On Industry To “Turn Away From Dividing Players And Creators”

“I was asking questions because I wanted to have a conversation,” Sawyer replied. “I have legitimate questions. Thanks for the eye roll though. Makes me feel real great.”

The snipe had little effect on Wu, who parroted back, “I cannot have a conversation with every single dude on Twitter trying to rationalize this. Read the comments. There are hundreds of you.” 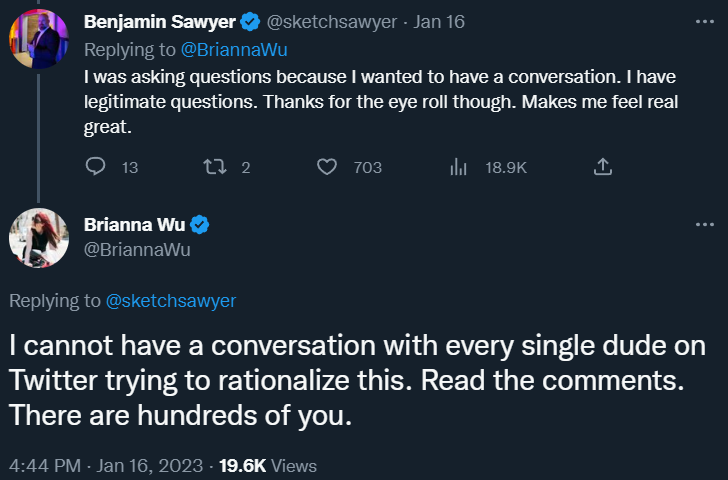 Archive Link Brianna Wu refuses to engage with Benjamin Sawyer over her push for a Hogwarts Legacy boycott, and any flaws it may have via Twitter

YouTube commentator and science fiction author Jon Del Arroz weighed in on Wu’s comments. He admitted Sawyer had a point about developers getting hurt more than Rowling, mocked Wu and the boycott as ridiculous, but expected it to escalate closer to launch.

“They [SJWs] don’t ever back down, they just keep going with these sorts of narratives all the time,” Del Arroz warned. Yet, he also noted that others had been inspired to support Hogworts Legacy purely to spite those boycotting it, or because the boycott brought the game to their attention.

Attempts to boycott Hogwarts Legacy have been ongoing, and seemingly continue to fail. Due to Rowling’s support of sex being real and rejection of the denial of the female identity have resulted in pro-transgender activists attempting to “cancel” her and encourage boycotts of her work. This includes adaptions of Harry Potter such as Hogwarts Legacy.

Amid claims of Goblins being antisemitic caricatures, lies that the game’s plot is about preventing a rebellion by an oppressed group, spamming Steam with false user tags, and claiming the game’s voice actors are anti-transgender — Hogwarts Legacy looks to be one of the first big games of 2023.

It’s the fourth global best seller on Steam as of this time of writing, just over two weeks away from its February 10th launch. 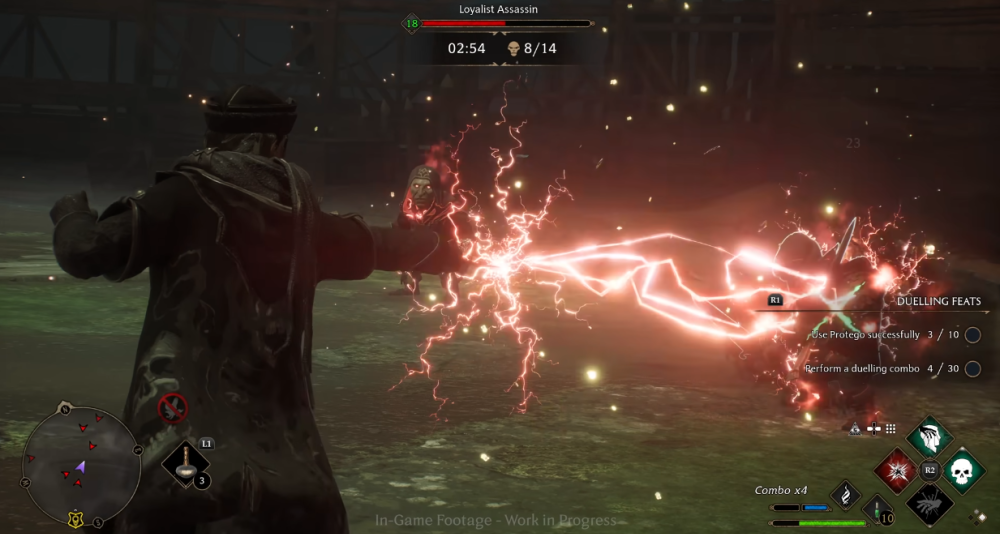 Wu previously called for a boycott at the beginning of January citing a claim that Rowling’s Pottermore digital publisher saw profits drop 40% in 2022 compared to 2021.

She tweeted, “F*** around and find out. This is why it’s really important for decent people to boycott Hogwarts Legacy.”

“I have a lot of friends in games media, but I will be cutting ties to anyone who promotes this,” Wu added. 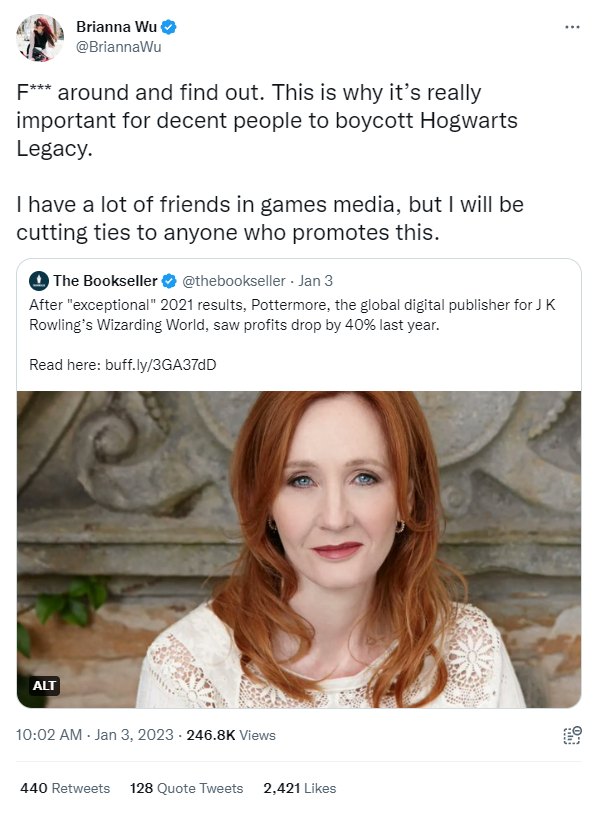 What do you make of Wu’s comments?

NEXT: ‘The Joker: The Man Who Stopped Laughing’ Writer Matthew Rosenberg Responds To Backlash Against Pregnant Joker Story: “This Isn’t An Allegory, A Metaphor, Or Social Commentary – It’s A Joke”