Superman is the quintessential super hero. As a paragon of heroic virtues he has always represented the best of humanity, its greatest potential. Of course, he isn’t a human at all. Which is why he can represent so perfectly our highest ideals. He is just like us, but without the things we have that hold us back.

He is greatness personified. 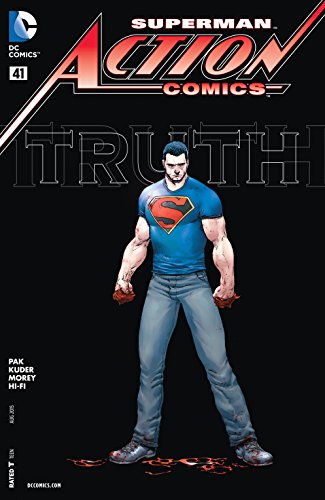 But a perfect character makes for a boring series of comics over time. For the sake of variety writers often introduce character flaws or power-draining macguffins to spice things up. Still, the most interesting Superman stories are those that embrace Superman’s unmatched strength – both of body and character.

Action Comics #41 and #42 offer something in between the typical “something is wrong with Superman” story arcs and the ones where he is an unstoppable force for good. Greg Pak and Aaron Kuder’s comics are about a Superman whose identity and powers have been compromised, but his moral standards have not.

Like many comics these entries deal with timely issues, joining with the likes of The X-Men, Watchmen, and many others. And like those others, Action Comics is receiving a great deal of criticism for doing so. For instance, Fox News recently published an article by Brian Henry with a serious bias against the book.

This shouldn’t be much of a surprise. Issue #42 ends with Superman slugging a cop with his blood-covered fist in reaction to their attempts to disperse the crowd. This is intentionally evocative imagery, clearly meant to create controversy and drive discussion. While Pak and Kuder have yet to comment on the uproar, I doubt they would deny that they intended to stir the pot with this plot line, and especially with the ending panels.

I’ve written previously about recent attempts to stifle free expression in comics. In those previous cases there was an extreme, knee jerk reaction. In fact, there were even calls for censorship. Action Comics #41 and #42 have certainly been subject to criticism, but it’s been relatively civil and grounded. 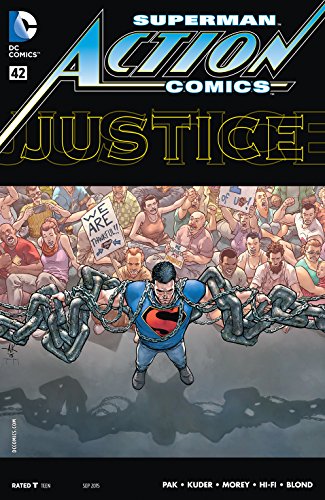 While the disparity between the criticism of recent comic book controversies and criticism of Superman fighting the police might tell us more about the differences between the offended audiences, I think it also says something about the way Pak and Kuder have decided to tackle the tension between citizens and the police.

The outbreak of violence in this case is partially due to a mistake on the part of responding law enforcement, as a cop in riot gear accidentally fires a tear gas canister into the crowd. Then a protester responds by calling for retaliation, causing the whole scene to fall into chaos. Both sides share blame.

To mirror some people’s take on this issue of police brutality even more, the whole thing was carefully orchestrated by outside agitators. The protesters and police are both being manipulated to ends of some unseen force.

Superman is put in a tough position, having to make a decision on the fly without all of the information. He does what seems right to him at the moment and defends the (mostly) innocent protesters. His intentions are clearly noble, but it leaves one wondering what negative consequences might come from his actions.

In the end this story arc is meant to be a focal point for discussion about a timely issue. Shockingly, the discourse surrounding it has been relatively tame. Pak and Kuder have crafted an unusually balanced and respectful allegory, even if it is politically charged.

I say kudos to them.