Let’s count down the Top 10 “hottest” superheroes of all time. 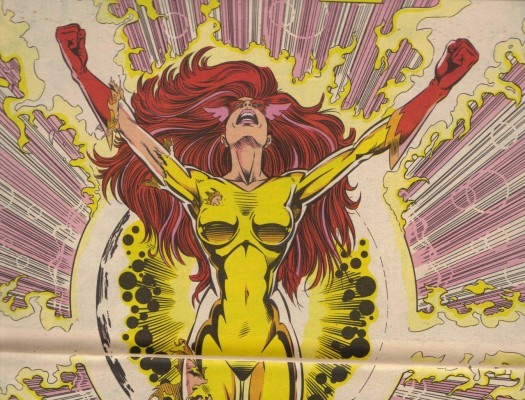 Firestar generates, redirects, and absorbs radiation and then manipulates it into microwave radiation, fire blasts, and light generation among others. Her ability to absorb radiation depends on her environment.

In certain environments she is able to take in cosmic rays and then deliver devastating attacks with the absorbed radiation. Firestar’s “hotness” depends on her environment and the amount of radiation she absorbs. 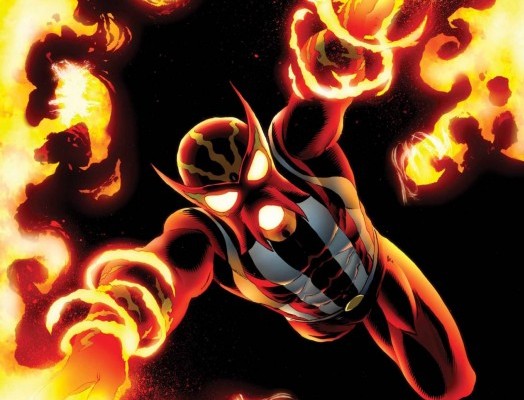 Sunfire has the ability to ionize matter and convert it into its superheated plasma state at temperatures around one million degrees Fahrenheit. He then discharges the plasma in force blasts primarily emanating from his hands.

In order to enhance his power, he absorbs both solar and electromagnetic energies. However, he requires an invisible field of psionic energy to protect him from his own powers and other outside sources. 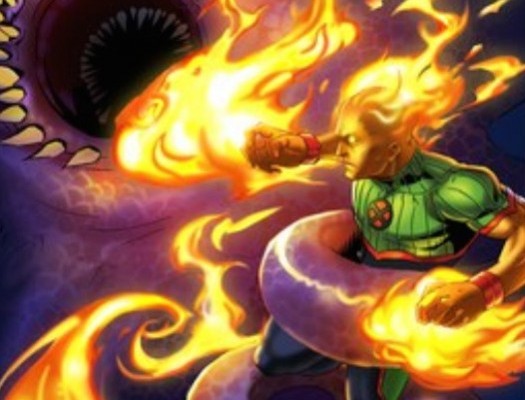 Match is the mutant name for Ben Hammil and he is the first on our list to truly have the ability of pyrokinesis. His head and body are constantly producing his heat, but he is able to control his temperature in order to protect his clothes from going up in smoke.

His head is constantly aflame; however, the flame is not as hot as what it appears and does not burn upon touch. However, be wary when Ben’s short temper is unleashed and he really turns up the heat! 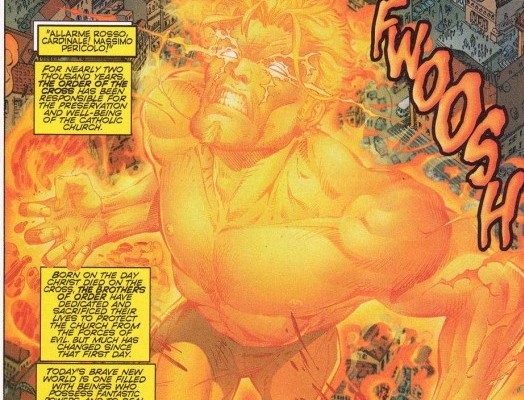 Burnout or Bobby Lane is another pyrokinetic coming to us from publisher Wildstorm. He is able to create high-energy plasma which is converted into bursts of flame when exposed to oxygen.

He uses his flame abilities to create thermal energy blasts as well as a fire shield to deter physical attacks. Of note, he has the ability to generate heat from his own body. 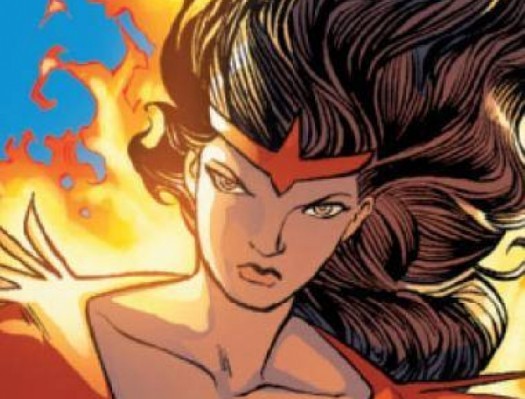 Firebird is another superhero with the ability of pyrokinesis and our first female on the list. She received her ability from an alien experiment. She is the first on our list to be able to absorb heat and then use the absorbed energy to return fire.

Like many on our list she is able to generate and emit flame projectiles. Her signature fiery projectile takes the shape of a mystical firebird. Her flames have been known to melt steel, bullets, and turn solid rock molten. 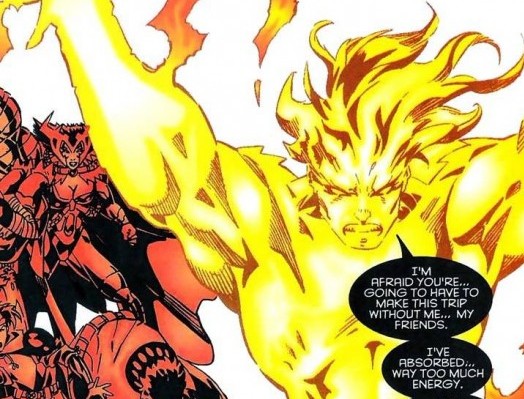 Sunspot was experimented on to ensure his mutant gene continuously evolves. This allows his powers to become stronger as time passes. Much like our earlier entries he has the ability to absorb solar energy, but this only gives him enhanced strength.

What puts him on our list is his ability of thermokinesis, allowing him to not only project heat in intense waves, but also draw heat into his body to lower the immediate temperature of his surroundings. He also can fire dark plasma energy blasts from his hands with 20 tons of force behind them. 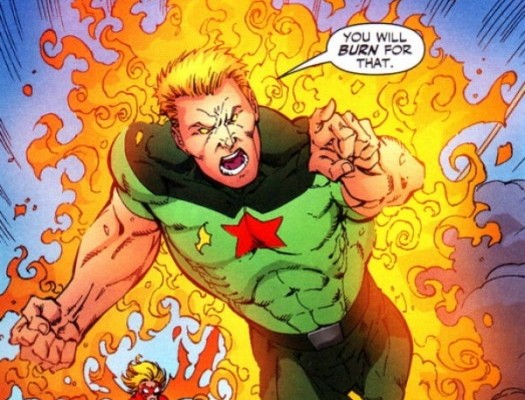 Leonid Konstantinovitch Kovar is a Russian patriot and die-hard believer in communism. As a teenager he was involved in the investigation of an alien spaceship which, upon explosion, granted him numerous abilities, namely pyrokinesis.

His pyrokinesis stands out from others on the list due to the fact he is able to channel the power of a red sun and effectively negate the abilities of Kryptonians. 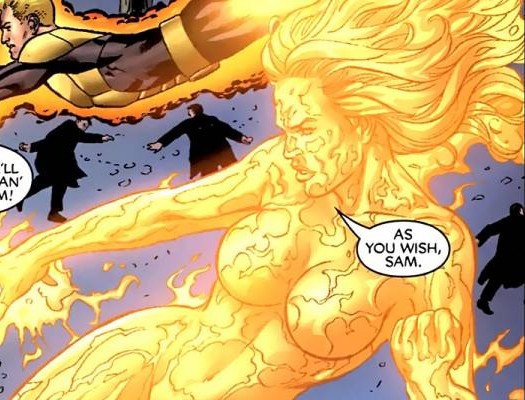 Magma like many of our entries on the list has the ability of pyrokinesis. Her body has been built to withstand her own powers and she is able to superheat rocks to form lava which she is then able to project.

She is also able to project lava blasts of various degrees of heat from her own body without converting rocks to lava. She has been known to create a volcano in the middle of Manhattan as well as hold a planet’s core together. 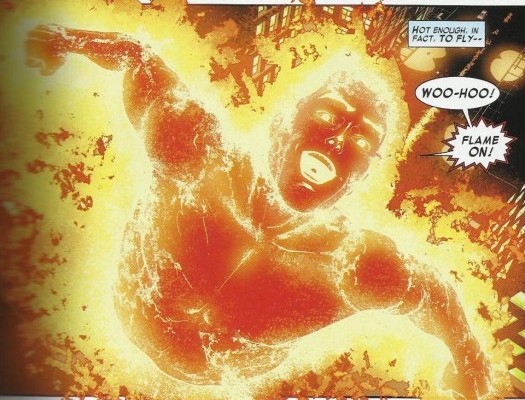 You thought Johnny Storm would be #1 didn’t you? Nope. Storm ranks number three on our list. His ability to generate a nova-level burst clocking in at one million degrees Fahrenheit earns him this position. However, once he performs this burst his powers are extinguished and he has to recharge.

He does become cosmically enhanced by Galactus amplifying his powers, but this too eventually fades after Galactus is transformed into a humanoid form. 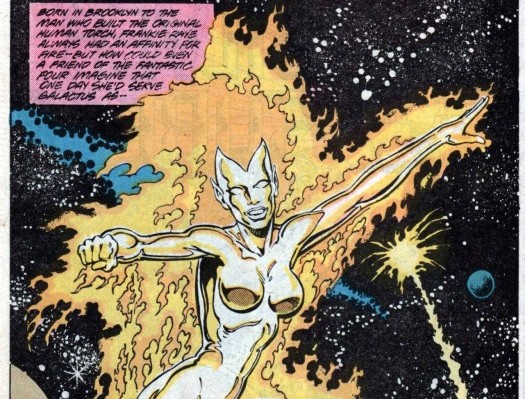 The crown of the hottest female superhero alive belongs to Nova or Frankie Raye. After a terrible accident involving unknown chemicals, Frankie Raye’s dormant powers are unveiled which are very similar to The Human Torch’s flame generation.

However, the reason she tops The Human Torch is her willingness to become the herald of Galactus. Galactus infuses her with cosmic energies allowing her to use stellar fire and any type of energy possessed by a star. 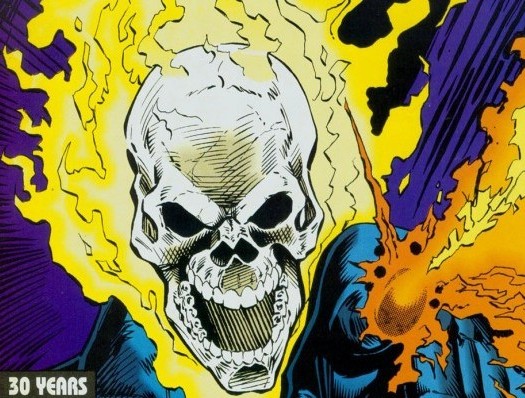 He is the hottest man alive. He wields the supernatural Hellfire which burns so hot it not only burns flesh but sears the soul. He has manipulated Hellfire into the shape of a motorcycle capable of supernatural speeds and physics-defying stunts.

Not only does he have a Hellfire motorcycle, his weapon of choice is his Hellfire Enchanted Chain used to snuff the life from his enemies. He has even used a shotgun to discharge Hellfire at his enemies.

If this wasn’t enough, he can unleash his ultimate weapon, the Penance Stare, that has the ability to not only incinerate but to mutilate the souls of his victims.

Now that we have gone through our Top 10, who do you think we left out? Who would you add and what are your Top 10 Hottest Superheroes? Tell us below in the comments.