Suicide Squad was a surprising film, in many aspects. David Ayer’s film attempted to turn DC’s villains into their newest heroes. It didn’t work. There were some interesting details and performances in the film but most everyone agrees it was more miss than hit. But audiences showed up leading the film to gross $745 million dollars at the worldwide box office.

Since then, writer and director David Ayer has both apologized for the film and answered fan’s questions about the production. A number of those questions included many about his and Jared Leto’s interpretation of the Joker. Everyone knows the Joker has his own style. He’s enjoyed leaving his mark on Gotham for years. In Batman v Superman: Dawn of Justice the results of one such “mark” is seen in the Batcave. 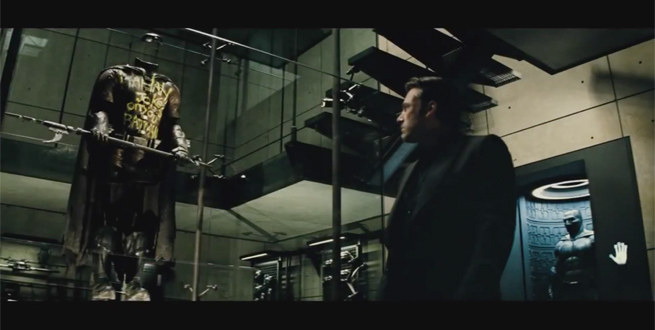 The Joker killed Robin and left a message for Batman on his suit. Mocking both Batman and the life he just took. Sounds like Joker alright. Suicide Squad’s marketing campaign made clever use of the character’s desire to make his mark on the world. Plenty of toys and posters took advantage of the Joker’s “tagging” style. Including some unique interpretations of the Batman costume, which led to speculation.

During the promotion of the film this life-size statue was shown at several conventions. It features Jared Leto’s Joker wearing a custom, “Jokered” Batman costume. 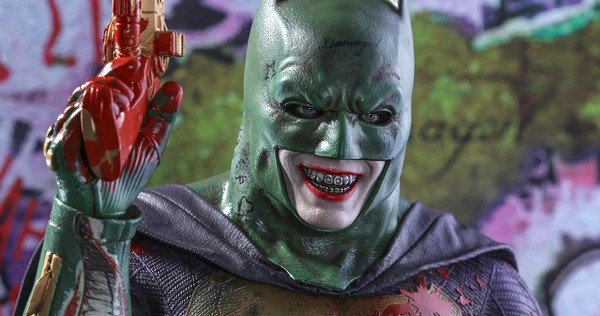 It’s an interesting concept. In the comics, Joker is notoriously obsessed with Batman. The fact that the Joker would play dress-up as his own version of Batman is very much in character for the Clown Prince of Crime. It’s so in-character that many fans thought it would be in the movie in some capacity. It wasn’t, leading many to believe it was left on a Warner Bros. cutting room floor. But now Ayer has chimed in and settled the matter.

In response to a question about Joker wearing the Batman suit in Suicide Squad Ayer states:

This was only a toy concept. No wardrobe like this was created. https://t.co/L0PUAK47Yp

A little disappointing but not the least bit surprising. The Joker was barely in the final film. What little time he spent in the film was about his relationship with Harley Quinn and little else. Despite Batman chasing the pair down, Joker barely discusses his less-colorful half. Whether or not audiences will get to see the dynamic between Leto’s Joker and Ben Affleck’s Batman remains to be seen.

Until then, many will continue to speculate about the seemingly endless list of missed opportunities that lie at the feet of 2016’s Suicide Squad.