The four-minute digital shorts will lead into the feature-length film titled, Marvel Rising: Secret Warriors. Everything is written by Mairghread Scott, whose worked on other animated projects such as Guardians of the Galaxy, Transformers Prime and G.I. Joe: Renegades.

In a video promoting the new franchise, Marvel Rising is described as “the next generation of Marvel heroes for the next generation of Marvel fans.” Sara Amanat, Marvel’s Director of Content & Character Development added her own thoughts, “This project is unlike anything we’ve done before—from featuring the rising and fan-favorite stars of the Marvel Universe, to a visually distinct animation style, this is a groundbreaking animated event. It’s an action-packed adventure, full of comedy, heart and powerful messages for every kind of Marvel fan.”

Marvel’s Senior Vice President of Animation & Family Entertainment Cort Lane added, “Marvel characters are so relatable because they live in our world and face the same challenges we do. So I’m very excited that our Marvel Rising team of heroes is so inclusive, reflecting characters with different backgrounds, particularly a set of strong female leads that our young audience can connect with.”

The franchise will star Gwen Stacy aka Ghost-Spider (you might know her better as Spider Gwen). She will be joined by a number of Marvel’s newest and most controversial characters including Ms. Marvel, Squirrel Girl, America Chavez, and Captain Marvel. They will be joined by Quake, Inferno, Exile, Patriot, and Glory. The series will see the team face-off against Kree Accuser Hala. It will also feature Captain George Stacy, Gwen’s fiercely protective father and NYPD Chief. Also along for the ride is Lockjaw and Tippy Toe.

Marvel is bringing some A-list talent to voice these characters. Gwen Stacy aka Ghost-Spider will be voiced by Dove Cameron. Agents of S.H.I.E.L.D. star Chloe Bennet will reprise her role as Daisy Johnson aka Quake. However, this is a much younger version of Daisy Johnson than the one on Agents of S.H.I.E.L.D. Tyler Posey will voice Dante Pertuz aka Inferno. BooBoo Stewart gives voice to Victor Kohl aka Exile. Kathreen Khavari will voice Kamala Khan aka Ms. Marvel, Milana Vayntrub will be Doreen Green aka Squirrel Girl, Cierra Ramirez will be America Chavez, Kamil McFadden will be Rayshaun Lucas aka Patriot. Skai JacksFron will be Gloria “Glory” Grant. Kim Raver of Grey’s Anatomy will take on Carol Danvers aka Captain Marvel.

Fellow Agents of S.H.I.E.L.D. cast member Ming-Na Wen will portray the villainous Hala. Captain George Stacy will be voiced by Steven Weber and Dee Bradley Baker will lend his talents to Lockjaw and Tippy Toe. 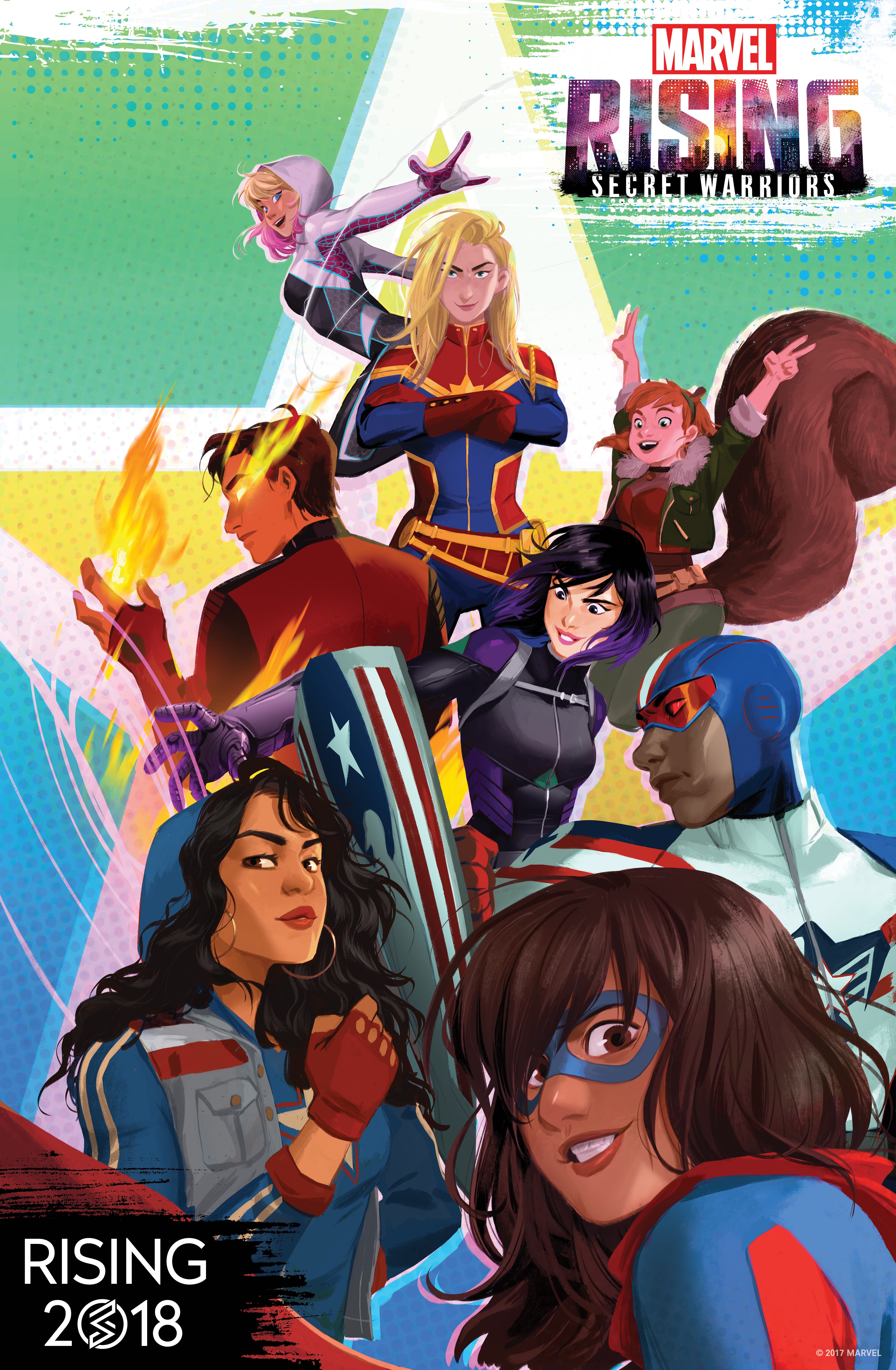 Here’s the official descriptions of each of the characters:

Gwen Stacy aka Ghost-Spider (formerly Spider Gwen) voiced by Dove Cameron (“Descendants,” “Hairspray Live”) – a free spirited teen who found her calling to be a super hero after being bitten by a radioactive spider and gaining spider-like powers. As Ghost-Spider, she aids those in need, but has to keep her alter-ego a secret from her father, Captain George Stacy, who sees Ghost-Spider as more of a menace than a hero.

Daisy Johnson aka Quake voiced by Chloe Bennet (“Marvel’s Agents of S.H.I.E.L.D.,” “Nashville”) – a leading agent of S.H.I.E.L.D. whose tendency for rule-breaking gets her into trouble now and then. Daisy befriends the young group of heroes and through them discovers how to become a better leader. She can generate powerful vibrational waves, which produce effects similar to earthquakes.

Dante Pertuz aka Inferno voiced by Tyler Posey (“Teen Wolf,” “Lincoln Heights”) – a brooding, dark loner on the run. Dante has the power of pyrokinesis, which makes him capable of generating flames – however, he is not fully in control of his fiery abilities. It’s a thin line between good guy and villain for the unpredictable Inferno.

Victor Kohl aka Exile voiced by BooBoo Stewart (“Descendants,” “The Twilight Saga”) – a charming, handsome, and troublesome young Inhuman whose quest for superiority places him into the wrong crowd. He can use Darkforce energy to create weapons and portals that allow him to teleport.

Kamala Khan aka Ms. Marvel voiced by Kathreen Khavari (“Marvel’s Avengers Assemble,” “Big Little Lies”) – a devoted fan of Super Heroes, especially of her mentor Captain Marvel; she is determined that she too can be a great hero! If only she’d be taken seriously. Kamala is equipped with metamorphic powers that allow her to stretch, enlarge, or shrink her overall size, parts of her body, or alter her physical appearance. She is especially fond of “embiggening” her fists.

Doreen Green aka Squirrel Girl voiced by Milana Vayntrub (“Marvel’s New Warriors,” “This Is Us”) – the uber-positive, hilarious best friend and teammate of Ms. Marvel. With advanced computer skills, enhanced strength, agility, durability, and senses of a squirrel, Doreen (along with her squirrel partner, Tippy Toe!), is primed and ready to become a successful hero.

America Chavez voiced by Cierra Ramirez (“The Fosters,” “The Secret Life of an America Teenager”) – a strong, independent young hero whose painful past drives her to reject leadership and remain a loner. America’s powers include superhuman strength, speed, and durability, plus the ability to fly.

Rayshaun Lucas aka Patriot voiced by Kamil McFadden (“K.C. Undercover,” “Grown Ups 2”) – a natural born leader who is quick to leap into action to impress his colleagues at S.H.I.E.L.D. Rayshaun strives to live up to Captain America’s legacy with integrity, honesty, and order above all. His skills include heightened strength, speed, stamina, and durability.

Gloria “Glory” Grant voiced by Skai JacksFron (“Bunk’d,” “Jessie”) – Gloria, or ‘Glory,’ is Gwen Stacy’s friend and member of their garage band “The Emm-Jays.” Gloria is a smart, hard-working girl that genuinely cares for Gwen, but has felt a distance growing between them ever since their friend, Kevin, was murdered. When being casual, Gloria’s known to be funny, sarcastic and sassy.

Carol Danvers aka Captain Marvel voiced by Kim Raver (“Grey’s Anatomy,” “24”) – a bold leader who doesn’t sugar-coat and is guided by a strong sense of duty and honor. She’s the ultimate inspiration for our band of misfit heroes. She is equipped with superhuman strength, can fly at high speeds, and can project intense energy blasts.

Hala voiced by Ming-Na Wen (“Marvel’s Agents of S.H.I.E.L.D.,” “Mulan”) – Hala is a Kree Accuser bent on galactic domination. She’ll go to any length or treacherous means to achieve what she, and the entire Kree race, wants: Power. Hala is cold, cryptic and nefarious, often challenging those who try to oppose her.

Captain George Stacy voiced by Steven Weber (“13 Reasons Why,” “NCIS: New Orleans”) – Chief of the NYPD and Gwen Stacy’s loving, but fiercely protective father. Captain Stacy is a very disciplined, hard-working man that will stop at nothing to obtain justice – who unfortunately sees Ghost-Spider as a menace and a threat to society.

Marvel Rising is set to launch in 2018. It is executive produced by Joe Quesada, Dan Buckley, Cort Lane, and Eric Radomski. Co-executive producers include Stan Lee, Sana Amanat, and Marsha Griffin. Alfred Gimeno will be the supervising director on the project.