The recent business news feeds and comic book news feeds have been inundated with news about the Disney acquisition of Fox properties. More particularly for our comic book world, the arrival of the X-Men and Fantastic Four to the MCU. When the deal was first announced, James Gunn (Guardians of the Galaxy, Guardians of the Galaxy: Vol. 2) was particularly happy about the X-Men returning to the MCU. In a series of tweets about the deal, he put up a number of pictures featuring X-Men characters.

While there are many aspects to Disney’s acquisition of 21st Century Fox’s assets, I am personally incredibly happy about it, for obvious reason.

Just saw this guy pulling up next to my office. pic.twitter.com/7oH9kjrR4D

With the Disney acquisition, the once Fox properties are now opened up to Gunn. Much of what he has had to offer for the Guardians, he now has an open playground with all of the intergalactic characters Marvel has to offer. Potentially he could put Galactus, the Skrulls (even though they had sort of a shared-agreement to the IP already), the Shi’ar Empire and the M’Kran crystal, Annihilus, and Doctor Doom in any one of his future films.

In a tweet response to Knocked Up director Judd Apatow, Gunn expressed particular interest in one character from the Fox side of the franchise:

I was thinking more about, like, you know, the Silver Surfer, but this is a valid point as well. https://t.co/KlpIjfG4qE

Fans are looking at this and speculating whether the next Guardians of the Galaxy film will feature the Silver Surfer. It would only make sense, since the Guardians have already encountered a living planet already. Why not the herald of the planet eater (and, by implication- Galactus)? Even more appropriate that James Gunn, already considered the cosmic director for the MCU, to have a plan for the cosmic characters coming into the MCU from this Disney/Fox deal. 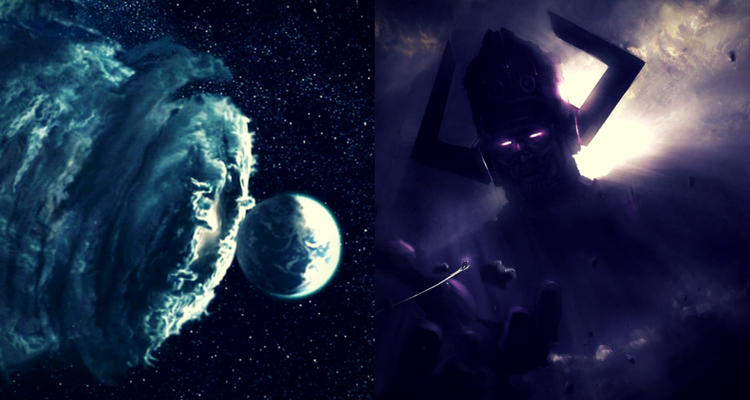 The last iteration of the Silver Surfer was lauded by comic book fans for his appearance in Fantastic Four: Rise of the Silver Surfer. The movie itself wasn’t a strong box office performer. However, audiences loved the writing for the Silver Surfer’s character aided by Lawrence Fishburne’s voice acting. The problems with the movie were with its continuing campiness, as well as the adaptation of Galactus on screen.

Taking on the Silver Surfer and Galactus, in their original iterations from the comics, might serve the MCU better than it has for Fox. We only need to look at the success of Thor: Ragnarok and how heavily they used Jack Kirby’s artistic style. We’re hoping that Marvel has learned their audiences would be more receptive to the outlandish style of Galactus’ original costume. Plus audiences were introduced to that imagery with Guardians of the Galaxy: Vol. 2 when Ego was riding on top of his spacecraft to save the Guardians from the Sovereign assault. Considering all this, Gunn isn’t saying anything too outlandish for audience expectations for the next 20 MCU films.

However, he might be jumping the gun because recent news about the Disney deal reveals it may potentially violate antitrust laws. Only time will tell whether we will get to see his version of Norrin Radd and the Power Cosmic.