The matchup was first posed in the pages of a DC versus Marvel comic book which saw Nightwing evading Gambit’s attack before Batman showed up to help him. 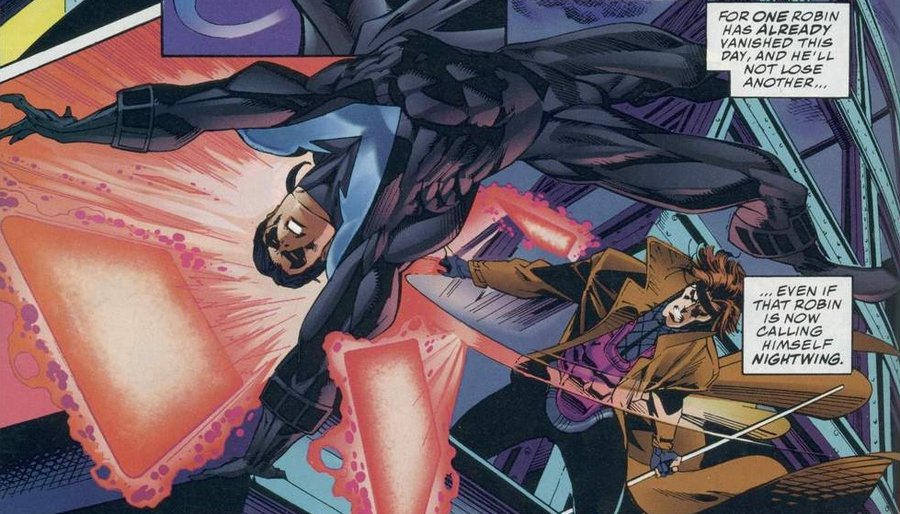 However, when Batman and Nightwing were talking, Gambit escapes and steals the Batmobile alongside Wolverine. The fight never had a real conclusion.

If the two had a rematch and the fight went the full tilt who do you think would win? Would Nightwing’s acrobatics and advanced Wayne technology give him an edge over Gambit’s mutants powers?

Bat in the Sun decided they wanted a conclusion to the interesting duel posed in the comic books and featured the fight in one of their earliest episodes of Super Power Beat Down.

The fight starts at around the 2 minute mark with a very interesting premise. Gambit has stolen a briefcase from Wayne Enterprises. Oracle informs Nightwing of the theft and the hunt for Gambit begins!

Nightwing eventually disarms Gambit and looks for a final blow. However, that’s when Gambit pulls out the Ace up his sleeve. He showcases his mutant powers and easily destroys Nightwing’s Escrima Sticks. He then pulls out his cards and launches a deadly attack that sends Nightwing flying through a wall. As Gambit tries to escape with the Wayne Enterprise suitcase, Nightwing cuts him off. But Gambit is ready with his cards and sends an array flying after him.

Will Nightwing be able to recover and defeat Gambit before he escapes. Or will the Ragin’ Cajun finally due in Dick Grayson?

Watch above to see who won!

Want to see more Super Power Beat Down fights? Check out Superman vs Thor as the Man of Steel battles the God of Thunder!

Share with your friends and family to see a gritty, street fight between Nightwing and Gambit!