A Bridge Between Worlds

Spider-Man: Into the Spider-Verse will be the first major animated film release from Sony and Marvel. Miles Morales is the star of the show! A first time for the famous Spider-Man. The geniuses behind The Lego Movie and the former former directors of Solo: A Star Wars Story, Phil Lord and Chris Miller, are helping to usher in this new age of Spidey. But they aren’t the only talent on board. Recently, it was announced that Tom Hardy would also be providing the voice for Venom in the animated feature. John Krasinski is expected to voice Peter Parker.

But there could be major implications behind one of those casting choices. Sony is pretty keen on making Spider-Man into a franchise. Yes, they partnered with Marvel Studios to have Tom Holland’s Spider-Man in the Marvel Cinematic Universe (MCU). That benefited both studios greatly. It allowed for his inclusion in Captain America: Civil War as well as the upcoming Avengers: Infinity War. Last year Tom Holland got his feature film debut as Spider-Man with the wonderful Spider-Man: Homecoming. But there’s been quite a few discussions about how long this partnership will last. Well, Spider-Man: Into the Spider-Verse could have already revealed the future of Spider-Man at Sony: Miles Morales.

Since John Krasinski is playing an older Peter Parker in the film, Tom Holland probably won’t have a cameo in the animated film. But Peter Parker has been rumored to play a part in Tom Hardy’s Venom film. So a lot of fans have wondered when behind the scenes photos or a big announcement was going to come about Tom Holland’s cameo in the other side of the Sony Spider-Verse.

Well, the announcement hasn’t come because it probably isn’t happening. Why? Because for once Sony is looking to the future. Remember all of the jokes about Peter Parker getting re-cast over and over again? 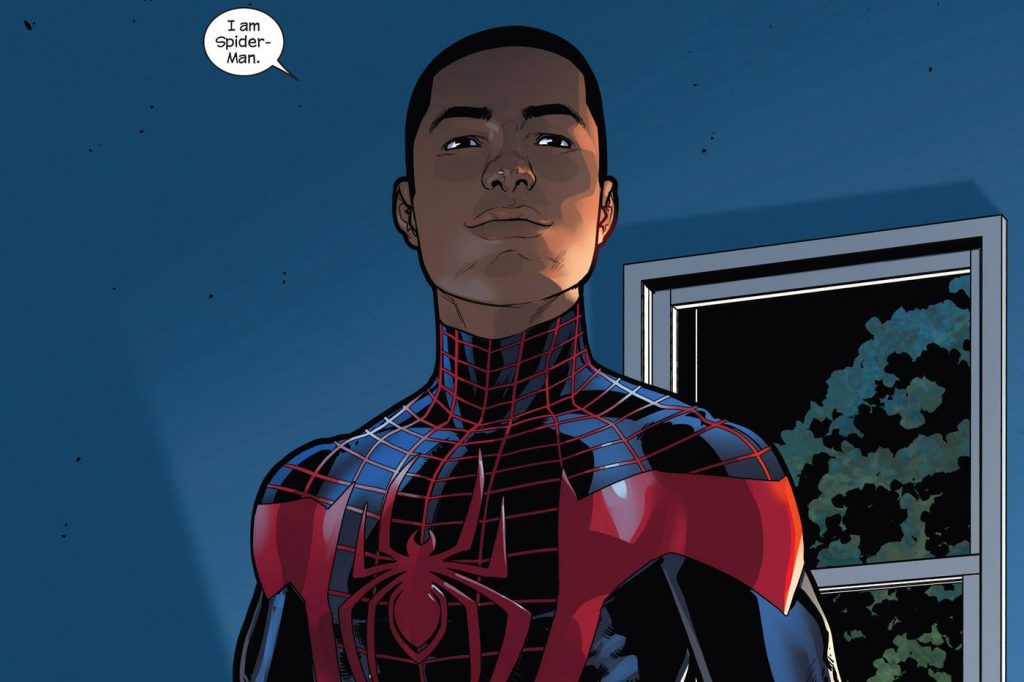 Miles Morales is a lot like Wally West. While he isn’t the first Spider-Man, many comic book fans consider him to be the best. Created by DC’s newest writer Brian Michael Bendis and artist Sara Pichelli in just 2011, Morales has already become a household name to many comic book fans. Considering the fact that comic book pages aren’t always as diverse as they seem, the Hispanic and Black Spider-Man was a welcome superhero to the Marvel line-up.

So, what would be the best way to test this new Spider-Man with audiences? Put him in an animated film! It’s not that Sony doesn’t want to reveal how their Universes intertwine yet, it’s that they probably don’t know yet. Making Miles Morales the center of a new Spider-Man Universe would be a big risk. So, why not dip your toes in the water by connecting the animated film to the upcoming Venom film?

Fans were already very excited about both films. The idea that they could share a Universe,  and actors/characters, is objectively awesome. But does this mean John Krasinski is the older Peter Parker of the Sony Marvel-Verse?

Probably not. In fact, there’s a chance that Tom Hardy’s casting in the film is nothing but an Easter Egg. The actor could be very enthusiastic about playing the character, in any capacity, and could just be willing to take a pay cut for a fun gig.

But Sony knows that they need to spark a fire under their comic book properties if they want to compete with Marvel Studios. Making Miles Morales’s Spider-Man and Tom Hardy’s Venom the center of their Universe could help them do just that.