More than a few people have wondered if Zack Snyder’s version of Justice League was better than the one released. The new story going around is that he was fired from the job after Warner Bros. saw the first cut around one year ago. That’s probably true. But don’t forget they greenlit screenplays and productions in every step of the process. Zack Snyder and Joss Whedon didn’t make Justice League alone. Since there was a mandate to keep the film under two hours, much was left on the cutting room floor. Or never left the page in the first place.

A website in favor of seeing Snyder’s vision, ForSnyderCut.Org, recently revealed a look into the “what if?” machine.

They were mysteriously sent a storyboard for the film. The storyboard was drawn by Snyder himself featuring none other than Darkseid. 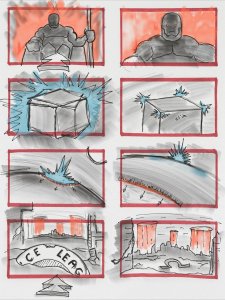 The brief glimpse would have come when Cyborg attaches himself to a piece of Kryptonian technology. Like Batman’s “Knightmare” sequence in Batman v Superman: Dawn of Justice, it would be a sign of what could be. As Cyborg sees Darkseid presiding over the fiery remains of the Hall of Justice. A building that doesn’t exist yet.

The Hall of Justice making an appearance is a little odd. Justice League did feel like a two hour episode of the Superfriends, in a way. But the Hall of Justice in the DCEU?! Doesn’t seem right at all. This Cinematic Universe will already have to answer for the fact that Lois Lane called Superman “Clark” in public. The last thing the Justice League needs now is to have a massive building that says “THIS IS OUR HEADQUARTERS” on it.

But if this sequence was going to be short, why didn’t it end up in the film?

Bad to the Bone

The end credits of Justice League teased a brand new kind of team. Instead of trying to set up another massive, world-destroying villain like Thanos, DC is trying something new. The credits featured famous baddies Lex Luthor and Deathstroke. Played beautifully by Jesse Eisenberg and Joe Manganiello. The two are now the founding members of what we can only assume to be the Legion of Doom. A famous team of supervillains that have been haunting the Justice League for decades.

Rumors have suggested that DC is looking to the Legion of Doom instead of Darkseid to bug the Justice League for the next few years. Suggesting that the team is going to build slow on the fringes of other films in the DC Extended Universe. And that’s exactly what should happen.

New DC Films President Walter Hamada has to differentiate DC from Marvel. After the company failed to replicate their success. To do that, simply give audiences exciting stories in ways they haven’t seen before. While Darkseid will be an exciting villain to see someday, he’s just too similar to another baddie who’s about to wreak havoc on film audiences. Hopefully, the Legion of Doom can villainize the Justice League enough to make up for his absence.