One of Marvel’s newest mutants is a young Indian woman going by the name of Trinary, who is introduced in X-Men Red #2. Her mutant abilities allow her to manipulate technology and she describes herself as a technopath.

When we are first introduced to Trinary, she is portrayed in a sympathetic light as she is being held prisoner by the government of India. In fact, her own father turned her in. But it isn’t until a few pages later where we actually figure out why she was arrested and being held as a prisoner.

In a message to Jean Grey, the new leader of the X-Men Red team which includes Nightcrawler, Namor, Honey Badger, and X-23 Wolverine, Trinary confesses to her crime.

“India has one of the highest gender pay gaps in the world. On average, men are paid 25 percent more than women. Last week every working woman in India was paid 25 percent more. I topped up their accounts…from the accounts of the 25 highest-earning CEOs in the country.” She continues, “There’s no way they could trace it back to me, but…I still think they’re coming. I saw your speech. I saw what happened next. I think I can help you…but I probably need you to help me first. Find me please.” 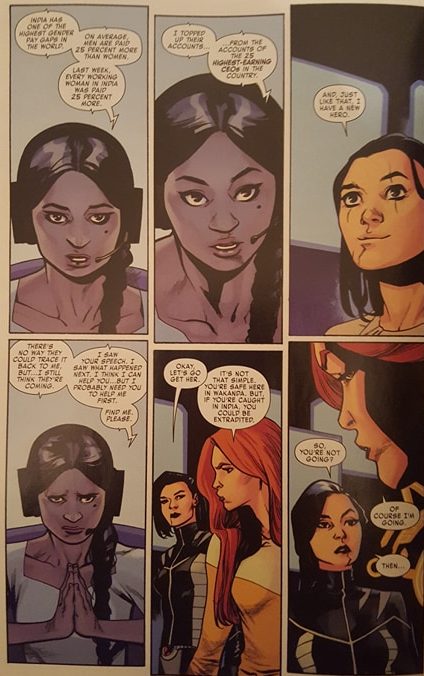 You read that right. The newest X-Men is a confessed super criminal who actively stole other people’s money. She then gives it to others because she believes a certain group of people is victimized. I won’t get into the actual political discussion of this issue because it’s been healthily debunked here in the United States by great minds like Thomas Sowell.

However, I will get into the fact that this isn’t even a good story. This is straight propaganda disguised as a comic book. Writer Tom Taylor even has Honey Badger interject into Trinary’s confession and plea for help by saying, “And, just like that I have a new hero.” No, this person is a criminal. She actively confessed to stealing. What in the world is going on at Marvel where they think people stealing money is righteous and on the side of good? Would Tom Taylor like someone to go through his bank account and steal his money and claim it was for a good cause? I bet he wouldn’t like that one bit. 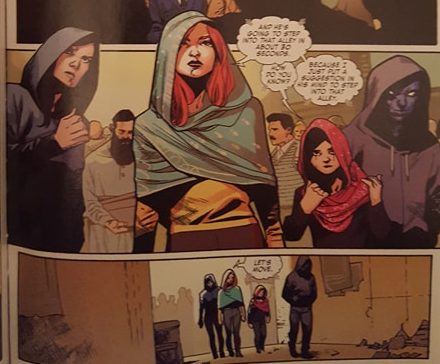 But what’s even worse is that Jean Grey decides to go free this criminal mutant. What does this make Jean Grey? That’s right, she’s now a criminal too because she’s breaking a supervillain out of prison. In fact, she even kidnaps Lakshay Singh, the Head of India’s Mutant Defense Force, in order to locate Trinary. Not only is she breaking out a guilty criminal from prison, but she’s also kidnapping people now. What in the world is going on here?

And the entire X-Men Red team just goes along with the plan. There isn’t even a moral conscious present. It’s just infuriating. You literally have Nightcrawler on the team. Last I checked Nightcrawler is a devout Catholic. He believes in the Ten Commandments. One of those Commandments plainly reads, “You shall not steal.” Does he even say anything? No. The only thing he says is, “Agreed. We’ll handle the extraction.” That’s when they actually arrive at the Indian compound where Trinary is being held.

Tom Taylor and artist Mahmud Asrar have literally turned the X-Men upside down. They are no longer heroes, but villains to be detested. Marvel has made a major misstep here by glorifying criminal activity. It’s also another example of hamfisted politics in comic books that just ruins the story. I expect this book to tank in sales quite quickly.