Beware of Spoilers to Doomsday Clock #4, ye who enter here

In case you didn’t know, writer Geoff Johns and artist Gary Frank are currently telling a pseudo-sequel to the Watchmen story in Doomsday Clock. The story ties into DC’s most recent Universal shake-up, Rebirth, and is bridging the Watchmen characters with the regular DC Universe. Obviously, this means they’re making some changes to the story. One such change, was the “resurrection” of Rorschach. The original Rorschach was murdered at the end of the original Watchmen story. So just who is this guy?

Throughout Doomsday Clock, Johns has been planting clues about the story. First, that he had suffered greatly thanks to the destruction caused by Veidt’s creature. Nightmarish images of the creature landing in New York accompanied this gruesome backstory. But it isn’t quite that simple.

Just who is Mal? As many fans expected, the new Rorschach is named Reggie. Reggie Long. A common last name, to say the least. But one that should be familiar to anyone who’s well-versed in the Watchmen story. Because one of the most important characters in the dissection of Walter Kovacs was a Psychologist that was assigned to him after he was arrested.

The chemistry and scenes between the Psychologist and Kovacs became some of the most important parts of the graphic novel. It helped to cement Rorschach as the true hero of the story. Because despite the fact that he was despicable, he had the most brutal sense of justice. A true sense of justice, born of horror. The tales he tells the Psychologist inspire the same feelings that Rorschach has. It makes the character even more sympathetic. 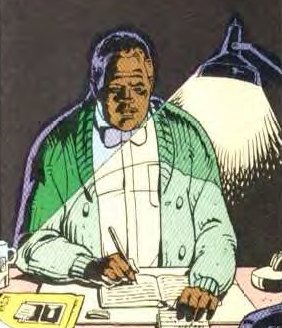 “Kovacs would have saved my Dad’s career. Mom said so.”

The words of Reggie’s inner-monologue say it all. As any Watchmen reader knows, Dr. Malcolm Long was onto something with his research. Rorschach was a difficult subject to understand, but after he dug through the muck of his personality he found the kernel of infinite justice. The cause of all of this vigilantism being a small sense of justice. That was solidified by the discovery of a child murderer. It was one of, if not the darkest scene in comics. Ever.

A new Vigilante is born

After hearing that story, Long starts to understand. Starts to realize just why the dead look in the eyes of Walter Kovacs was so cold. So deadly. Because the world is deadly and awful. And sometimes you need to cut off the bad parts with a sharp knife. That’s what Rorschach thought he was doing to society. That’s what Reggie Long thinks he’s doing to society. Because Dr. Long and his wife were killed in the New York incident in the original Watchmen comic. Geoff Johns revealed in previous comics that Reggie had lost his parents, but now readers know just how important he already was to the Watchmen story. Reggie is one of the few people who can understand Rorschach, because that’s exactly what his Dad was trying to do.

Reggie says he spent more time with his Mom. But he lost everything that day Veidt destroyed New York. Unfortunately, he wasn’t able to kill Ozymandias when he finally found him. Instead, he found a dying man who realized the massive mistake he made. And unlike the original Rorschach, Reggie Long has compassion. He must have learned it from his parents.