Blake Northcott is the author of the The Arena Mode trilogy and recently Aspen Comics’ All New Fathom. She also worked as an ambassador at Mark Millar’s Millarworld in 2015. We’ve also reprinted a number of Blake’s incisive takes on the comic book industry! Off the success of All New Fathom, she’s working on a brand new comic book project.

We were lucky enough to be able to chat with her about the project. We also discussed the current happenings within the comic book industry including #MoveTheNeedle.

Bounding Into Comics (BIC): Hey Blake! Thanks for taking the time to chat with us about your upcoming project from Aspen Comics!

Blake Northcott (Blake): No problem! Thanks so much for having me.

BIC: You recently teased a new project at Aspen Comics. What can you tell us about it?

Blake: It’s called Executive Assistant: Iris, and it’s coming out May 23. It’s the 10 year anniversary of the character, and I’m writing the fifth volume.

It’s about a woman who was raised from birth to be an assassin. In my series she’s going freelance, and is questioning her mortality for the first time. As the Aspenverse changes and new threats arise, she’s faced with the fact that, in a world full of gods and monsters, she might need more than just her training to stay alive.

It’s got a John Wick vibe to it, with some Asian cinematic influence, obviously. I lived in Japan and attended school there, and martial arts films were a huge part of my childhood. I also attended sumo events, and watched kickboxing tournaments on TV. That’s always stayed with me, and it’s part of what drew me to this book. 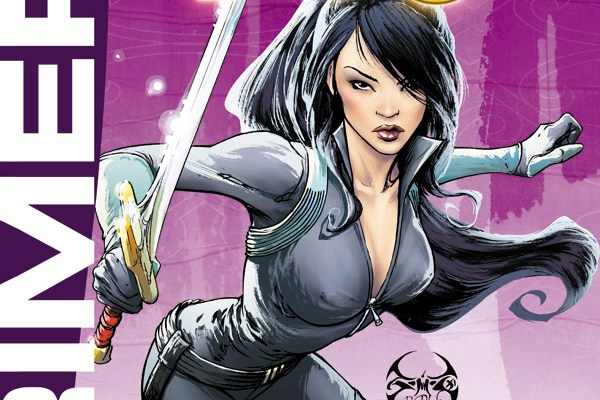 BIC: You’ve got me intrigued about the sumo wrestling – that’s something you don’t normally see in comic books. How exactly will that influence the series?

Blake: You might see a sumo wrestler in there as an Easter egg, but you won’t see one as a main character. Not that sumo wrestlers can’t be main characters. As a huge Street Fighter fan, I don’t think E. Honda ever got his due – he was a bad ass.

If you saw my last run of Fathom there is definitely a martial arts influence from all my years of watching UFC and PRIDE over in Japan. I even had Aspen Matthews use a triangle choke, which was a shout out to all the MMA fans who also read comics.

BIC: Oh man! E. Honda was my go to choice in Street Fighter! What’s it like to take over a character who’s been around for 10 years? How much research do you do on their history?

Blake: Oh, it’s a huge responsibility, but it’s also a juggling act. You have to remain true to the character and retain their personality and traits, but at the same time you have to move them forward and continue their story, whether it’s pushing them through an existing arc, or creating a new one. I wanted to give Iris some new problems in her life, but still had to keep her the same person.

I do a ton of reading of past issues, of course, and re-reading the ones I’ve already read. Aside from that I draw inspiration from a ton of different sources, whether it’s history books, martial arts competitions, Asian cinema, or just people I grew up with.

My best friend who lived down the street was second generation Chinese and her parents were like an aunt and uncle to me – they loved to teach me Chinese words, their traditions, have me over for dinners and holidays – it was such a learning experience. And it gave me a wonderful perspective on someone in Iris’ position: being raised in China, and then coming to North America. If I didn’t feel confident that I could contribute to her character and capture her voice, I wouldn’t have accepted the challenge of writing her. 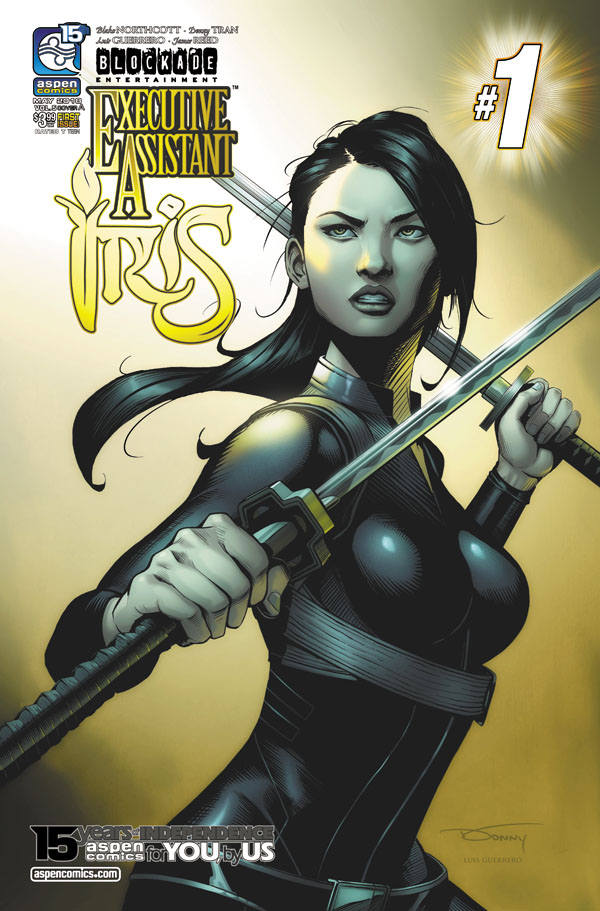 BIC: The comic book marketplace has gotten quite crowded over the past few years. There’s more competition than ever. But with that increased competition there’s also been a decline in print sales. What makes this new project stand out from everything else?

Blake: Executive Assistant: Iris stands out because it’s a throwback to the comics of the 90s. It’s sexy and fun and dangerous in a way that most modern comics are afraid to be, and I think that will intrigue readers. And the art is absolutely gorgeous! You’ll have to read the first couple issues and let me know what you think.

BIC: You recently completed your eight issue arc of All New Fathom will we see more in the future?

Blake: I hope so, but not in 2018. I’m working on Executive Assistant: Iris and No World with Scott Lobell this year, and the new volume of Fathom will be helmed by Ron Marz. Maybe in 2019? You never know! 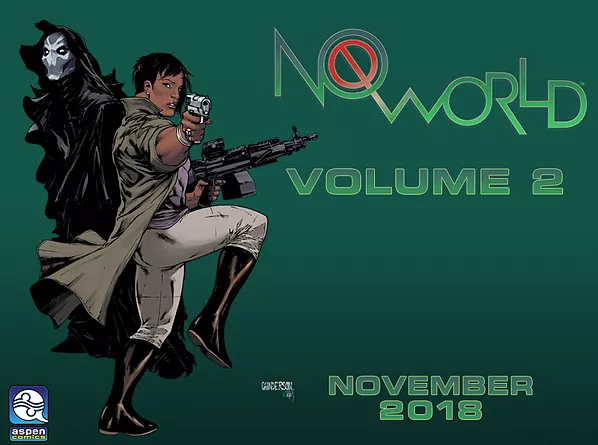 BIC: What other projects are you working on? Will we see more novels in the future?

Blake: Absolutely! I just finished a magic realism novel that is a cross between The Craft and James Bond. It introduced magic to unsuspecting teens, but there is a spy thriller element as a government agency tracks them down.

Yes, it’s as weird as it sounds, but I think fans of my past work are going to love it. No release date yet, but I’ll keep you posted!

BIC: Print sales have seen a significant decline over the past year, but comic book movies are dominating the box office. Where do you see the disconnect between movie audiences and comic book readers?

Blake: If there’s a disconnect it’s that first and foremost, the movies focus on fun.

There’s action and adventure, and a sense of wonder that used to be very prevalent in comic books, but in comics the adventure has been pushed to the side a little bit in recent years, giving way to a more political slant.

I connect with literally thousands of comic book readers a year on social media, Email and at conventions—the one common thread I hear day in and day out: less politics, more fun.

I can’t help but think that’s the disconnect between the mediums.

BIC: What do you think comic book publishers can do to bridge this disconnect and get more people reading their comics?

Blake: Listen to fans. They’re the ones paying for the books, and the customer is always right. If they want more fun and less politics, then give it to them. 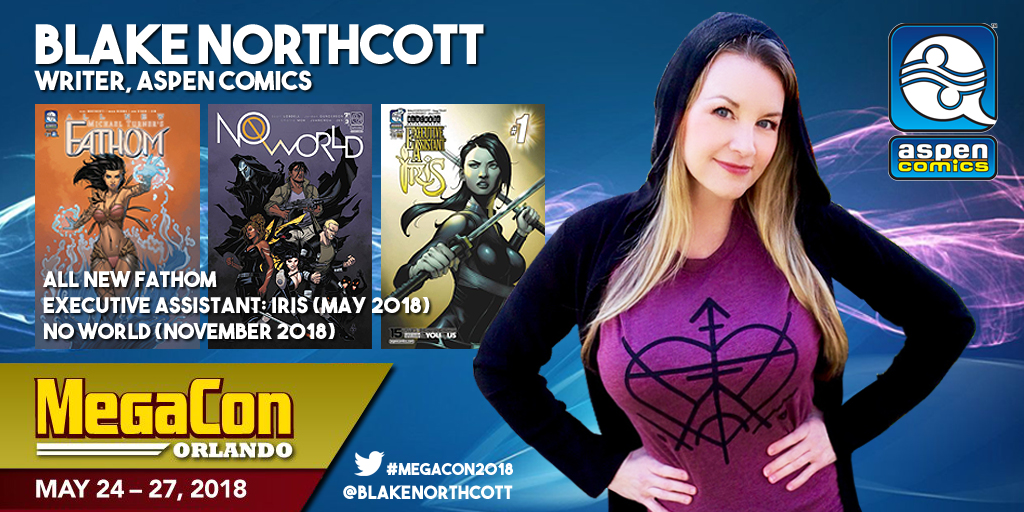 BIC: There’s been a recent push for a lot of fans to post pictures of the comics they are buying. You’ve even used the #MoveTheNeedle. What’s your take on this movement?

The best thing about #MoveTheNeedle is that it’s a bipartisan, fan-created, grassroots movement. It has no political leaning—you buy a comic, post a photo of it, and include the hashtag. Simple.

I’ve been posting about comics for 8 years now, and it always gives me a buzz of excitement when someone says they bought Saga, or Batman: White Knight, or Chew or any of my other favorites because of my recommendation.

#MoveTheNeedle is basically the same thing, and I’m thrilled it’s taking off.

Troubles in the Comic Book Industry

BIC: There’s been discussion over the past few years about a lot of publishers and comic book writers injecting their own personal politics into their stories. How do you think as a writer this should be handled? Should writers and creators shy away from controversial political topics?

Blake: Every writer has a perspective on the world around them, and their work will always reflect their beliefs to some degree. But the question is, how much is too much? And how partisan can a comic get before readers start walking away?

Entertainment, like comics, used to be called ‘escapism’. In small doses, political and social messages are fine—and when they’re done well, they can be great—but I feel like there’s a fine line between weaving a message organically into a narrative and lecturing your readers.

Don’t get me wrong, some fans love this; they want to be immersed in political discussion constantly, even in their comic books. But as I mentioned before, the customers—at least the ones I’m regularly hearing from—are asking for less politicizing, and I think editors are starting to hear them, too.

At the end of the day, comics shouldn’t divide fans along political lines. They should bring us together. 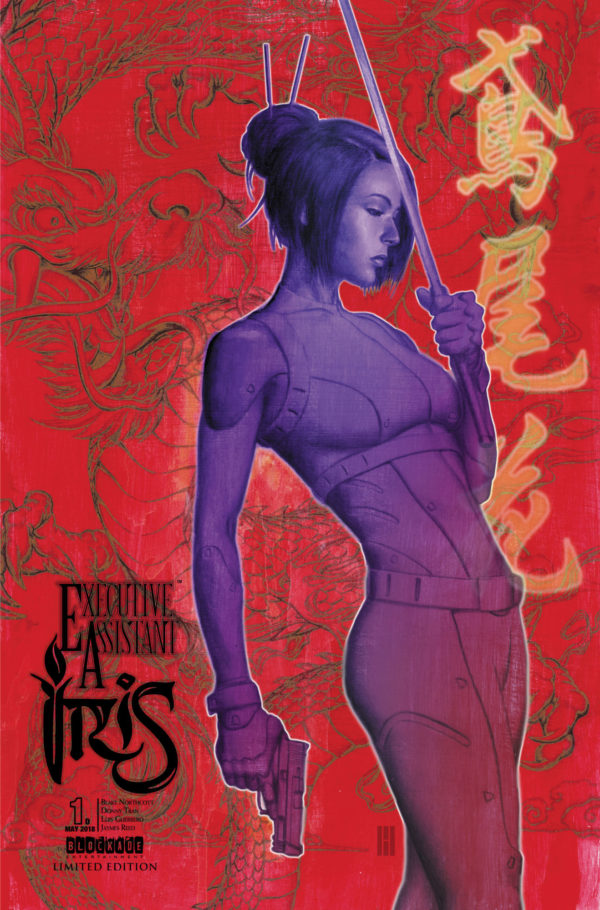 BIC: A number of creators are also isolating themselves from fans with block chains on Twitter. The block chain created a reaction where fans began circulating a blacklist. What do you make of all of this?

Blake: It’s crazy! I just recently learned about these block chains. I’ve gone to fellow creator’s Twitter pages, only to find out that I’m blocked—and I don’t even know them! It’s a strange phenomenon.

Personally, I encounter a couple idiots a year that require individual blocking, but I’ve never felt the need to mass block thousands of fans. Places like Twitter have a bad reputation for trolls, but only a fraction of users are bad apples.

Just be cool, and people are cool in return. I chat with people I disagree with politically all the time, and they’re very kind and respectful to me. The golden rule applies online as well as in real life from what I’ve experienced.

I think these creators are banning a ton of potential fans just to spite a handful of trolls, but that’s their prerogative. It’s a personal choice, and I’m not judging. If someone feels their online experience is more pleasant with these blockers in place, that’s cool, too.

Blake: It’s easier than ever to self-publish, and that’s a great way to avoid the gatekeepers. If you have an idea that’s a little outside the box, just Kickstart it, or publish on Amazon, or go another route. There are infinite possibilities.

As far as established companies go, I think trades will continue to be big. Collector items to put on your shelf will always be popular as long as book shelves exist. Digital will continue to grow as well.

And I think the industry will also continue to be the best and most reliable incubator for TV and film. 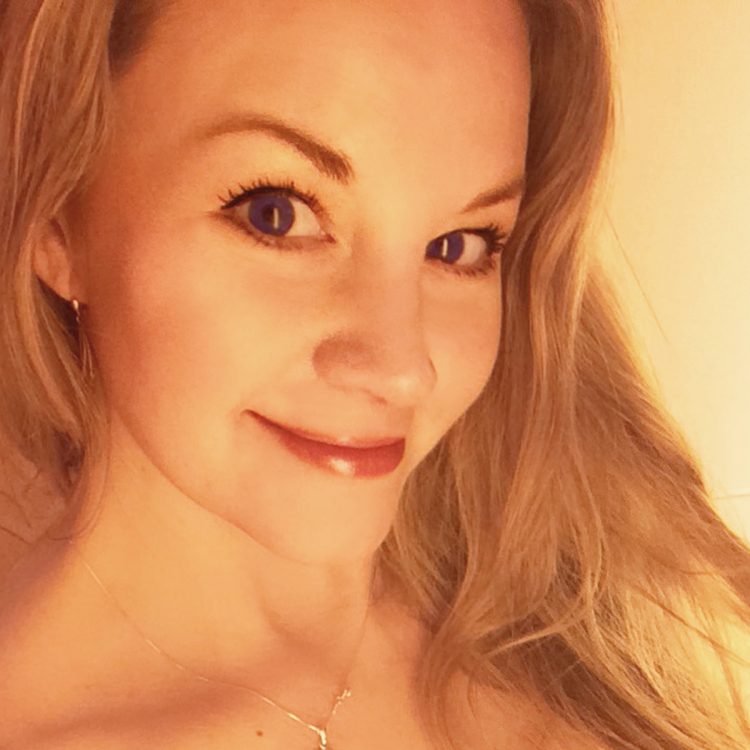 BIC: If you could write any character that you didn’t create, who would it be?

Blake: Dazzler or Harley Quinn. Poison Ivy is a favorite, too. But Booster Gold is at the top of my list! I think he might be the most underused character in all of comics—DC is sitting on a goldmine, pun intended.

BIC: Who are you going to cosplay for Halloween this year?

Blake: My cosplaying years are behind me! I dress up every year for Halloween just for fun, but I don’t consider it ‘cosplay’, per se. I leave that to the experts.

I haven’t even thought about it! Buzz me in October and I might have a sneak peek for you.

BIC: How can folks keep up to date with everything you have going on?

Blake: My website has links to all my social media, and everything I’m up to. http://www.blakenorthcott.com

BIC: Thanks again Blake for taking the time to chat with me!

Blake: Anytime! Thanks for the opportunity!