“The world’s faith in its Spandex Society is falling apart.”

Heroes haven’t always been the heroes of the Watchmen story. Metahumans cause quite a few problems, after all. Mass destruction and death, calamitous fights and wars. Horrible consequences caused by those that claim to save us. Well, at least some of them do. Geoff Johns continues the deconstruction of the superhero in the pages of Doomsday Clock #5. Completely following up on the original themes of the Alan Moore comic from which the character’s originate. The search for Dr. Manhattan continues. As Moore’s character are introduced to the normal DC Universe, some clashes occur. There’s bound to be some…redundancies. Can’t have that many murderous clowns running around, can you?

Doomsday Clock #5 may be the most lighthearted issues of the series so far despite being the most violent. The world is being torn asunder as Adrian Veidt’s mission is spilling over into a mess of DC characters. The Joker is just one of DC’s greats to make an appearance. 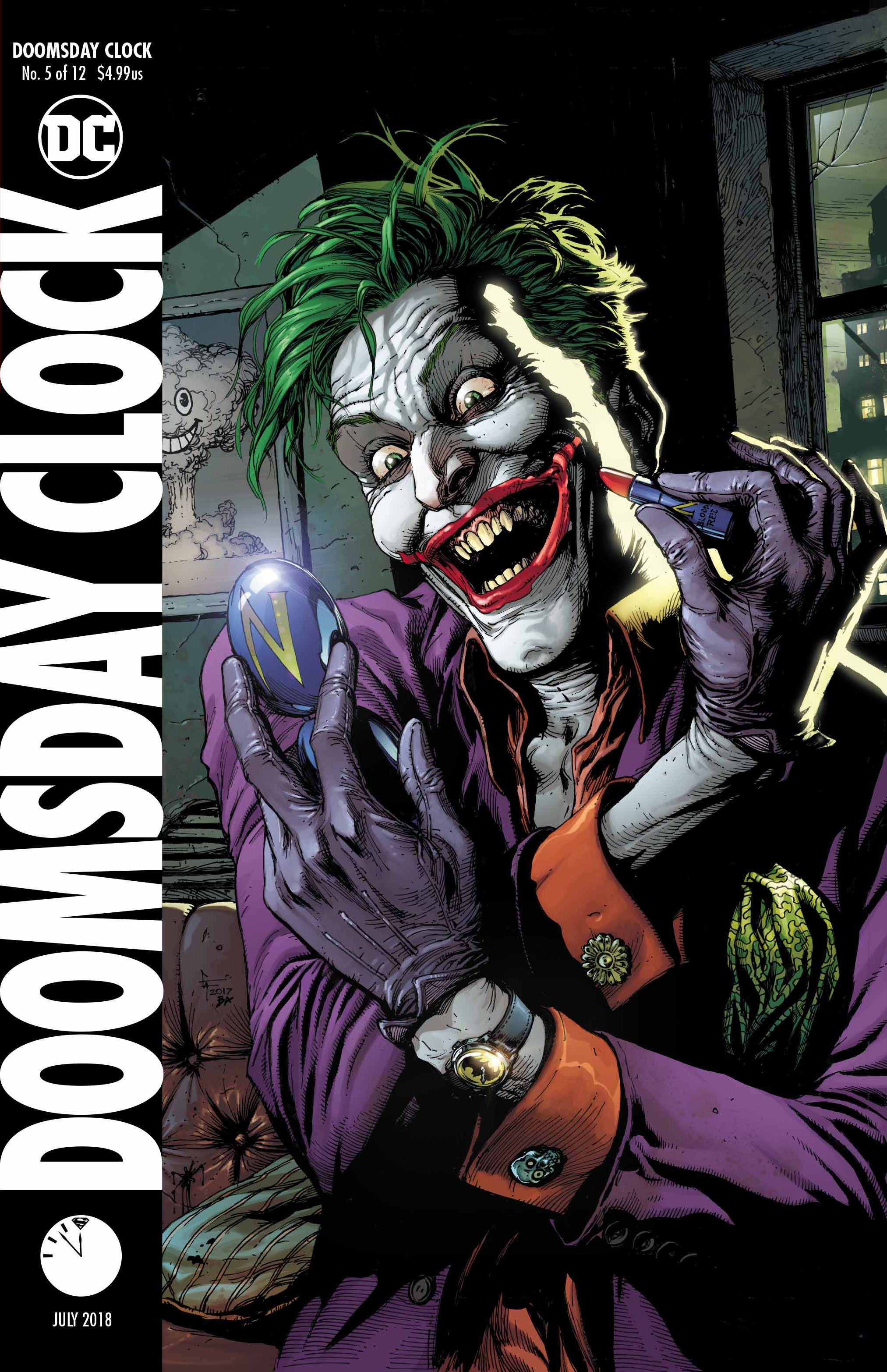 Johns is the quintessential DC writer right now. The most versed and talented at bridging these ridiculously out-of-sink worlds together into a cohesive story. In that, Doomsday Clock could be his masterpiece. He was tasked at making some of the most important characters in comics somehow work with some of the other most important characters in comics. Solving the disappearance of the most powerful man in DC fiction. The hunt is on for Dr. Manhattan, and it’s one helluva show so far.

“The People’s Heroes Are Capable of Destroying Any One of America’s Manufactured Metahumans.”

Russia and America are at it again. No, this isn’t some meta-commentary on real world politics. Or is it? The Cold War was an interesting backdrop for the tense events of Watchmen. It created the necessary fear and uneasiness in the reader that it held on the characters within the story. Not difficult to imagine, considering how many times the world has been on the brink of another war. That’s the anger and unease just under the surface of Doomsday Clock #5. As Geoff Johns continues to build his story, the elements only get more interesting. Rorschach was interesting as an unknown, but now he has a purpose.

Ozymandias, Adrian Veidt, always made for a cool and calculated villain. But watching him unravel under the weight of his own mortality is captivating. Johns is obviously exercising his own designs over these characters. Famously, the original Watchmen characters were created because the story was seen as too mature to star the regular DC characters. Thus, Alan Moore was able to fully realize his own story by creating stand-ins for a number of DC Comics and Charlton Comics characters. 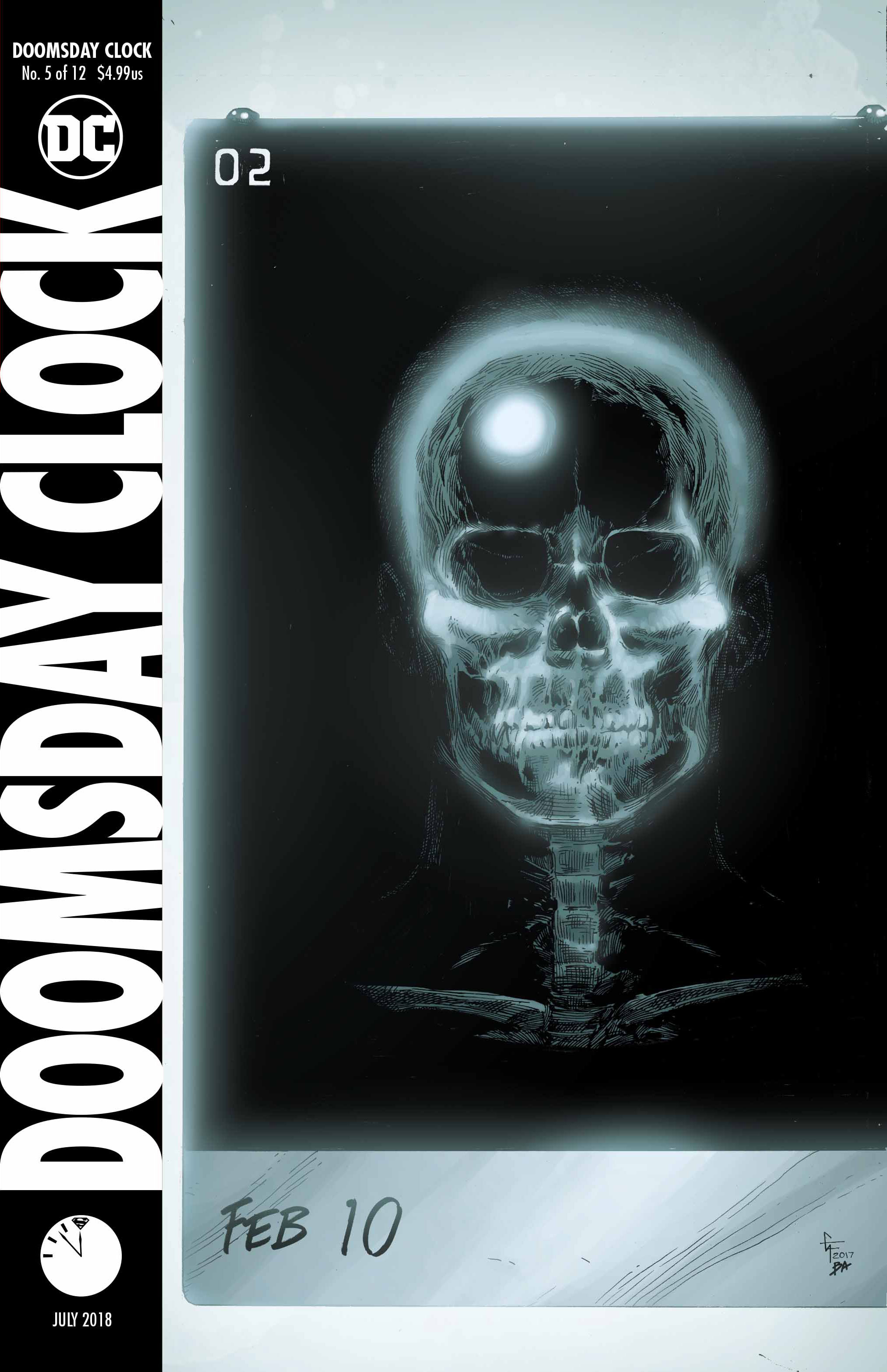 As Veidt’s own death becomes closer, his frustration and hubris is showing. Batman and Luthor have always had a great chemistry. Arguably, the two most clever and intelligent men on the planet unless Mr. Terrific is within earshot. But here it’s Veidt who has Batman’s attention. A clever way to get these clever thinkers together. Yet not all works as planned. Johns’ Batman has always been flawed and imperfect. The pickle he’s landed himself in at the end of Doomsday Clock #5 is one of the most dangerous and interesting of the character’s history. Only Geoff Johns could make such a cruel fate so exciting for the Caped Crusader and this bevy of amazing characters.

Gary Frank is simply one of the best. In terms of comic art, his style could be regarded as classical. While the 80’s and 90’s created whimsy, fantasy, and massive action Frank has remained in the past. His work perfectly depicts heroes as they would be, villains as they would be. Small men in costumes. Large piles of fabric stretched over surprisingly small frames. It helps to showcase the story and not the characters. A perfect way to mirror the work of Dave Gibbons, the artist of the original Watchmen comic. His was a world with no embellishments. With costumes as weird as their concepts. Making characters such as Ozymandias look as ridiculous as they should be.

Frank builds on that vulnerability and then some. Even Superman doesn’t resemble his muscled, chiseled self. It’s a down-to-Earth look that makes Gods and Men look the same. Another perfect way for the retired heroes and villains of both the Watchmen and DC worlds to look even more pitiful. That was one of the most fascinating part’s of Moore’s original work. The fact that he so clearly didn’t love superheroes. Having no fondness for them, he painted them with a much sadder and bleaker brush.

Writer Geoff Johns, artist Gary Frank, and colorist Brad Anderson do more than just replicate. The collective team builds on the sad message of the original by introducing them to the more exciting and glowing world of the DC Universe. A promise that when guided by the right light or lantern, real heroes and villains can exist.

Where is Dr. Manhattan? At first, that thought only concerned a couple of antiquated characters making their way from one Universe to another. Now the entire fate of the DC Universe and its people lies in that question. Doomsday Clock #5 isn’t just an amazing comic, it’s the continuation of a new DC classic. The epic story involved is just as mysterious as most of the players, even though it all revolves around that simple question.

Adrian Veidt just won’t stay down. Despite the fact that he’s taken quite the beating across multiple Universes. As he and Rorschach are the closest things the reader has to a protagonist, it’s both exhilarating and daunting. Johns turned one of the most unsympathetic and unrelatable characters from Watchmen and turned him into a fractured, vulnerable main character. Only a true master of comic writing could make such a turn. The rest of the twists and turns implemented in Doomsday Clock #5 are just as promising, an invitation to continue down Watchmen’s deconstruction of the superhero to the deconstruction of the entire DC Universe.

That’s what makes everything about the Doomsday Clock idea so alluring. A sequel to Watchmen seemed so wrong, but Geoff Johns and Gary Frank seem to be doing everything right.