This last week we’ve seen creators go after fans for a number of perceived offenses. Most will point to what they’re calling “targeted harassment” or trolling online. On the other side, fans are claiming to be sick of creators not listening to their views and how the work they do has negatively affected their fandoms.

We are seeing this play out in the Star Wars fandom after Kelly Marie Tran deleted all of her Instagram posts and apparently left social media. As of right now, the Star Wars actress has yet to go public with her reasoning. But it hasn’t stopped multiple outlets from channeling their inner fury to target fans who don’t walk the expected Social Justice Warrior line.

But Star Wars isn’t the only fandom where this is happening. EA and Dice joined in on the action following the release of their Battlefield V trailer.

As you can see above, the trailer depicts a British woman with a prosthetic fighting on the frontlines during World War II. Fans and customers took exception to the historical inaccuracy and have roundly downvoted the trailer on YouTube. As of this writing it has over 414 thousand downvotes compared to 320 thousand upvotes.

But fans would also vent their frustration on Twitter with the #NotMyBattlefield Hashtag.

Tomb Raider, Horizon, Resident Evil are all games with females protagonists that we love. However to have female soldiers on the front line in a ww2 setting wearing make-up and saying hello old friend? Can’t we have a game without this liberal mumbo jumbo. #NotMyBattlefield

It’s true. Over the last twenty plus years, I’ve played games. I’ve seen multiple titles not only do well but excel portraying women as alpha type heroes. Samus Aran was by far my earliest memory of a strong female hero. Though us players didn’t find out that the person under the helmet was a female till the end of the game. But that didn’t stop us from enjoying the game.

I don’t remember gamers throwing a fit upon the realization that Samus was a she. Of course, Samus isn’t a unicorn. There are multiple other female leads over the last thirty years that have done well and continue to do so.

Mentioned above, of course, are some. But I’d like to also point at Rayne, Morrigan Aensland, Kitana, among others.

Imagine talking to your grandpa about WW2 and it’s like this-
“Grandpa? Who did you fight with In the war?”
(Grandpa laughed and leaned back in his rocking chair)
“Well junior… it was me. Jason. Bill. Kieran. And this woman without an arm.”#NotMyBattlefield pic.twitter.com/e49xbTfli2 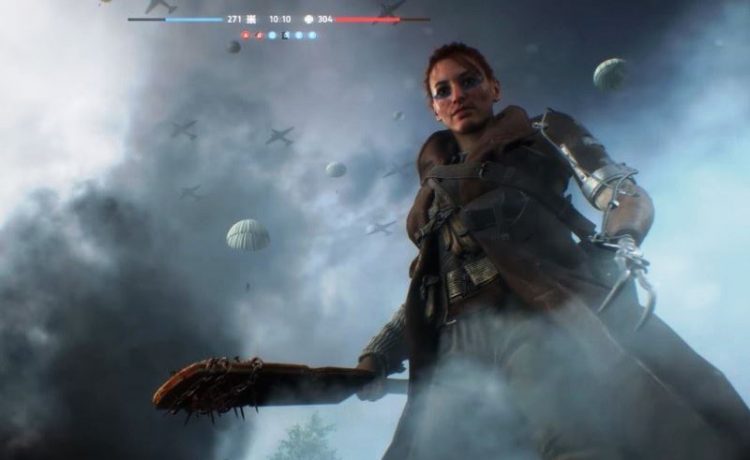 These next set of tweets make an interesting point. And maybe the problem lays with how EA and Dice sold the game to fans. Though of course, we know that Battlefield, Call of Duty, and other games of the sort, aren’t meant to be vividly historically accurate. But there is an implied expectation that there will be a minimal level of realism.

#NotMyBattlefield I really would like to discuss with anyone that thinks we stand for woman hate and not against a product that destroys a part of history. i am well aware of the existence of woman in minor areas like russia (mostly snipers and a propaganda devision) and

Can’t wait to play as a black female soldier fighting waves upon waves of katana-wielding samauri nazis that look like they are from a post-apocalyptic world while being friends with a medieval British woman who has a prosthetic arm!!!! #NotMyBattlefield

#NotMyBattlefield If they had women in accurate roles like the French Resistance, WACS, WAVES, etc there wouldnt be backlash! History is what happened, not what you wish happened if the event was in 2018! But these dopes think men are women are men because of words and wishes!

That is part of the reason people love these types of games. It’s an opportunity to experience an historical event via a gaming platform. But it’s not only that for many of us. It’s respect.

If you want to really tell the story about women in World War II then why not center the game around the French Resistance? Or Soviet Snipers? You don’t have to brush off real-life accomplishments and work just to make the game more “inclusive.”

But, are the fans just mad because of this issue? Or is EA trying to cover up their own shortfalls in the gameplay?

Seeing gameplay of bf5 was disappointing. I was excited because @jackfrags got me hyped with his good vids. But then gameplay came and it looks like call of duty arcade shooter. battlefield, you gotta stop saying your “realistic” after this game. #BattlefieldV #notmybattlefield

Ι am not buying this, i want an experience that feels authentic! not fortnite in a ww2 setting… crazy customization doesn’t belong to a serious and gritty world war 2 game #NotMyBattlefield

Its so disappointing, the game play for BFV is so good but the bad customization will kill the game and experience #NotMyBattlefield

Though as you go down through the hashtag. You also see plenty of other gamers disappointed with the gameplay of Battlefield V. From the customization to some exploits as well as the feeling of it that allows you to jump out of a jet and fire on people. It seems that the negative feedback around the game isn’t as singular an issue as Ben Kuchera of Polygon would lead you to believe.

“On the [women] in Battlefield, this is something that the development team pushed. Battlefield V is a lot about the unseen, the untold, the unplayed. The common perception is that there were no women in World War II. There were a ton of women who both fought in World War II and partook in the war.”

He is correct. Hundreds of thousands of women took part in both sides of the war. But that isn’t the issue, Soderlund admits what the real motivation behind their creative decision for the game was:

“We felt like in today’s world—I have a 13-year-old daughter that when the trailer came out and she saw all the flak, she asked me, ‘Dad, why’s this happening? She plays Fortnite, and says, ‘I can be a girl in Fortnite. Why are people so upset about this?’ She looked at me and she couldn’t understand it. And I’m like, ok, as a parent, how the hell am I gonna respond to this, and I just said, ‘You know what? You’re right. This is not okay.'”

Um, the same way I do with my own daughter. Show her the history behind the content and allow her to…play the game. Sometimes as parents we just cannot sugar coat the truth. At an early age, I had to explain to her that the US military still used segregation on its own troops during the war.

That means that if she and her cousins had lived in that time and were conscripted, they would be in segregated units. It’s not an easy lesson, but we just cannot whitewash history.

Then Soderlund decided to not only disregard fan concern but to disrespect, the very people whose patronage he and his company depend on.

“These are people who are uneducated—they don’t understand that this is a plausible scenario, and listen: this is a game. And today gaming is gender-diverse, like it hasn’t been before. There are a lot of female people who want to play, and male players who want to play as a badass [woman]. “

His mountain must be so high. No, most of us aren’t “uneducated” and the excuse of a plausible scenario as an attempt to cover up a screw up is cowardly. It’s also plausible aliens took part in the war too. But it does not mean I want to pilot a flying saucer during the Battle of the Bulge.

He concluded by telling fans if they don’t like it to not buy the game.

“And we don’t take any flak. We stand up for the cause, because I think those people who don’t understand it, well, you have two choices: either accept it or don’t buy the game. I’m fine with either or. It’s just not ok.”

And I agree, we don’t have to buy it. That is true. But EA shouldn’t be counting its eggs just yet, since it’s massive PR debacle last year with Star Wars Battlefront II. 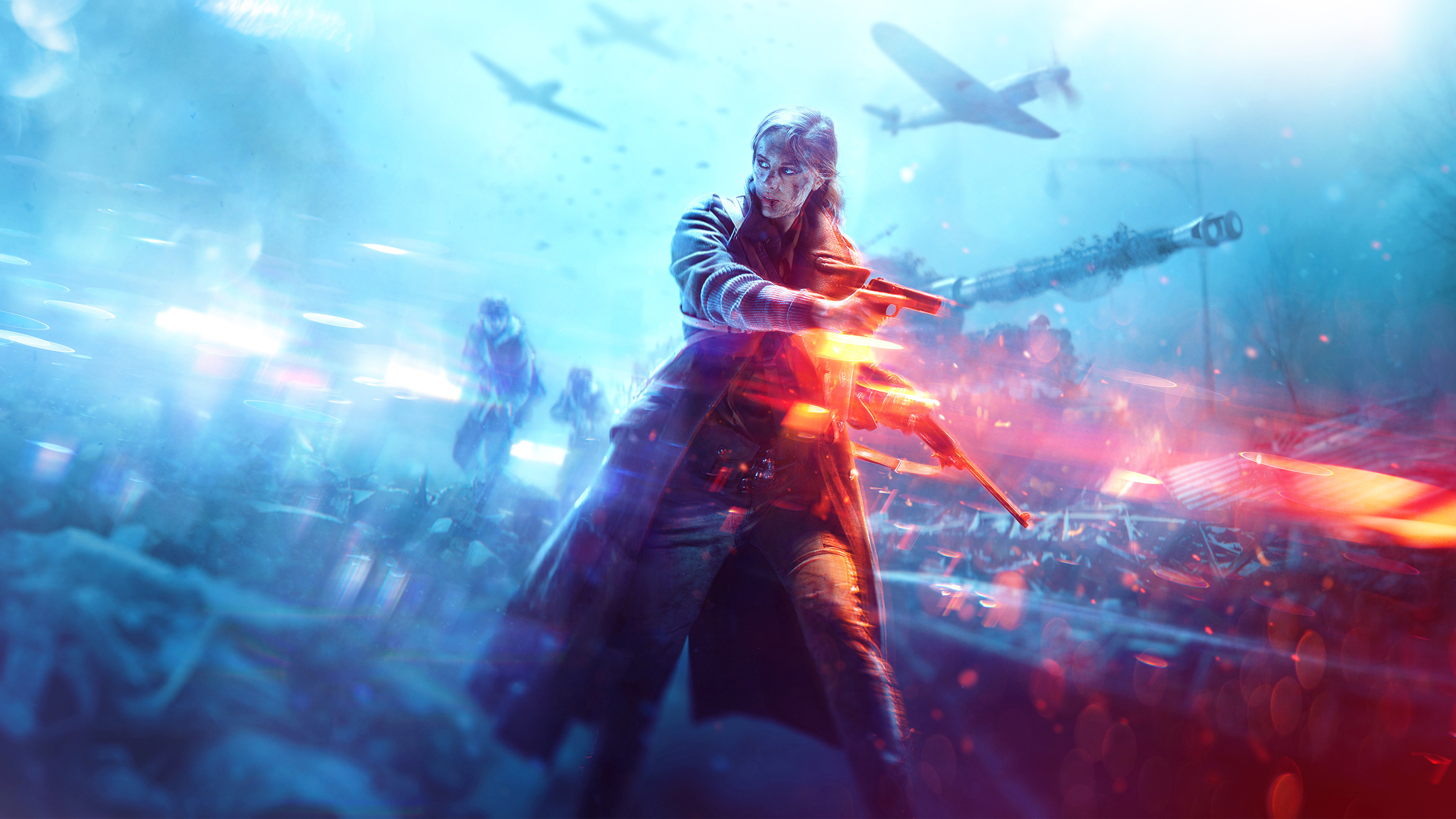 Soderland wouldn’t be alone in his defense of the game’s decision. DICE’s Design Director Alan Kertz issued his own statement on the matter.

I knew this was going to be a fight when i pushed for female soldiers in Battlefield. I have a daughter, and I don’t want to ever have to answer her question of “why can’t I make a character that looks like me” with “because you’re a girl.”

I fundamentally feel to my core this is the right way and I will find myself on the right side of history.

And I think many people will play the game despite their reservations. And maybe learn something about either history or themselves. That is part of the making games art.

I can’t speak for that timing, I know personally that I wasn’t in a position of enough influence to make it happen. I also know a lot in society has changed and for me personally I grew up a bit and looked at the world with new eyes. From within the industry we’ve seen so much male domination, for whatever reasons, and I work for a studio and a company that recognizes the value of diversity in what we do as game makers. That’s been a big deal for me also.

Sometimes just enough things come together to make it happen. It felt like an inevitability. The excuses were running out and the support was there… so it happens now.

With EA doubling down against fans, and the audacity of their Chief Creative Officer Patrick Soderlund to call unhappy fans “uneducated” it looks like there is a troubled road ahead for EA and the video game industry at large.

In the end, they depend on the average player who just wants a good game. That’s not asking for a lot, but to go out on a limb and disrespect gamers because their “creative” decisions are questioned is a new level of arrogance from a company that is about as loved as Comcast.

Former Team Lead for Vanilla World of Warcraft, Mark Kern, was able to express what everyone is feeling in two tweets.

I have no problem adding women and facepaint to your WWII themed game.

Just stop pretending its because it’s more historically accurate and attacking your fans for it.

They aren’t being mysoginistic, they just wanted that WWII feel.

It seems like every time a game company gets critiqued for a bad design or marketplace decision, its not the “goto” method to blame your customers and call them horrible names.

How is this good business sense? It’s never worked before for Ghostbusters, etc.

Will gaming pros and companies continue to bite the hands that feed them?