Kemp has written a number of Star Wars novels including Lords of the Sith, Star Wars: The Old Republic – Deceived, Crosscurrent, Riptide, and more.

Over the weekend, Kemp decided to attack certain Star Wars fans calling them “detestable human being[s]” if they use the terms “forced diversity, SJW, or politically correct, or whatnot.”

There are probably some followers of this feed who use the term “forced diversity,” “SJW,” or “politically correct,” or whatnot.

If you’re one of them, unfollow me. I don’t merely disagree with you; I find you contemptible, a detestable human being with whom

He would go on to say he doesn’t even want indirect contact with people who use the terms and told those who do to “run back to your fellow neckbeards/incels or whoever it is you hang out with. Just stay of clear of me.”

And if that wasn’t enough he decided to curse these fans out. 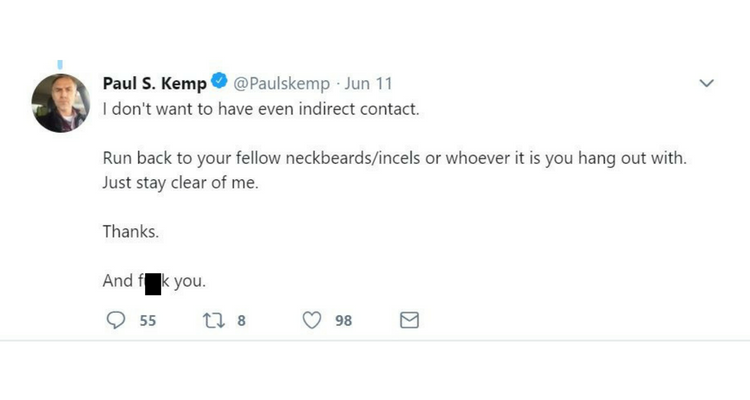 It appears Kemp decided to attack Star Wars fans after learning that actress Kelly Marie Tran, who plays Rose Tico in The Last Jedi, deleted all of her Instagram posts. It also comes on the heels of the financial failure of Solo: A Star Wars Story. The film has currently grossed over $300 million worldwide, but as Hannah Shaw-Williams at ScreenRant explains “in order to break even a movie needs to gross double its production budget at the box office.” Solo’s production budget is estimated at more than $250 million which means it would need to gross $500 million to get there.

Industry analyst Eric Handler adds the film is “a financial disappointment and you have to wonder, is this just a speed bump in the road for the ‘Star Wars’ brand, or is there something more here?”

It’s mystifying why Kemp would decide to attack fans and consumers of Star Wars products when their big summer blockbuster is absolutely bombing. Wouldn’t it make more sense to try and get those fans to go see Solo instead of berating them over their criticisms of the film?

As more and more Star Wars creators come out and attack fans, I can’t see the upside for Lucasfilm and Disney as fans will continue to turn away from the brand. It doesn’t look good at all.