Here are eight of Frank Castle’s most gruesome kills ever. This list isn’t for those with a weak stomach!

In the pages of Punisher Max #6, Frank Castle has perched himself on top of a high rise and picking off wise guys and mafia members left and right. However, one of them gets through and is able to incapacitate his partner, Micro. Frank confronts the wise guy and the two go at each other like rabid dogs exchanging blows left and right. The wise guy even pulls out a knife and begins stabbing Castle. However, Frank won’t be deterred. He lifts the criminal onto his back and chucks him out a window onto a spike fence below. Frank then jumps down and lands right on top of him. 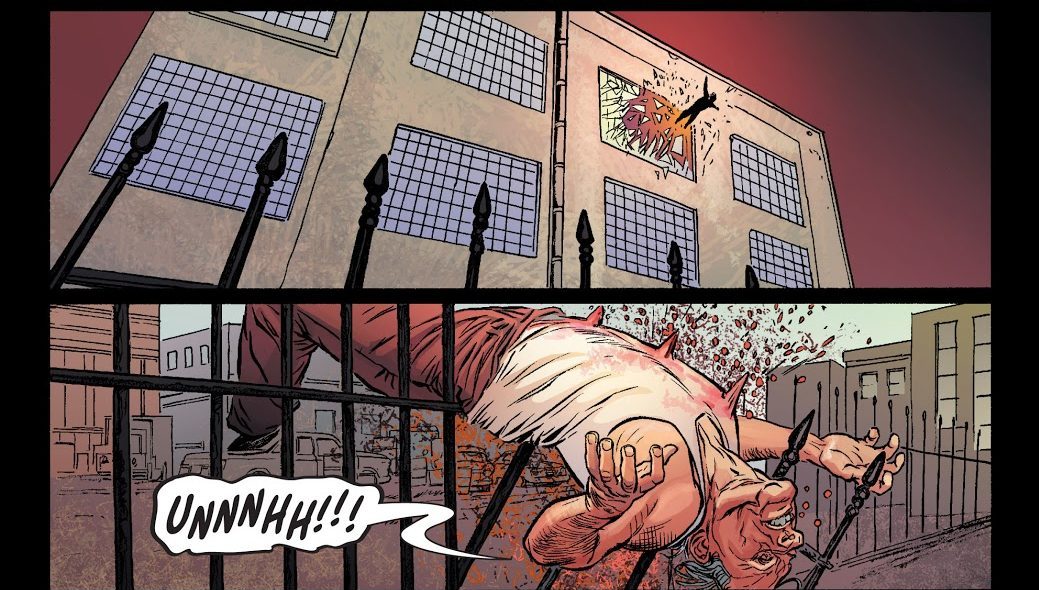 You’d think that would kill him. But somehow he survives and attempts to sneak up on Castle from behind. Castle hears him. Turns around and blows him away with point blank shotgun blast right to his temple. 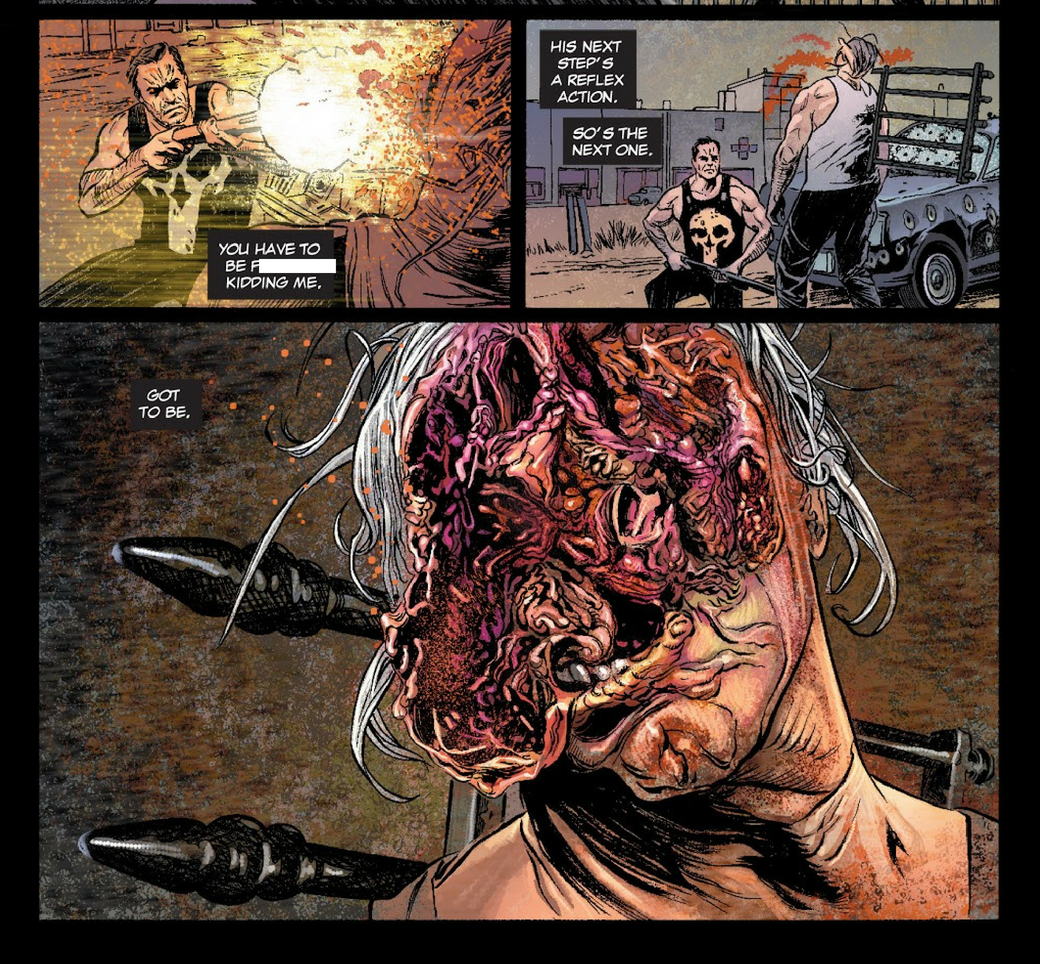 We continue with the pages of Punisher Max and in issue number 24, Frank Castle puts Italian mafioso Nicky Cavella out to pasture. Cavella provokes Castle’s anger by digging up the bodies of Frank’s wife and his two kids. But he doesn’t just dig up their bodies. He also takes a leak on them. To make matters worse for Cavella, he videotaped the whole stunt in an attempt to provoke Castle. The ploy nearly works, but Castle gets some help and he’s able to kidnap Nicky Cavella and take him out into the mountains.

Castle then tells Cavella exactly what he is going to do to him. He’s going to to shoot him “low in the stomach.” He tells Cavella, “Your guts’ll fill up with s***. You’ll die of blood poisoning, maybe take a couple of nights to do it. No one’ll hear you, way out here.” 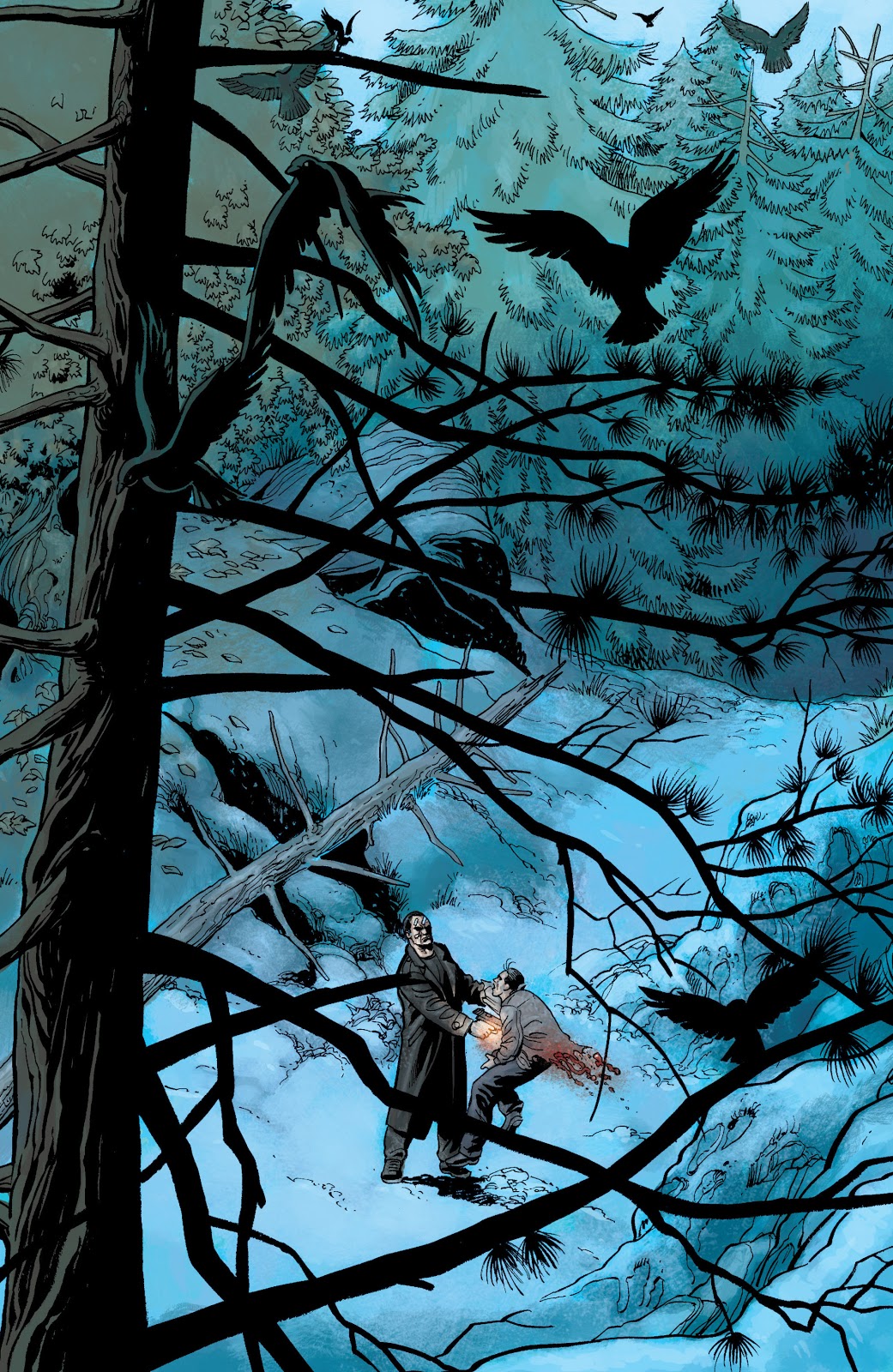 And Frank keeps his promise. He shoot Cavella right in the gut and leaves him for dead. 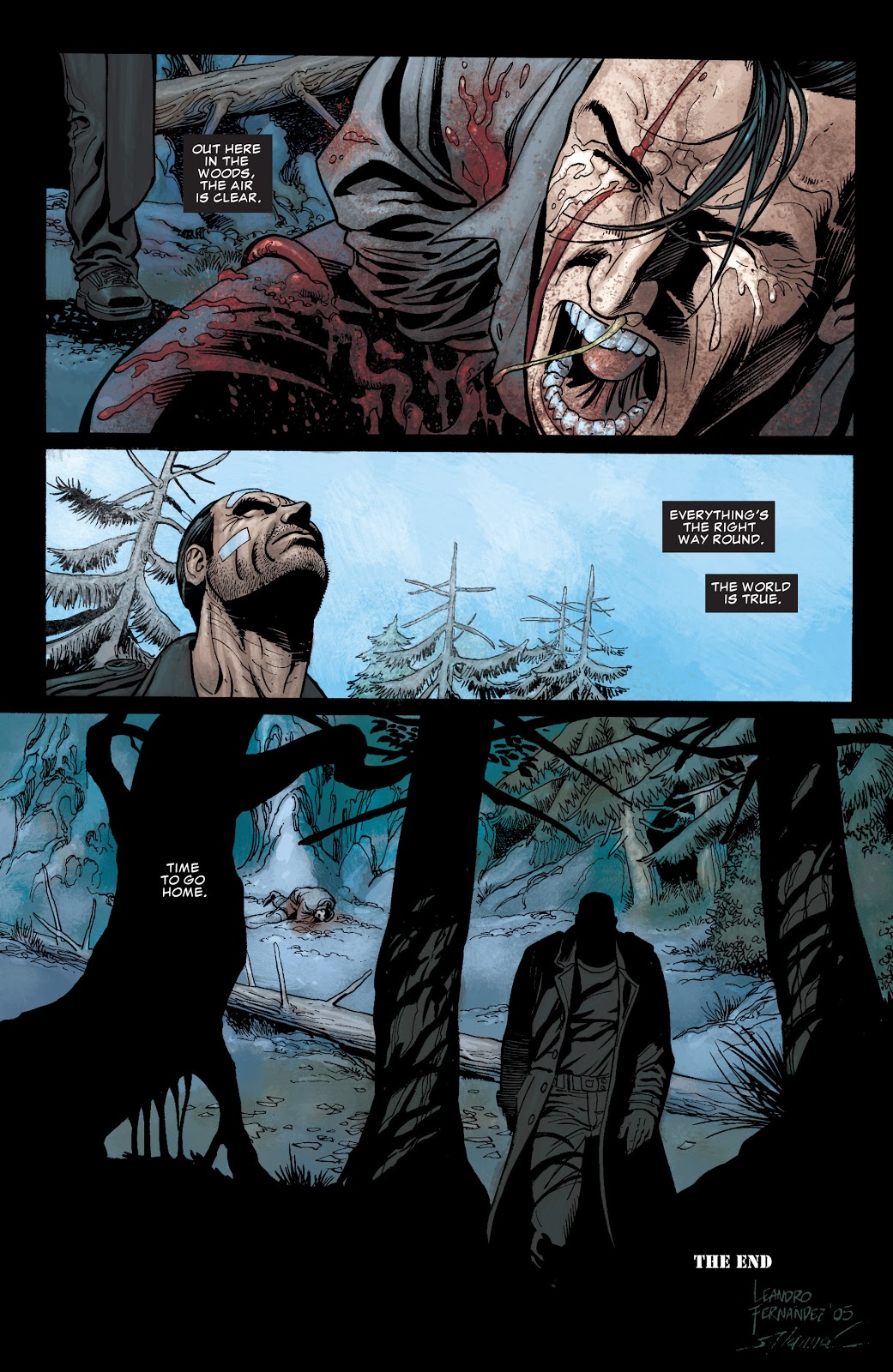 No one is coming to save Nicky Cavella from his gruesome fate.

We continue in the pages of The Punisher Max #6 when Frank Castle blows off his one-time partner’s head with a shotgun. Micro attempts to persuade Castle to join the CIA’s black ops unit. However, The Punisher declines. But when he finds out that the CIA is dealing arms and heroin out of Afghanistan to fund their operation, Castle decides to punish Micro. After Frank deals with a massive firefight between the CIA and the Mafia, he turns on his one-time partner and blows his head clean off. 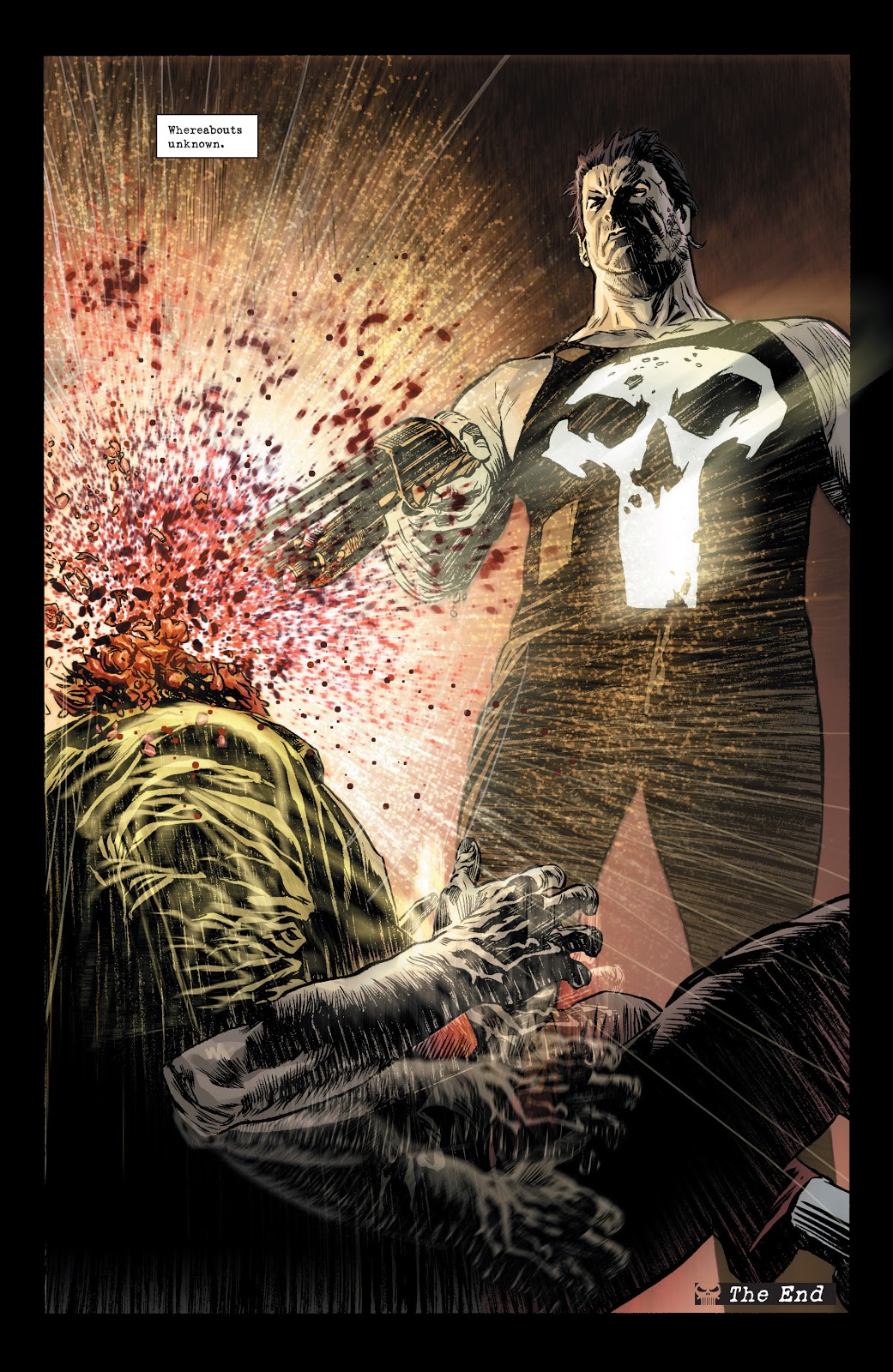 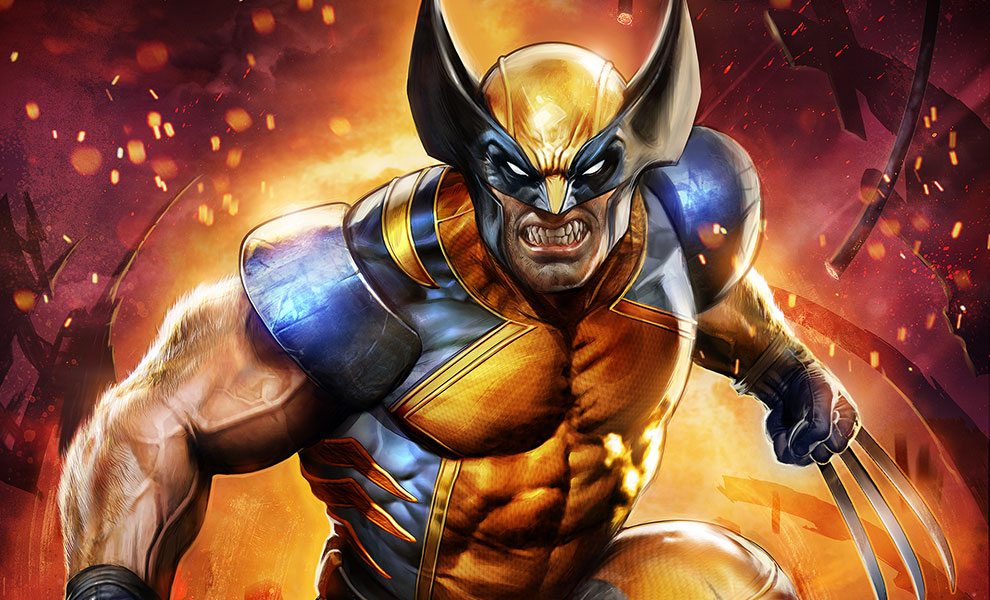 In the one-shot The Punisher Kills the Marvel Universe, no one could stop the Punisher even the famed mutant survivor, Wolverine. After The Punisher nuked most of the X-Men, he would come across Wolverine who was wallowing in grief at the end of a bottle. The two would engage in a no holds bar fight. But Frank Castle would gain the upper hand when he took grabbed Wolverine’s arm and used it against him. He shoved Wolverine’s iconic claw into his own chest. 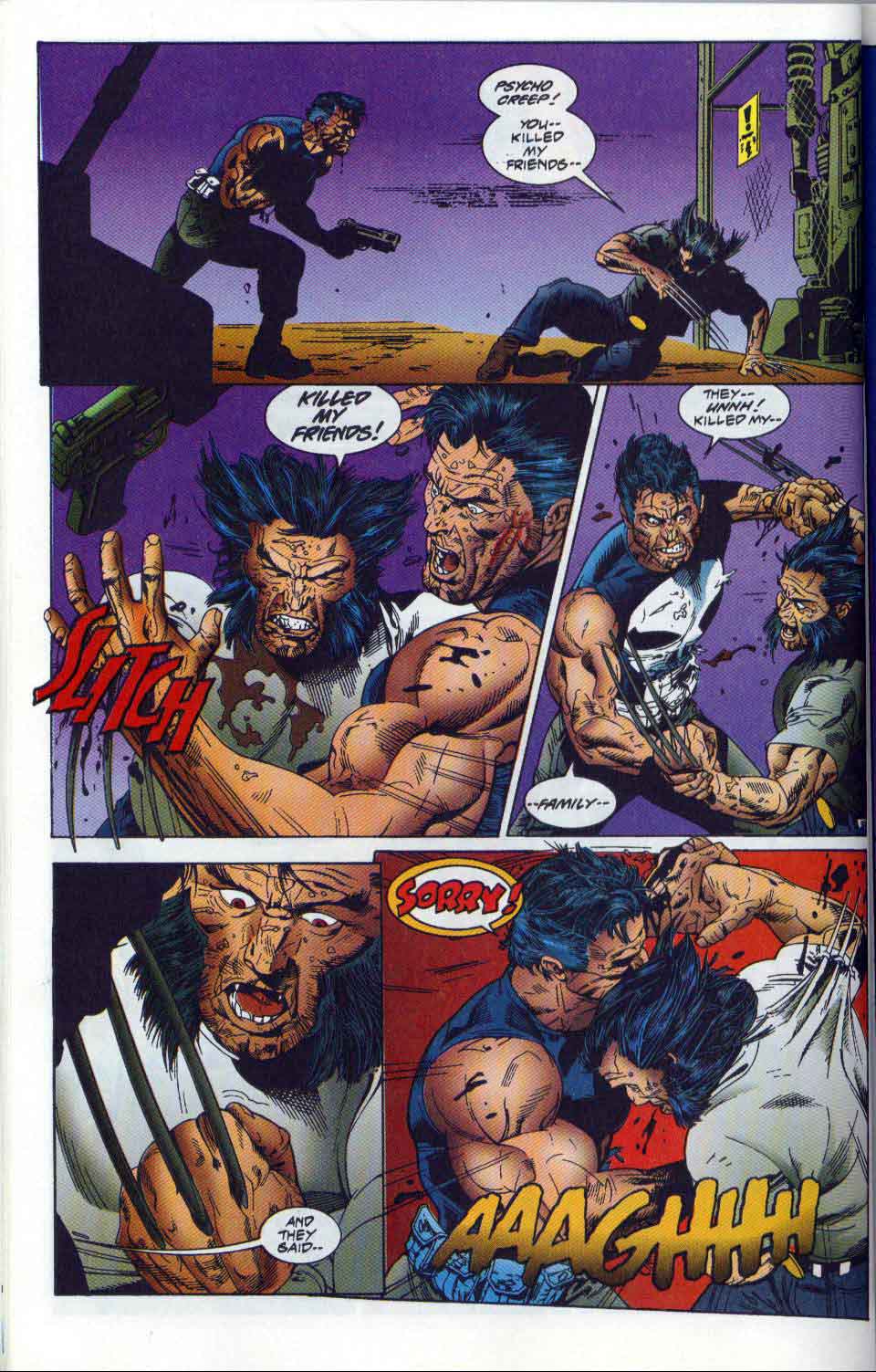 He then threw Wolverine into a high voltage power generator which fried the mutant leaving only his adamantium skeleton behind. 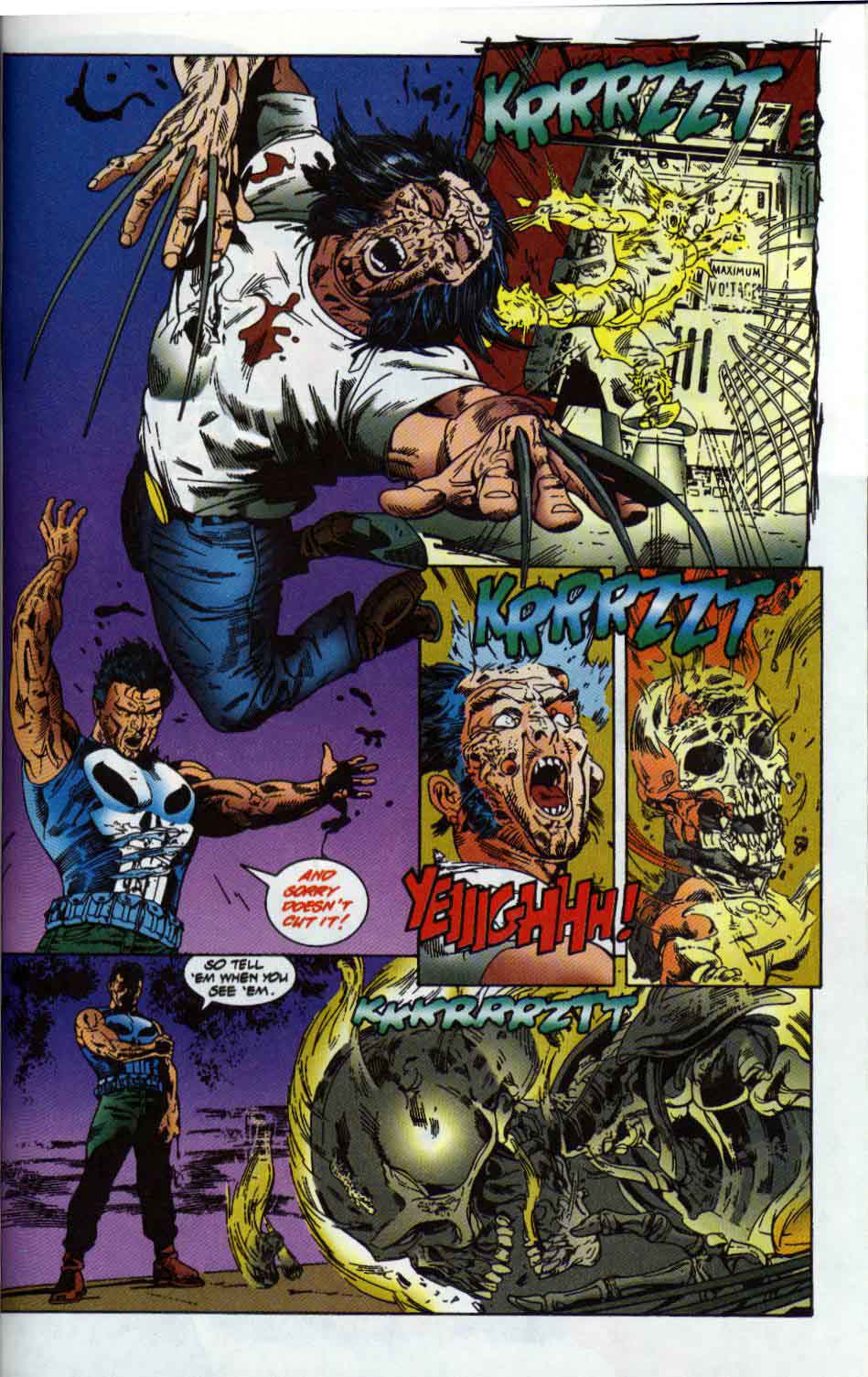 I don’t think Wolverine will be coming back from that.

In the pages of The Punisher: Naked Kill, Frank poses as a janitor as he infiltrates a building where a sinister crime element is video taping snuff films. When a security guard begins getting too close to him while posing as a janitor, Frank decides to permanently end him. He walks up behind the security guard, shoves a shot glass into his nose and front teeth which knock his teeth into the back of his throat preventing him from screaming. 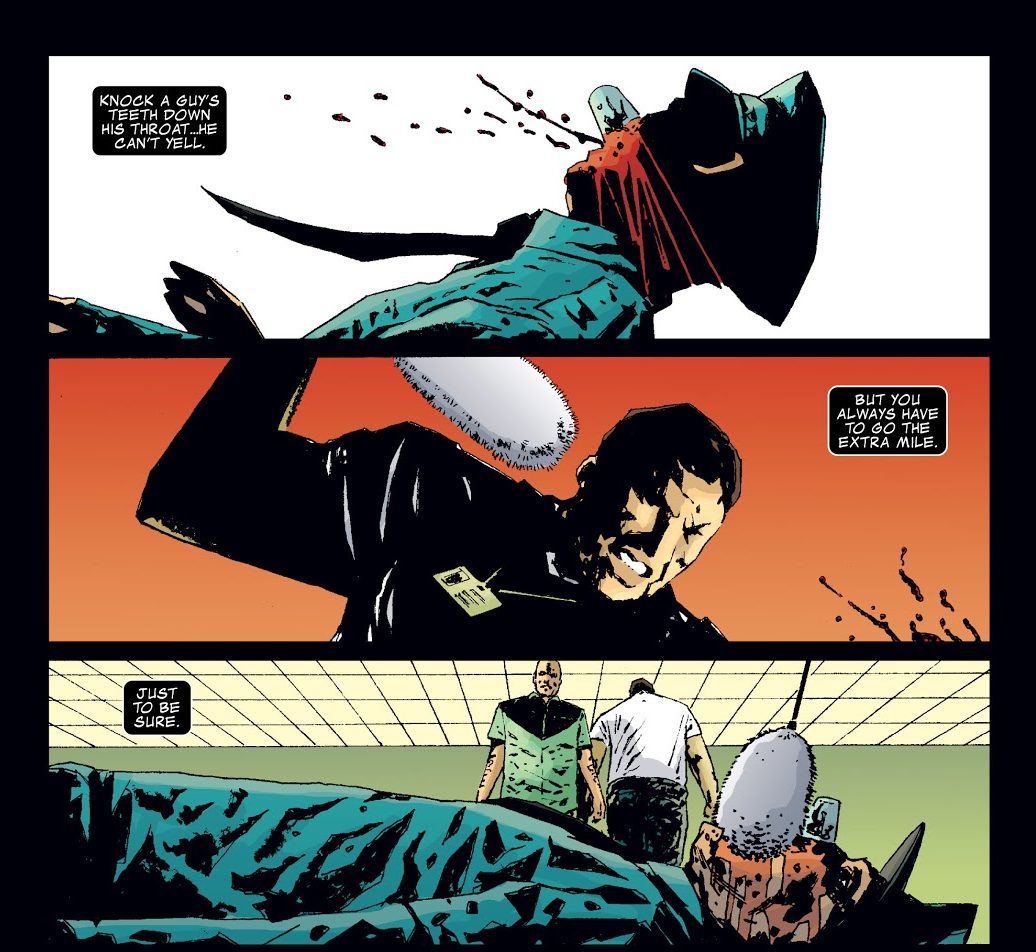 6. Hicks from the Bayou

In the pages of The Punisher Max #74, frank decides to take the fight to a bunch of Bayou dwelling criminals who are on the hunt for him. After blowing up a shack and exposing his location to his pursuers, Frank and his unlikely accomplice Nigel turn the tables.

Nigel lands the first blow taking one of their pursuers out with a shotgun shell straight to the head.

But it’s Frank who does the real dirty work. He uses a butcher’s axe to cleave one of their heads off and then rips a shotgun from another’s arm before chopping his head off with butcher’s axe. Needless to say these guys won’t be coming back to threaten Frank Castle. 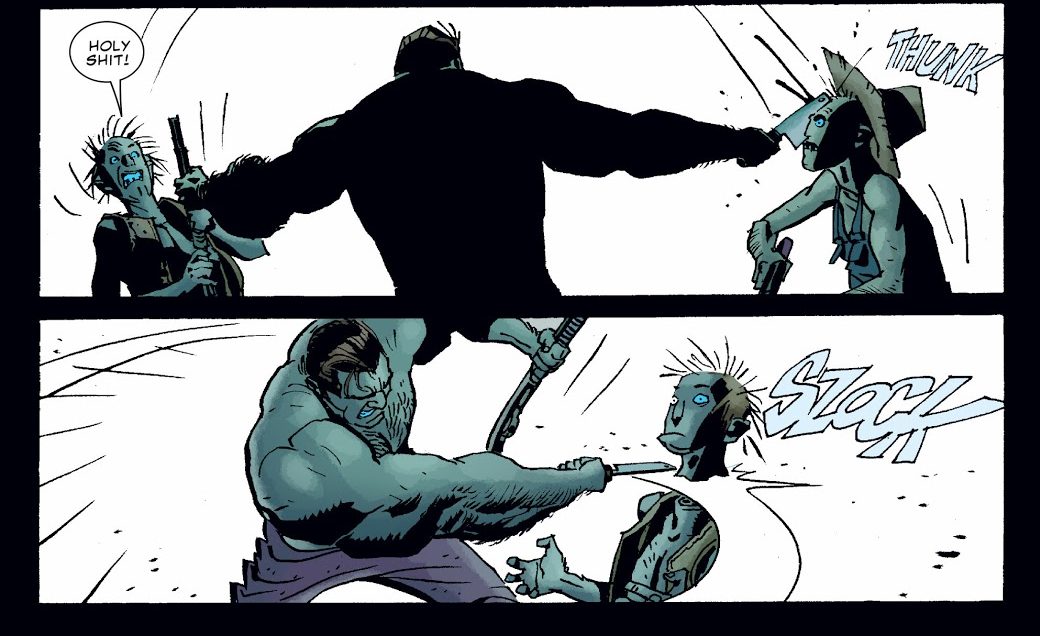 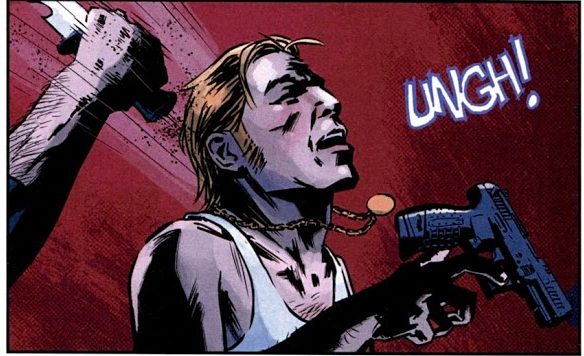 In the pages of Untold Tales of the Punisher Max #4 by Nathan Edmondson and Fernando Blanco, Frank Castle is on the trail of a number of sex traffickers. His first stop is a man named Arnold Lewis who makes his home in the San Diego Marina. Castle sneaks aboard his yacht and rips him away from the two women he is with on his bed. Frank then hogties him and puts him on a crane. 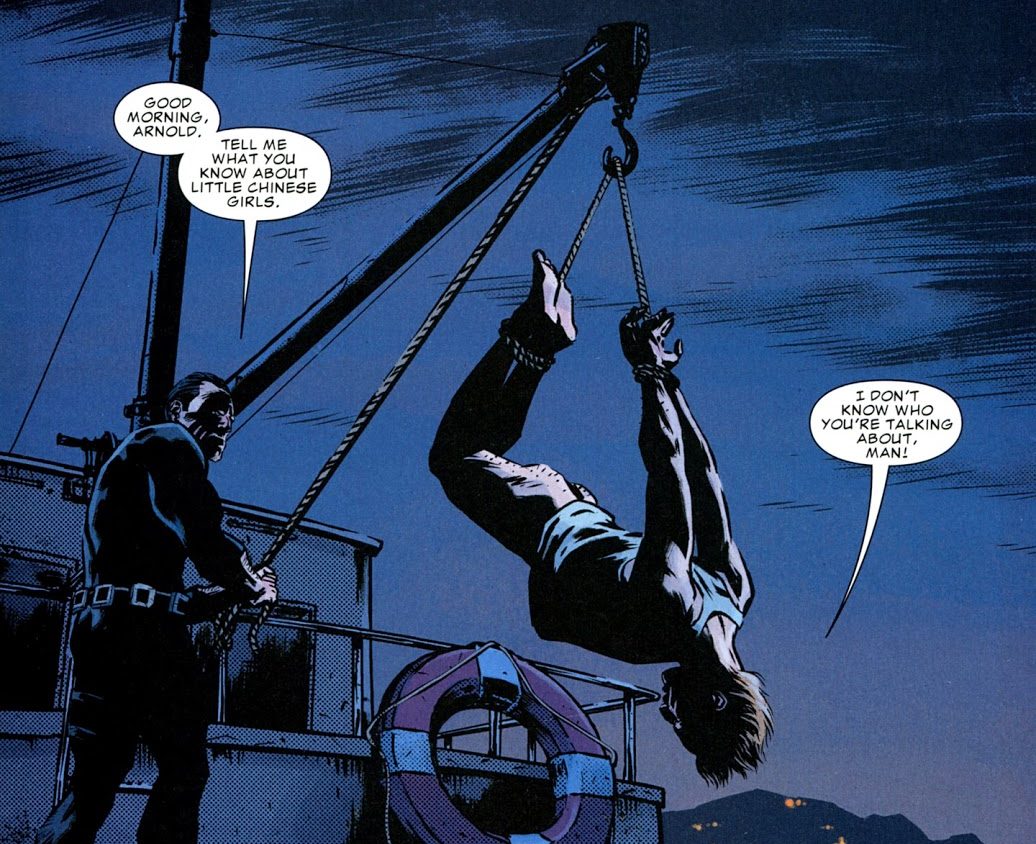 He subsequently tortures him to find information about the sex traffickers cutting him a number of times so his blood begins to fall into the water. 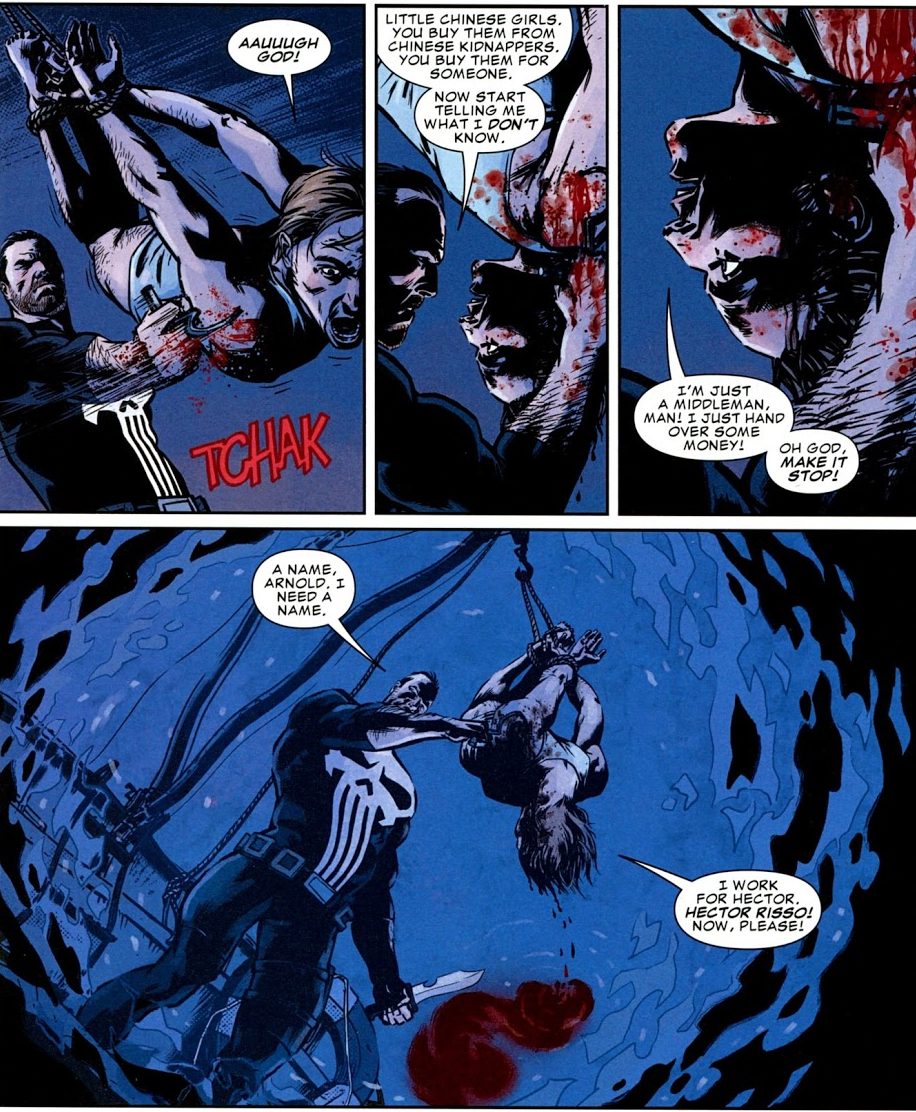 Arnold Lewis eventually gives up the name of Hector Risso who works for the Mexican Mob. If he was expecting any kind of leniency, he doesn’t really know Frank Castle. The blood in the water eventually attracted a number of sharks and Frank Castle let’s them have quite a big meal as he drops Arnold into the water. 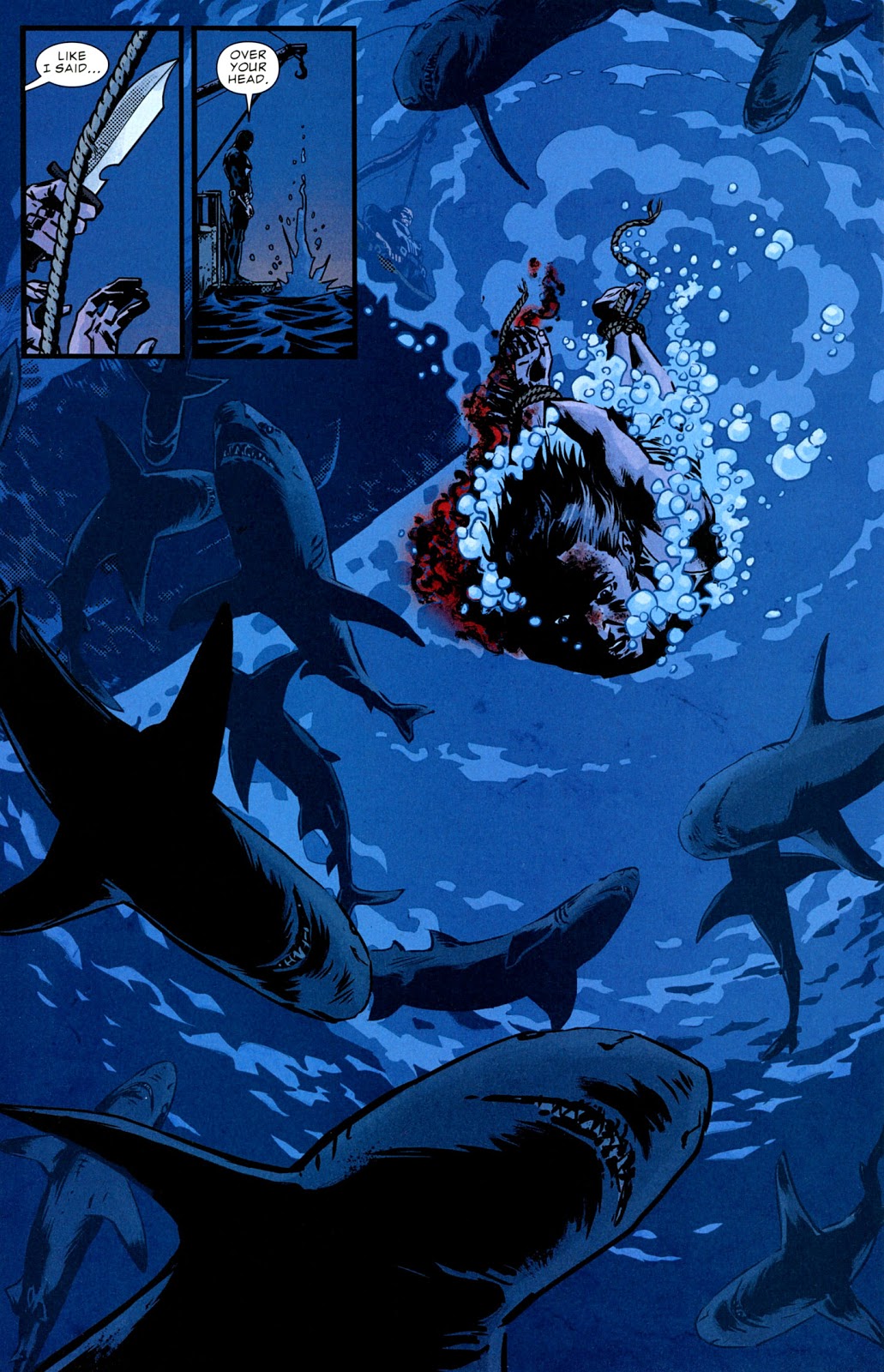 I don’t think he’s coming back to prey on any kids any more.

In the pages of Space: Punisher #2 by Frank Tieri and Mark Texeira, Frank Castle is hunting down the Six-Fingered Hand for their involvement in the murder of his family in a galaxy much different than our own. Upon receiving information from the Leader, Frank Castle discovers he was hired by Doctor Octopus. He then proceeds to capture Doc Ock and tie him to the front of his spaceship and give him a nice tour of the galaxy. 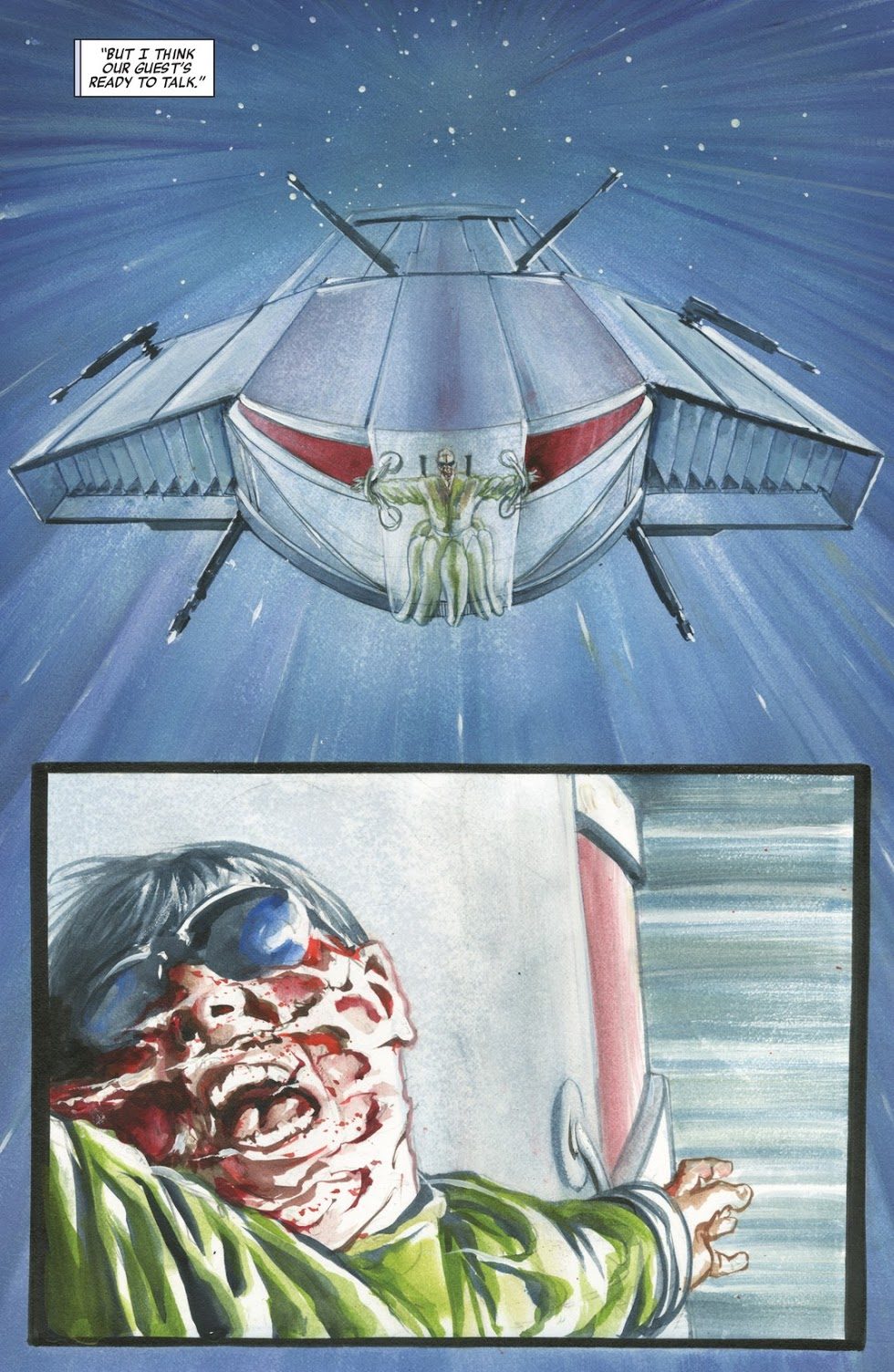 Unfortunately, it appears the little tour around space damaged Doc Ock’s vocal cords, Given that Doctor Octopus is now useless to him, The Punisher puts him out of his misery and blows his head clear off his body with a pistol. 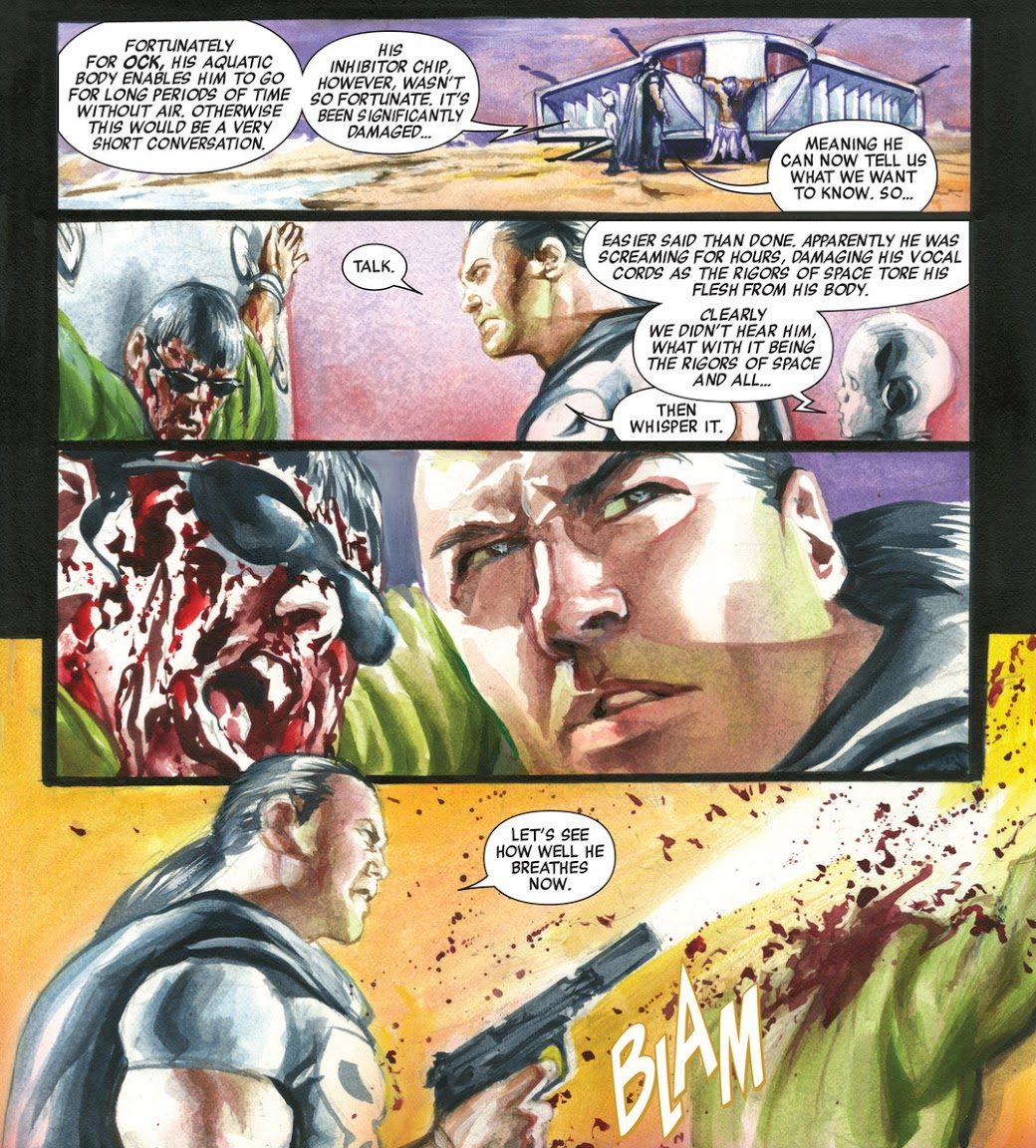 What are you favorite Punisher kills? Are there some you think we should have included?