On Wednesday, famed filmmaker Judd Apatow took to Twitter and called for fans to boycott all Fox properties. This was in response to a video that had collected an array of soundbites from different Fox News anchors as well as contributors who were attempting to push back against the claims of inhumane treatment of illegal immigrants.

Apatow was the producer of HBO’s Girls starring Lena Dunham. He also directed The 40-Year-Old Virgin, and wrote and produced This Is 40 and Knocked Up.

The immigration issue has taken over the airways, social media, and newspapers as people on each side of the issue attempt to counter the other’s claims. This comes after U.S. Attorney General Jeff Sessions ordered in April that prosecutors were to take a “zero tolerance” stance to illegal immigrants who crossed the border illegally.

When you support any Fox product you support THIS. Let’s all shut off Fox. There are so many channels, so many movies. We will survive. If Hitler also made adorable romcoms we probably wouldn’t go. https://t.co/q7AEoRE1ZV

Apatow made it clear he didn’t just want Fox News boycotted, he wanted people to stop watching their cable programming as well as movies which includes shows like Gotham, Legion, and The Gifted as well as a number of X-Men films including Deadpool, Deadpool 2, X2: X-Men United, X-Men: First Class, and more.

Given that Fox is currently in the middle of a buy out from Disney, it’s unclear if Apatow’s call to boycott Fox would also extend to Disney properties which include Star Wars and Marvel Studios.

Many of Apatow’s fans were in favor of his call for a boycott.

Good point. At least until the Disney buyout is approved. (Then it'll own all the good Fox stuff, and Fox will be left with Fox Sports and Fox News.)

I just deleted my FXNow app…

One Twitter user even advocated boycotting all of Fox’s advertisers. 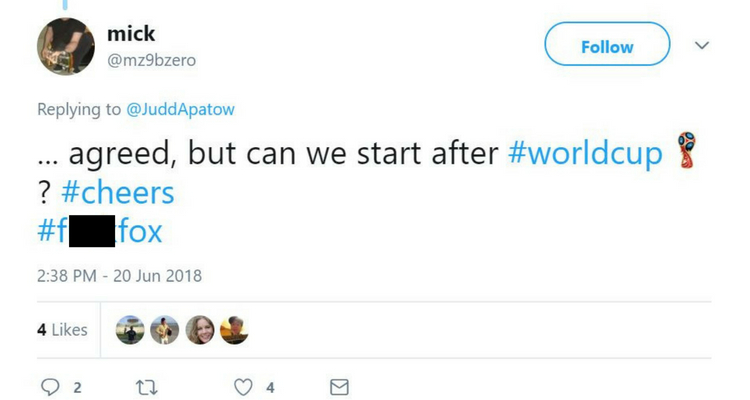 What do you think of Apatow’s call to boycott Fox? Will you be participating?