Avengers 4 Cinematographer Trent Opaloch recently updated his resume on his website with a title for the upcoming Avengers 4 film.

A screenshot of the page captured by Omega Underground reveals the title could be Avengers: End Game. 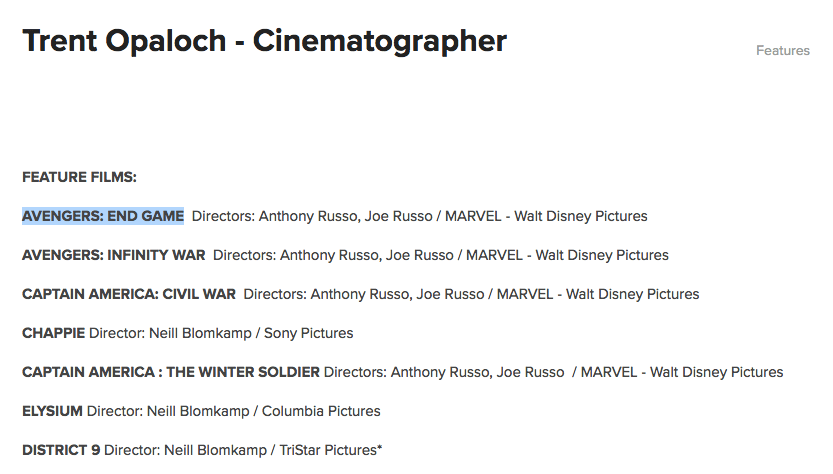 The page has since been updated to change the title of Avengers: End Game to Avengers 4.

Doctor Strange gave Thanos the Time Stone after he already told the Guardians of the Galaxy, Spider-Man, and Iron Man that he had seen 14 million possible outcomes and only one of them saw them victorious. Given Doctor Strange’s future knowledge, he handed over the Time Stone because that’s what occurred in that one out of 14 million possible outcomes where the Avengers were victorious.

Interestingly enough, Joe Russo has indicated the title of the film is not spoken in Avengers: Infinity War. In an interview with Uproxx, Russo was asked if the title was ever spoken in Infinity War.

Avengers 4 is supposed to be even better than Avengers: Infinity War according to writers Christopher Markus and Stephen McFeely, “Avengers 4, if anything, is better than what you just saw. And bigger. We’re very pleased with how it’s shaping up.”

As for when we will get official confirmation on the title for Avengers 4, Marvel Studios boss Kevin Feige recently told Collider it would happen after the Captain Marvel teaser.

“That’ll be after the Captain Marvel teaser probably, announcing that title. It’ll be towards the end of the year with however we launch that film.”

Do you think Marvel Studios will use Avengers: End Game as the title for Avengers 4 or could we see them go with a different name given the rumors surrounding this title. If you were in charge of naming Avengers 4, what would you call it?