Mortal Kombat saw a massive resurrection when it released their tenth installment of the video game franchise, Mortal Kombat X, back in 2015. The game became the fastest selling game in the history of the franchise and was the top selling PlayStation 4 game in the month of its release. It was even described as “one of the best fighting games in years,” by Game Informer.

With the popularity of the franchise seemingly at its peak, it’s no surprise film studios would want to resurrect the movie franchise as well. The last time we saw Mortal Kombat on the big screen was back in 1997 with Mortal Kombat: Annihilation.

That’s about to change as a reboot is being spearheaded by Aquaman director James Wan and his Atomic Monster production company. Wan will be in the producer’s chair for the reboot and he’s already locked in Simon McQuoid to direct based off a completed script by Greg Russo.

With the script completed, there’s a new report from That Hashtag Show detailing the characters who are expected to appear in the film.

Cole Turner is a brand new character to the Mortal Kombat franchise. He will also be the lead. He’s a struggling and widowed boxer. He’s got a young daughter who he cares about more than anything. He’s got a Rocky-like attitude and when he’s faced with overwhelming odds he refuses to quit. 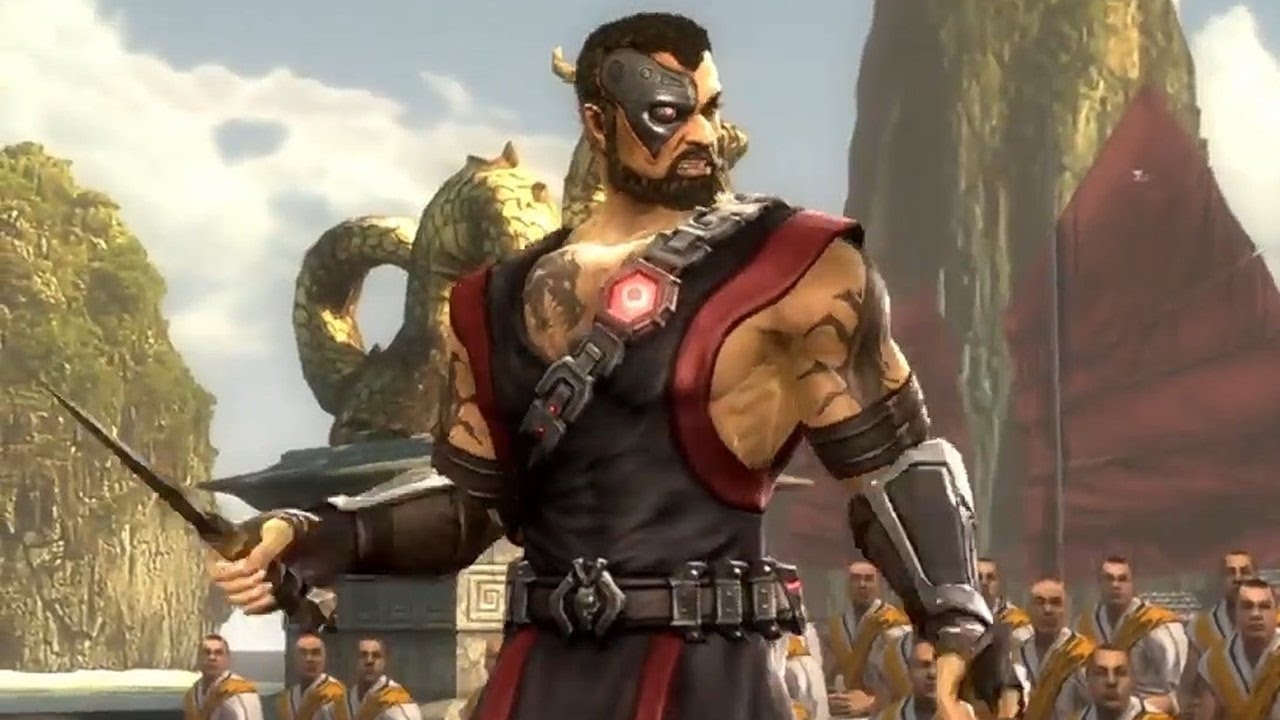 Kano is one of the original Mortal Kombat characters first appearing in Mortal Kombat in 1992. He’s a calculating Australian mercenary and member of the international crime cartel Black Dragon.  He’s had a number of roles in the games even becoming the general of Outworld emperor Shao Kahn’s armies. His most recent iteration sees him as a Special Forces informant and an arms dealer to Kahn’s army. It appears he will be a supporting lead male and will be a mercenary for hire in the film. 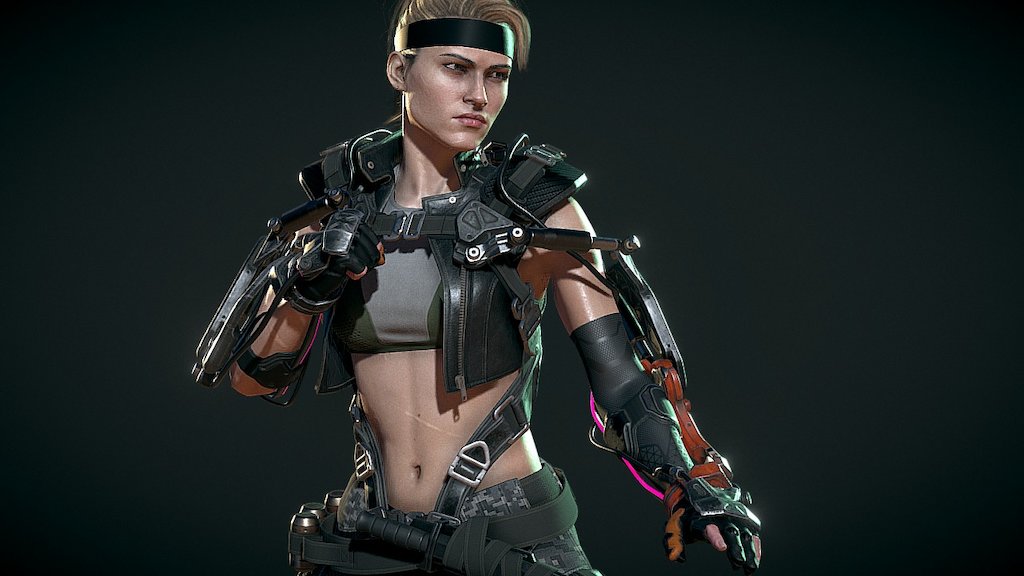 Sonya Blade is another original Mortal Kombat character and has appeared in almost all of the games since the franchise’s inception. Sonya has also appeared on the big screen before courtesy of Bridgette Wilson. In the original film, Sonya takes on Kano and kills him after he plotted with Shang Tsung to bait her into a duel.

In this reboot Sonya will be a “brainy blonde writer who chases the prophecy of Mortal Kombat.” She will recruit Cole and fight bravely and selflessly for her team.

The immortal god of Thunder and protector of the Earth realm will make his return to the big screen as he trains the Earth team in the Underworld.

Raiden was one of the original Mortal Kombat characters and has appeared as a playable character in every single installment except Mortal Kombat 3. He works endlessly to protect Earth from the machinations of those in Outworld. 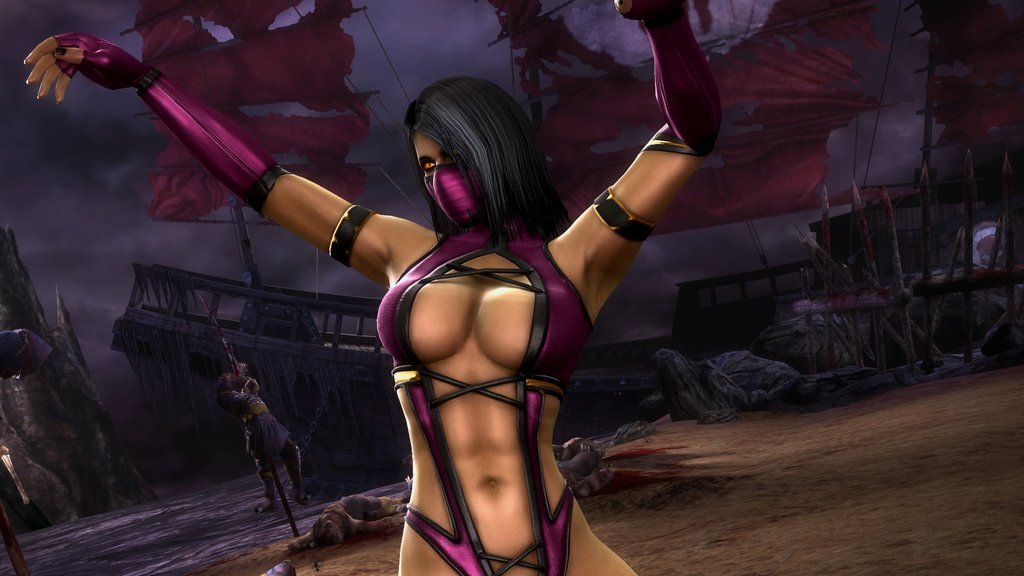 Mileena will be a member of the Outworld who wears a sheer gown over thigh-high boots and a revealing one-piece. She will also wear a veil that covers her nose and mouth.

In the video games Mileena is a sai-wielding assassin. In the most recent iteration she is psychologically unstable and even cannibalistic. She also happens to be the sole surviving heir of Shao Kahn and vies for the Outworld throne with Kotal Kahn. 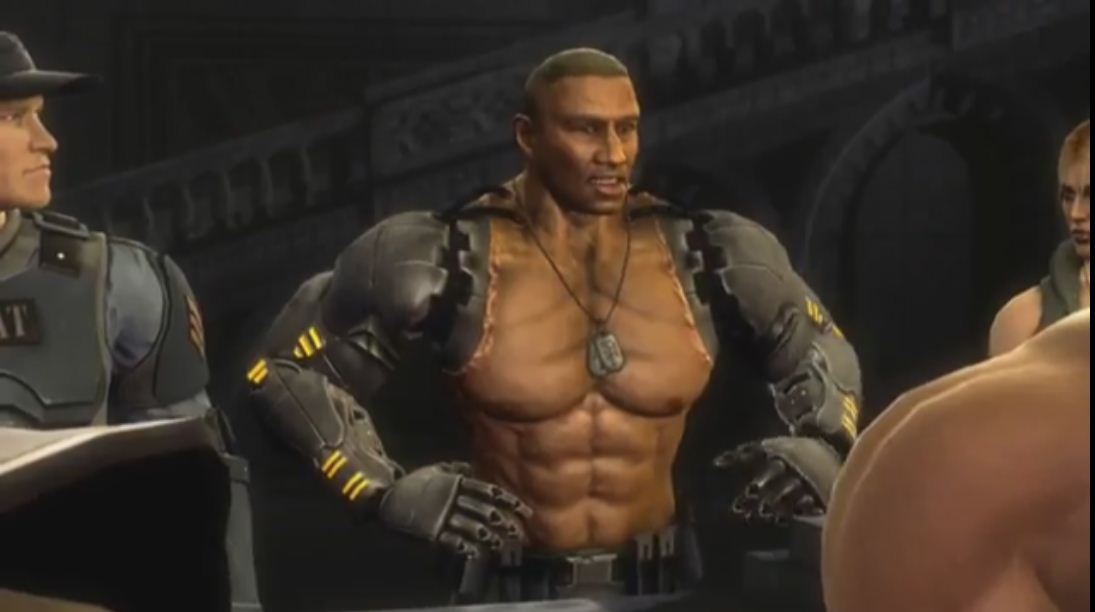 Jax will once again appear on the big screen. He will be a mercenary/military officer who loses both his hands before joining Sonya and Cole to save Earth from Outworld.

Jax first appeared in Mortal Kombat II and was a United States Special Forces operative and the superior to Sonya Blade. He’s known for his two bionic arms which he uses to devastating effect.

Liu Kang will also return to the big screen. He is described as a fire throwing ninja warrior who is a champion of Earth realm.

Kang was one of the original seven Mortal Kombat characters from the 1992 video game. He was originally a Shaolin monk who enters the Mortal Kombat tournament and wins. Upon his vicotry he became the champion and chief defender of the Earth realm. 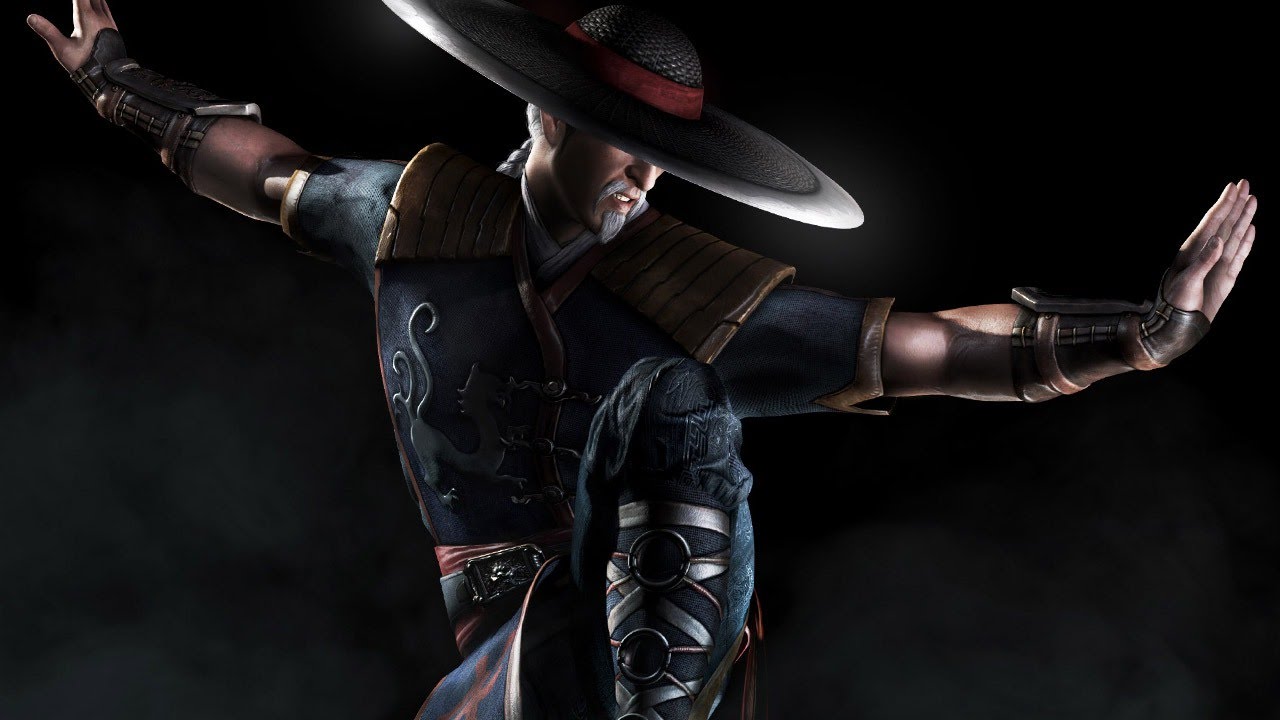 Kung Lao will be the mute warrior monk brother of Liu Kane who wields an “all powerful boomerang hat.”

In the video games, Kung Lao like his brother Liu Kang is a former Shaolin Monk and former member of the White Lotus Society. He works to train fighters at the Wu Shi Academy in preparation for Mortal Kombat and has even challenged The Emperor of Outworld on several occasions. 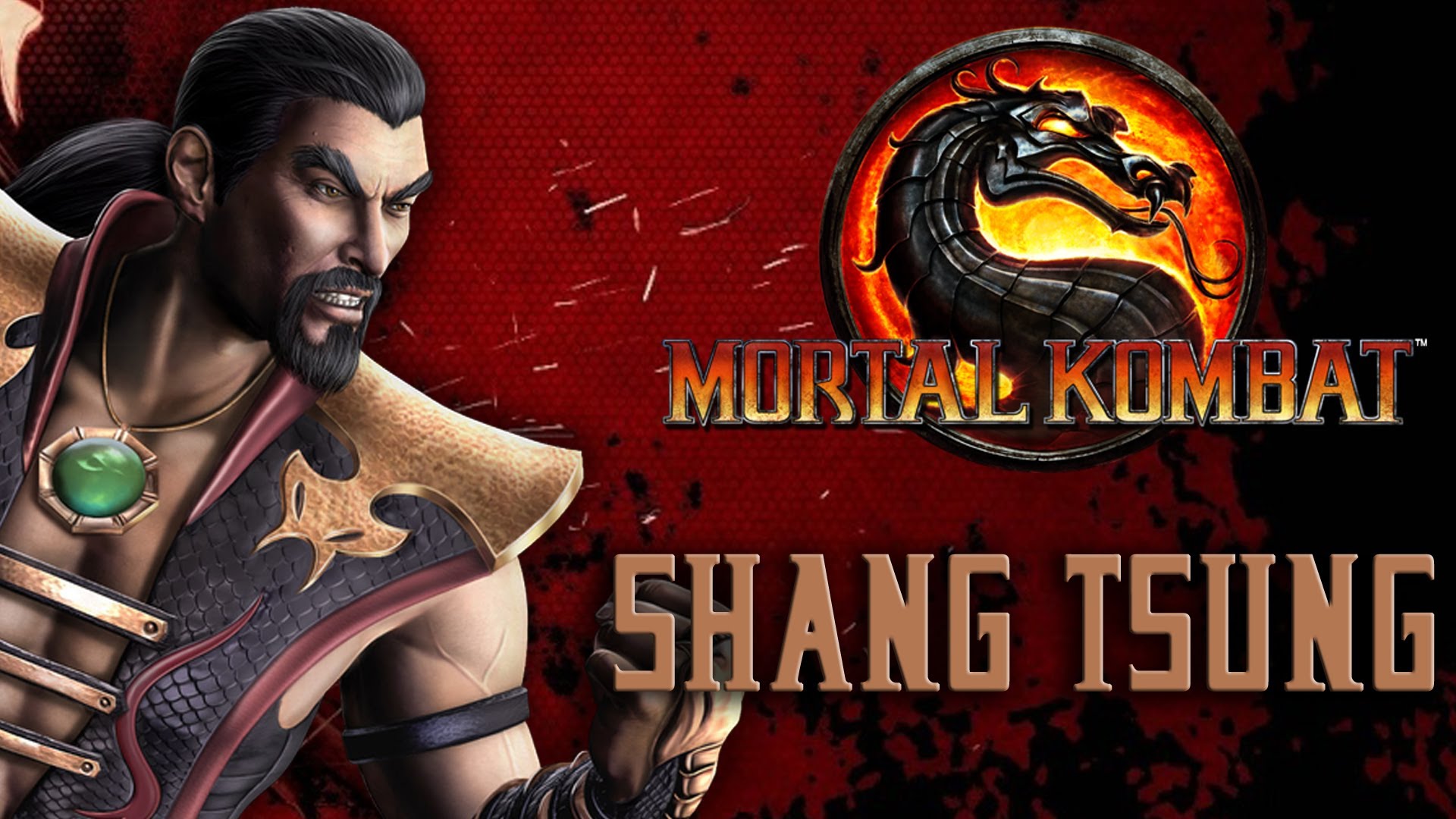 Shang Tsung is an evil sorcerer of Outworld whose mere presence is a storm cloud of dark energy. He also has an ever-changing face that unfurls an evil smile. 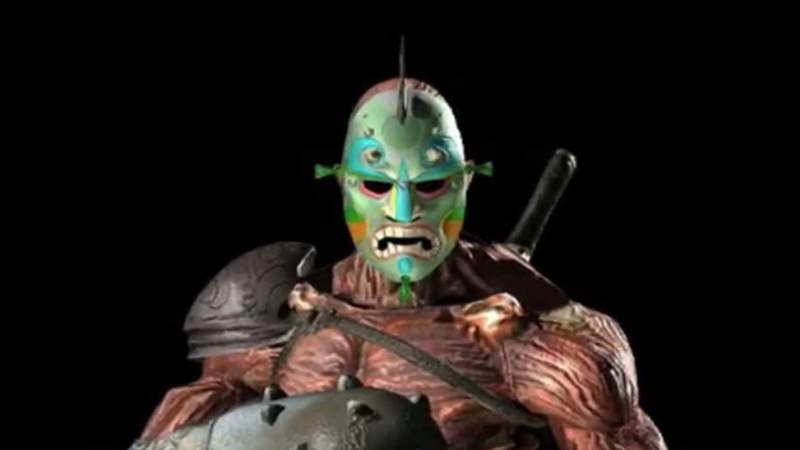 Drahmin will appear with an Oni devil mask on his face. His body will also be sinewy and twisted. One of his arms will feature a giant, spiked club.

In the video games Drahmin is an Oni, a demon from the fifth plane of the Netherrealm. He wields a massive spiked club on his right arm. He also wears a mask called the “Face of Kun-Lo.” He also wields an army of flies which he uses a projectile. He was originally a cruel human warlord in Outworld, but he was subsequently exiled to the Netherrealm where his body and sould were tortured for eternity. His mask is the key to his power. With it on he is able to control his rage and fight in a disciplined style. However, when it is removed he loses focus and ferociously attacks with murderous insanity. 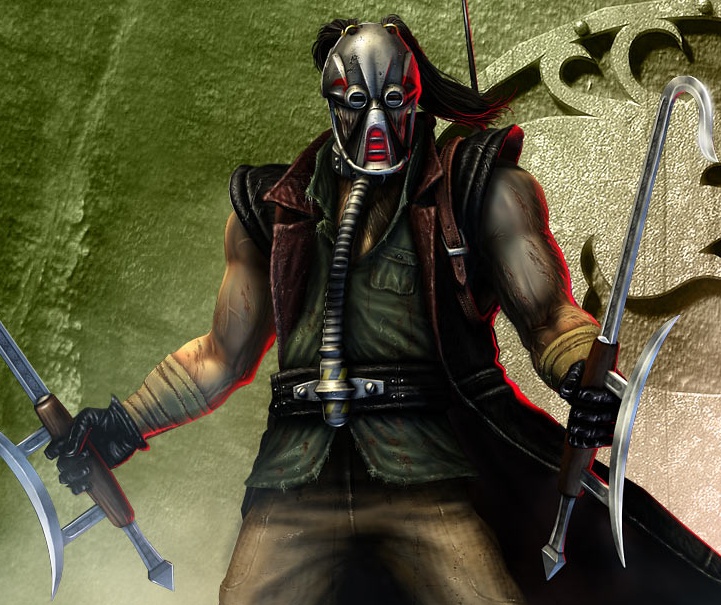 Kabala will be depicted as an evil assassin of Outworld. He will wear a black armor vest with a trench coat. His entire head is covered by a scarred black respirator. He wields two razor sharp hook swords.

Kabal first appeared in Mortal Kombat 3 and was a member of Kano’s Black Dragon criminal organization. He had actually reformed and became a defender of the Earth realm. He wears the mask because he attacked by Shao Kahn’s extermination squads which left him seriously disfigured. He would eventually return to evil by reforming the Black Dragon. Only return to the good side to defend Earth from Kahn in Mortal Kombat X. 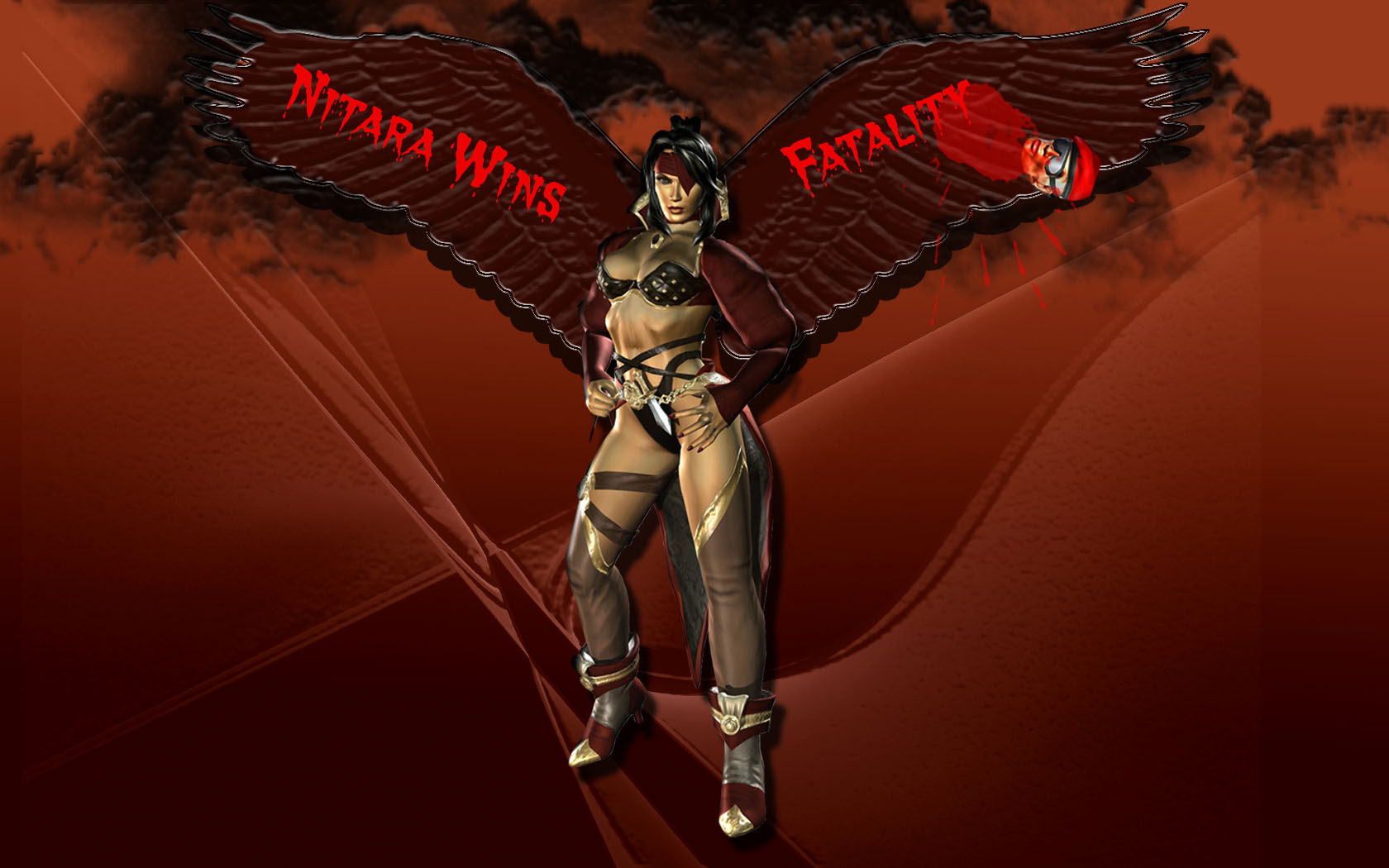 Nitara will be a black-haired vampire of Outworld. She will have two massive wings from her shoulders with blood dripping from her fangs.

In the video games Nitara was a bit of an independent. She was focused on securing her own realm’s Independence from Outworld. She spent much of her time searching for a mysterious orb that binded her realm of Vaeternus to Outworld. She also works to prevent the genocide of her race by the demon known as Ashrah. 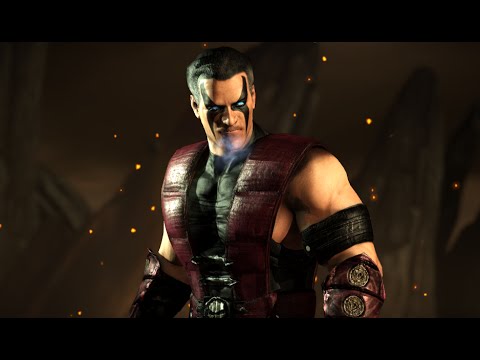 Reiko will be an armor-clad Outworld General with white glowing eyes. He will wield a massive war hammer.

n the video games Reiko is the general of the armies of Shinnok, Shao Kahn, and the Brotherhood of Shadow. In the 2015 comic book series he served as an adviser to Mileena while plotting against her to claim Outworld’s throne for his own.

There will be a number of other characters as well including The Overseer who mans the clock towers and the training grounds for the warriors of Earth realm. He will be joined by Cole’s young daughter, Emily, who is described as “wise-beyond-her-years.” Cole’s mother-in-law, Sophia, will also be featured. She is actually the primary guardian of Emily. Finally, Cole’s judgmental sister-in-law, Jess, will also be featured. She believes Cole is a bad father and lives with her mother Sophia and her niece Emily.