We are getting another brand new first look from Warner Bros. and DC Films’ Aquaman film. We previously got to see Aquaman, Black Manta, Mera, Atlanna, Ocean Master, and Vulko. And now we are getting our first look at Djimon Hounsou’s Fisherman King.

The first look comes courtesy of Entertainment Weekly and they describe the image as “The Fisherman King (voiced by Djimon Hounsou) in his royal palace, one of the seven underwater kingdoms.” Along with the Fisherman King, the photo also shows off the Fisherman Queen portrayed by Natalia Safran, the Princess portrayed by Sophia Forrest, and a royal guard on the right.” What makes these characters interesting is they are more mermaid than human. You can see the royal guard’s fish tail on the right and it appears all of these characters will have a similar tail.

According to EW this scene also features Patrick Wilson’s King Orm a.k.a Oceanmaster. Oceanmaster is visiting The Fisherman King, the character with the trident in the middle, to get his support to declare war on the ocean-polluting surface world.

Producer Peter Safran elaborates on the Fisherman King and his kindgom:

“After the fall of Atlantis, some of the kingdoms evolved and some devolved. This is one that evolved. This is a kingdom that’s primarily artistic and cerebral, with poets and philosophers.”

The Fisherman King looks to be a brand new character for the film. However, DC Comics did recently introduce the Fisher King in Dan Abnett’s current run on Aquaman. He appeared in Aquaman #5 and was the leader of N.E.M.O. and claimed he was the “Lord of the World.” N.E.M.O. was basically a shadowy organization that attempted to manipulate world events in their favor. Under the leadership of the Fisher King they would remain in the shadows; however his reign would be short lived after meeting with Black Manta. 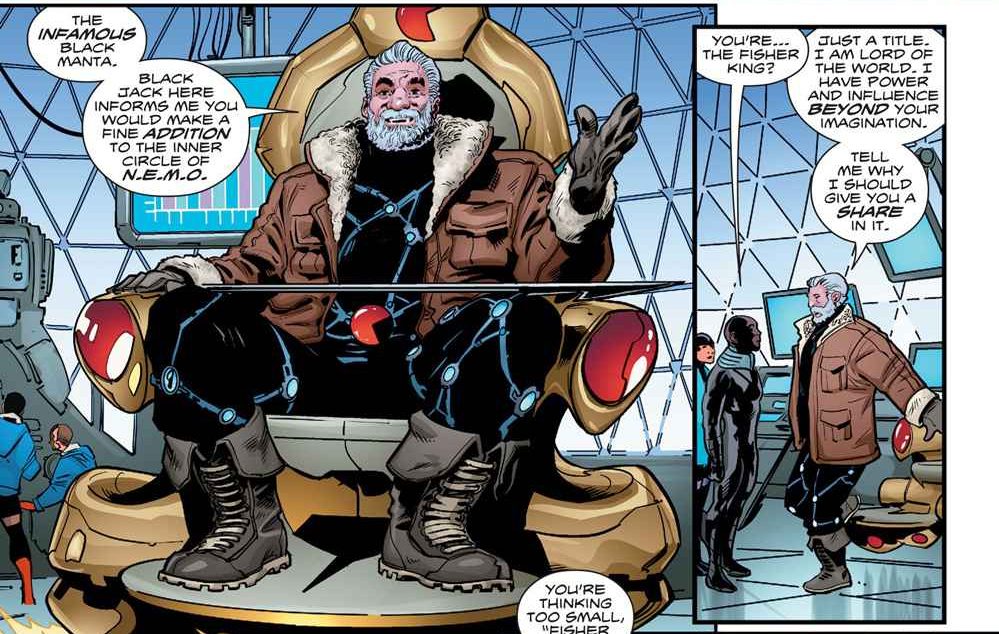 Jason Momoa spoke to Comicbook.com to give quite a bit of details on what we can expect from the film.

“You’re going to see that I really wanted him to be that gruff thing, because he has to become king. If Justice League is like seeing him at his lowest, and not just his lowest, but this loneliness that I wanted about him, so when we get to Aquaman you know why he became that, and how he had been put in that lonely spot.”

“And how he has to bring these two worlds together. Because you’re going to see this ocean world, which we just pollute, and how do these people feel underwater with what the land does to the ocean. And this war that is going to come between the two, and I’m the only one that can link the two. He has to do it. He doesn’t want to do it.”

He then goes into detail on a few specific scenes that we will see in the film:

“In the story, we’re going to see a couple different younger versions of me. And even before I was born, so you’ll know where my mother came from, Atlantis. We’ve got to establish seven different kingdoms and the threat. Surpassing Justice League, this moment in time is his call to become king. The only thing that can save Atlantis is me fighting my own brother. There’s a big battle, and there’s an epic [fight]. It’s also a big road movie, because we travel all over the world. It’s got that Star Wars quality of gigantic ships and guys riding sharks. It’s going to be this whole world you’ve never seen before. You’re going to see him start as this guy who probably rides bikes, works on cars. You get to see him this one way as kind of a dirty, dark, drunkard, and then turn into this regal king.”

What do you think of the design for The Fisherman King? Are you excited for Aquaman?