Netflix will be rebooting the popular She-Ra cartoon in She-Ra and the Princesses of Power. The show will star the voice talents of Grey’s Anatomy’s Sandra Oh, Orange is the New Black’s Lorraine Toussaint, Black-ish’s Marcus Scribner, Dancing with the Stars’ Jordan Fisher, and Young & Hungry’s Aimee Carreror.

On their website, Netflix describes the show as “a magic sword transforms an orphan girl into warrior She-Ra who unites a rebellion to fight against evil.”

Back in May, it was revealed that cartoonist Noelle Stevenson would be co-executive producer on the project alongside Chuck Austen in collaboration with DreamWorks Animation Television. Comic fans will know Stevenson from her work on Lumberjanes at BOOM! Studios. 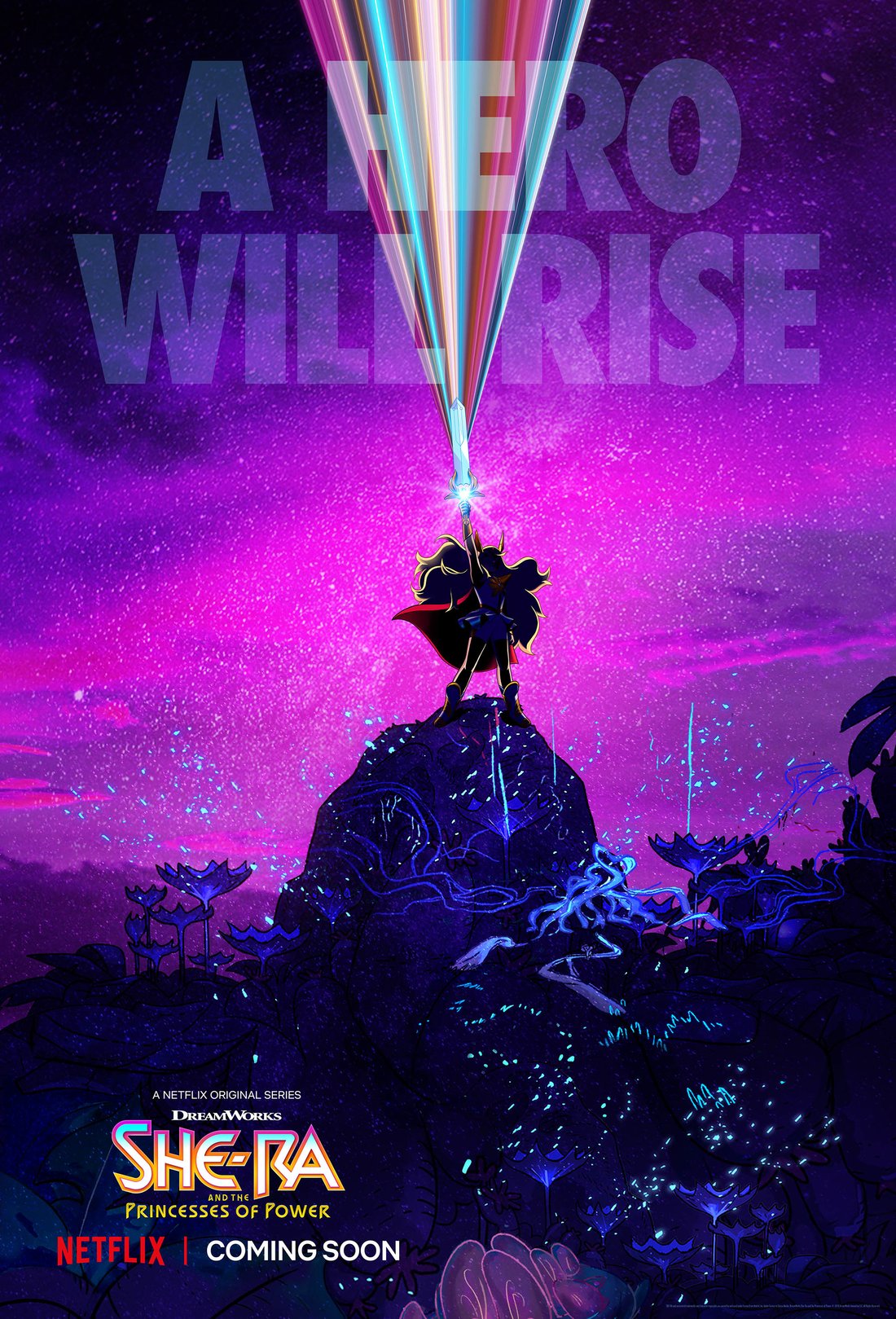 Along with releasing a teaser poster for She-Ra, Stevenson discussed the project with Entertainment Weekly:

“She–Ra was ahead of its time. I’m so excited to bring these stories of female power and love and friendship back now when it seems like we need them more than ever.”

As you can tell, you can’t really get a good look at what She-Ra will look like from the official teaser poster. However, a leaked photo of the character design for She-Ra has surfaced and folks are not happy with it at all.

YouTubers Kneon and Geeky Sparkles had strong words to say. Kneon described the character design as Ben 10 in drag. But Geeky Sparkles was much more opinionated:

“I’m still waiting for them to say this is Prince Adam that decided he wants to be Adora now. This is not a girl. This is a guy. The arms are man at arms. That is a man’s face. That is a shaved head with a mullet maybe.”

Others expressed their distaste for the design and compared it to the original 1980s design of the character.

I had LOW expectations for the new She-ra but… Jeezus what the hell is this? pic.twitter.com/AQ5xdQMWA4

So She-Ra the Princess of Power is getting a reboot on Netflix. And this thing to the right is basically how she will look like. It is beyond disturbing how there is this need to take something that had an amazing art design and make a joke out of it. pic.twitter.com/MiUAIiB4ge

They really won’t rest until the entire history of human civilization has been plundered and stripped of all beauty and wonder ? pic.twitter.com/fHNhocOdgu

I don’t see the problem. I think Hank Venture looks awesome in his She-Ra cosplay.

If it’s only for kids, there’s no reason to use that character, name, world, premise, etc. since they’ve never heard of this character. They can come up with their own new ideas, right? Why redo She-Ra like this? Also… body-shaming? Not too cool.

I just showed my oldest son and he laughed. Said that wasn’t She-Ra and is now messing with his sister about it, who is now in a bad mood due to her being a big classic She-Ra fan.

There were some folks who did dig the design.

oh my gosh the new outfit! she looks like utena! there are definite similarities… i’m so excited for she-ra pic.twitter.com/iRNJW6V8oK

Digging this SHE-RA redesign for the new Netflix toon: pic.twitter.com/NKDHSSVX3T

I was around when the first She-Ra appeared on the scene. And now, I’m very excited to see the new version of her! #SheRa pic.twitter.com/6hjDlKpkCj

Rae Geiger, a character designer on the Netflix She-Ra series, posted a clearer look at the new She-Ra design…. and I dig it to be honest pic.twitter.com/5ykhaOWWkY

How could anyone not be 1000% into that She-Ra redesign?

I really love the new She-Ra design it’s so good I love it and I cannot wait to see this show pic.twitter.com/M2yRXi1Nzy

And then there were the folks who were hating on the people hating the redesign.

so everyone is now angry at the she-ra thing right??? you know you don’t have to watch it right???? you know the original still exists right????

and I know that all of you are just complaining for the sake of it and probably haven’t thought of She-Ra in 20 years or more.

So fanboys are crying that SJW’s are ruining She-Ra. A character whose was voice was done by a lesbian, taken from a series with characters created by gay men. Know why Adam/He-Man seems gay? He was created by gay men. Hell look at Filmation’s 80’s era logo, it’s a rainbow pic.twitter.com/GMDW4Ngwn1

**Editor’s note** She-Ra was voiced by Melendy Britt. She’s married to her husband and has multiple kids. One of the original founders of Filmation, the studio behind He-Man and She-Ra, Louis “Lou” Scheimer was also married to his wife Jay until her death in 2009. They had two kids together. Rainbow logos were commonly used for companies in the 80s including Mac, Reading Rainbow, NBC, and others.

I don’t care if you were eleven in 1985 and She-Ra was your first crush. Kids of all genders deserve to get what white boys of the eighties took for granted: to have heroes who embody *their* fantasies, instead of telling them to embody someone else’s fantasies.

So here’s my problem with the “She-Ra should be sexy!” thing. It’s basically saying that young girls can’t have anything for themselves. Media aimed at them must first appeal to grown men. And that’s insidious.

Every straight dude in their 30s complaining that the new She-Ra design is different from what they remember: pic.twitter.com/2BmZYXmaAt

Even one person decided to hate on She-Ra in general and expressed his support for He-Man and the Teenage Mutant Ninja Turtles.

I have been talking about She-ra. But I couldn’t care less. I hated the show when I was a kid. I like He-man and TNMT better. And Robocop.

What do you think about the new She-Ra design?