Buffy the Vampire Slayer is getting rebooted for television and will feature a black female lead as the new Slayer. The news was not taken well by some folks, especially those writing at The Mary Sue.

Princess Weekes would headline her article, “No, I Don’t Want a Black Buffy Reboot, and Here’s Why.” Weekes would go on to explain why she doesn’t want a rebooted Buffy the Vampire Slayer with a black lead specifically stating, “Any African-American actress who enters this role is forever going to be known as ‘Black Buffy,’ and that’s something I find frustrating.”

She also opines that the show will be “held to an unreasonably high standard and will be in compared in terms of writing, acting, etc. to the original, and if this show doesn’t go on to last seven seasons, it’ll just be looked at as a failed attempted (sp) to update a popular series.”

Weekes does note that she is excited for Owusu-Breen to be showrunning the show.

“For some genre writers it’s Star Wars.
Buffy the Vampire Slayer is my Star Wars.

Before I became a writer, I was a fan. For seven seasons, I watched Buffy Summers grow up, find love, kill that love. I watched her fight, and struggle and slay.

There is only one Buffy. One Xander, one Willow, Giles, Cordelia, Oz, Tara, Kendra, Faith, Spike, Angel… They can’t be replaced. Joss Whedon’s brilliant and beautiful series can’t be replicated. I wouldn’t try to.

But here we are, twenty years later…
And the world seems a lot scarier.
So maybe, it could be time to meet a new Slayer….

This makes absolutely perfect sense to me. The Slayer isn’t just Buffy Summers. She just happened to be the Vampire Slayer at that time. There have been other Slayers. There’s a whole prophecy of the Slayer indicating there are multiple Slayers.

“Into every generation, there is a chosen one. One girl in all the world. She alone will wield the strength and skill to stand against the vampires, the demons, and the forces of darkness; To stop the spread of their evil and the swell of their numbers. She is the Slayer.”

In fact, there were multiple Potential Slayers due to the Slayer’s lifespan being shortlived because of their violent nature. One of those Potential Slayer’s was Kendra Young. She would become a full Slayer when Buffy Summers died in 1997. Buffy would subsequently be revived via CPR, but her brief death saw Kendra Young’s powers activated. Kendra Young was portrayed by Bianca Jasmine Lawson, who is an African American. A black Slayer is not new to the Buffy the Vampire canon. Her character was introduced in the second season. 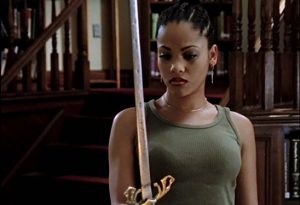 I have to wonder if Princess Weekes even watched the original Buffy the Vampire series or did any kind of basic research into the show before airing her concerns in print form.

Will you be watching the new Buffy the Vampire Slayer television show? What do you make of Monica Owusu-Breen’s statement?