Batman Beyond tells the tale of a futuristic Batman. A story that began as an extension of Batman: The Animated Series and grew into its own amazing Universe, one worthy of its own live-action film. But until DC wises up, a comic written by Dan Jurgens will do just fine.

The talented writer has been helming the Batman Beyond title since Rebirth, taking the story on awesome twists and turns with a unique spin on the original idea. It’s been a fun ride. Now, that ride is getting a new/old villain. The Joker is coming to Neo-Gotham, folks!

Thanks to the world of comic solicits, fans get a preview of comic covers a couple of months in advance. Sometimes, it leads to ridiculous spoilers; other times it can create a wonderful amount of hype and anticipation. Let’s hope that’s the case with this recently revealed cover of Batman Beyond #26. [easyazon_link identifier=”B00LNH6RT2″ locale=”US” tag=”boundingintocomics-20″]Buy it here![/easyazon_link]

Thanks to DC, here’s your first look at the Joker of Neo-Gotham! 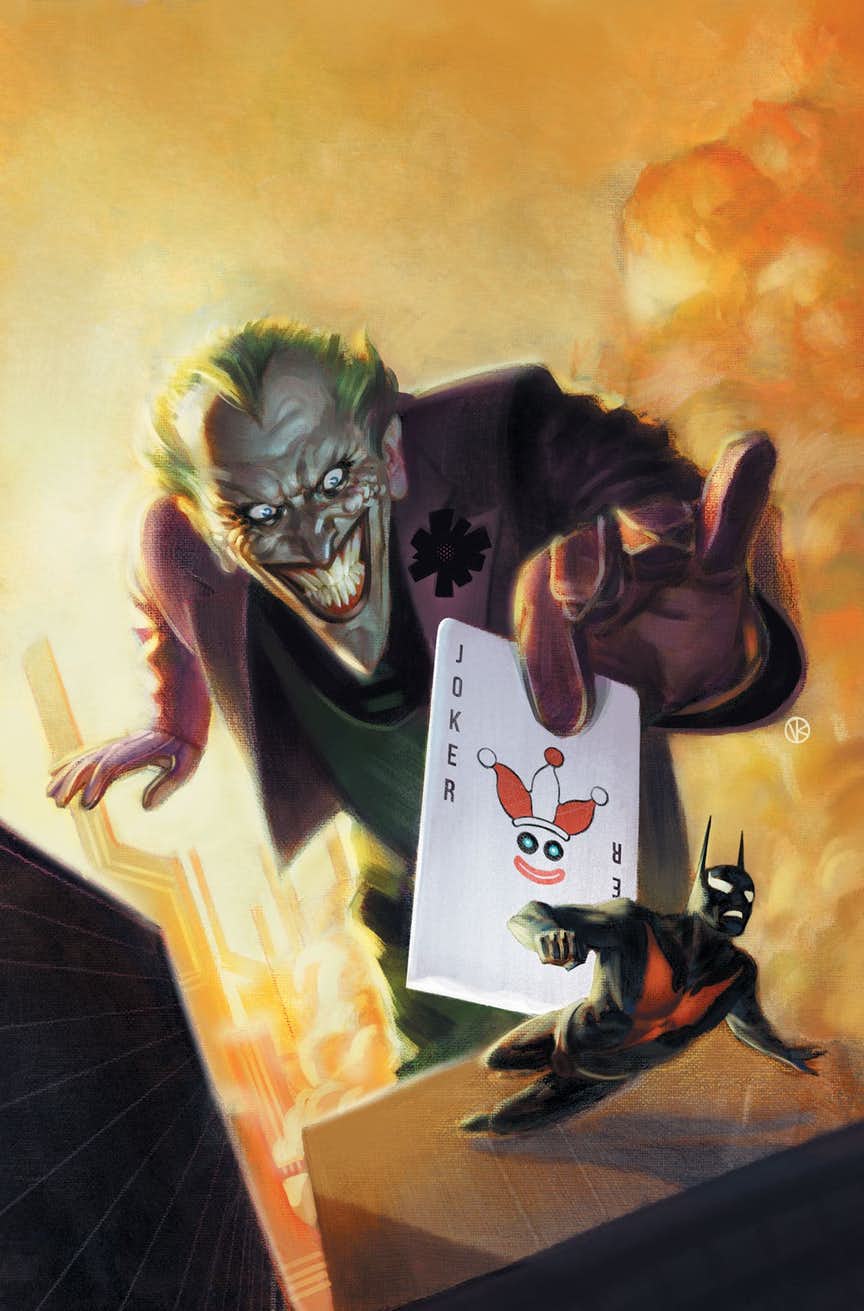 There’s a lot to dissect here. The black and purple look so good together you might miss it, and the scars… could they be a repercussion of whatever has kept this Joker alive for so long? And speaking of which, there’s no way to tell how this story will play into Geoff Johns “3 Jokers” idea. In case you didn’t know, there are currently 3 different Jokers running around the DC Universe. While there’s no way to tell precisely which one this is, or if it’s some imposter, there are a few clues.

Does that hairline look familiar? It should. It occupied the head of one of the most famous interpretations of the Joker of all time: Jack Nicholson in Batman (1989). 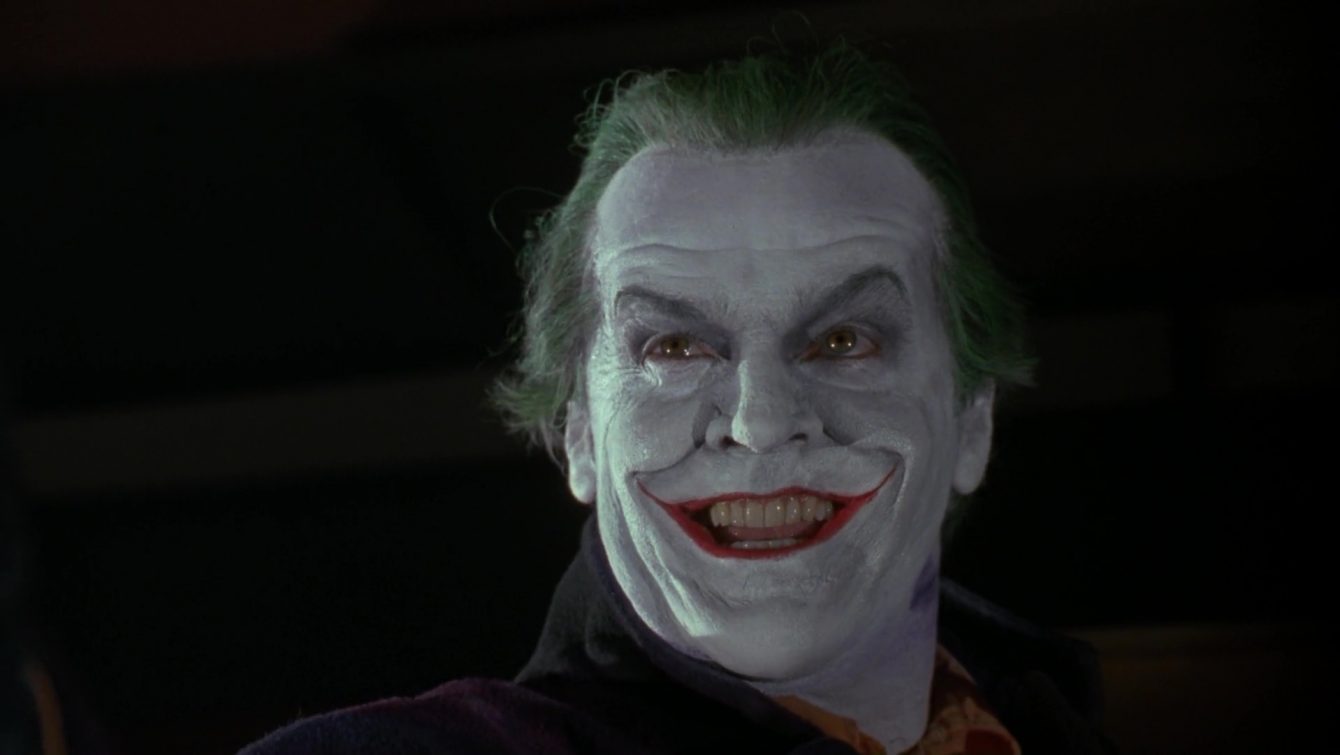 The suit also looks strikingly similar to that of Nicholson’s. With thin tie, broad and pointy shoulders, and those obvious purple gloves. While it doesn’t show his hairline, this promotional image for Batman shows off the Joker’s lavish suit. 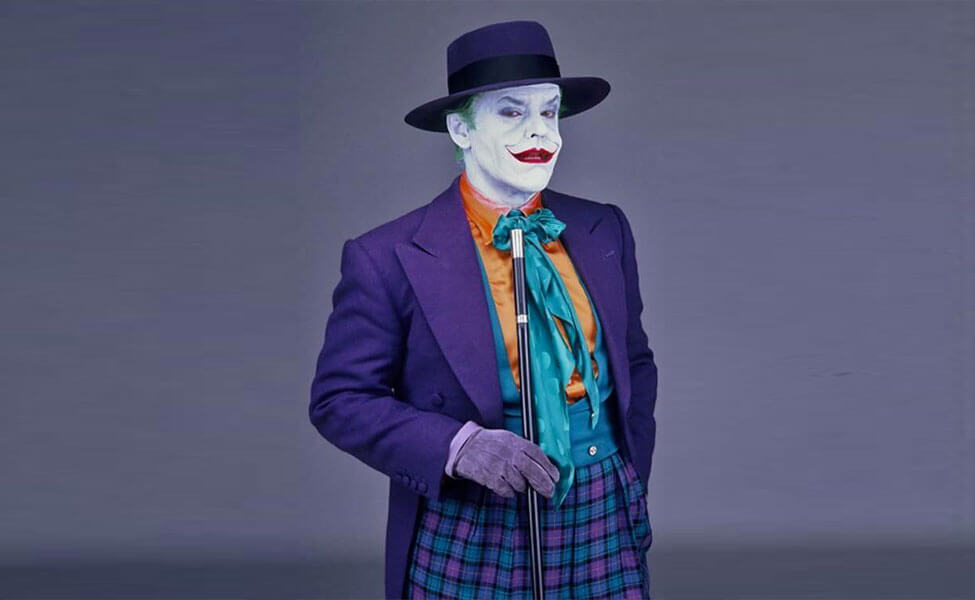 Facing the Joker will be no laughing matter for Terry McGinnis. Especially if that Joker is going to emulate one of the most vicious and ruthless versions of the character. Nicholson added much-needed gravitas and insanity to the original role. Enough to make lines like, “Have you ever danced with the devil in the pale moonlight?” so iconic. Jurgens is throwing his superheroes to the sharks by introducing a new Joker. Hopefully Terry and Matt McGinnis, otherwise known as Batman and Robin Beyond, can handle it.

The dedication of a new building commemorating a special Wayne family event—the 100th birthday of Thomas Wayne—brings out all of Neo-Gotham’s familiar faces, including one who was definitely not on the guest list. The Joker makes his long-awaited return to Neo-Gotham, and no one is safe! Will he strike at Batman, Robin, Commissioner Barbara Gordon or the original Caped Crusader himself, Bruce Wayne? Decades after his last fight with the Dark Knight, the Clown Prince of Crime returns home to take his city back once and for all.

Written by Dan Jurgens with art by Cully Hamner, the “Final Joke” arc begins on October 24th in Batman Beyond #25.