“I for one am glad to have the ‘Gambit’s size question’ finally answered.”

Before I even got a chance to read [easyazon_link identifier=”B07GH9DNQ2″ locale=”US” tag=”boundingintocomics-20″]Mr. & Mrs. X #2[/easyazon_link], I caught glimpse of a Tweet about it from writer, Kelly Thompson. Apparently, a YouTube comic book reviewer, whom I’m subscribed to, funny enough, described this issue as a chick-flick. Ms. Thompson didn’t really take to that specific account, but I might have to agree with Professor Bill, in a way. While I wouldn’t consider this a chick flick, per-say, it does truly have a cinematic feel. 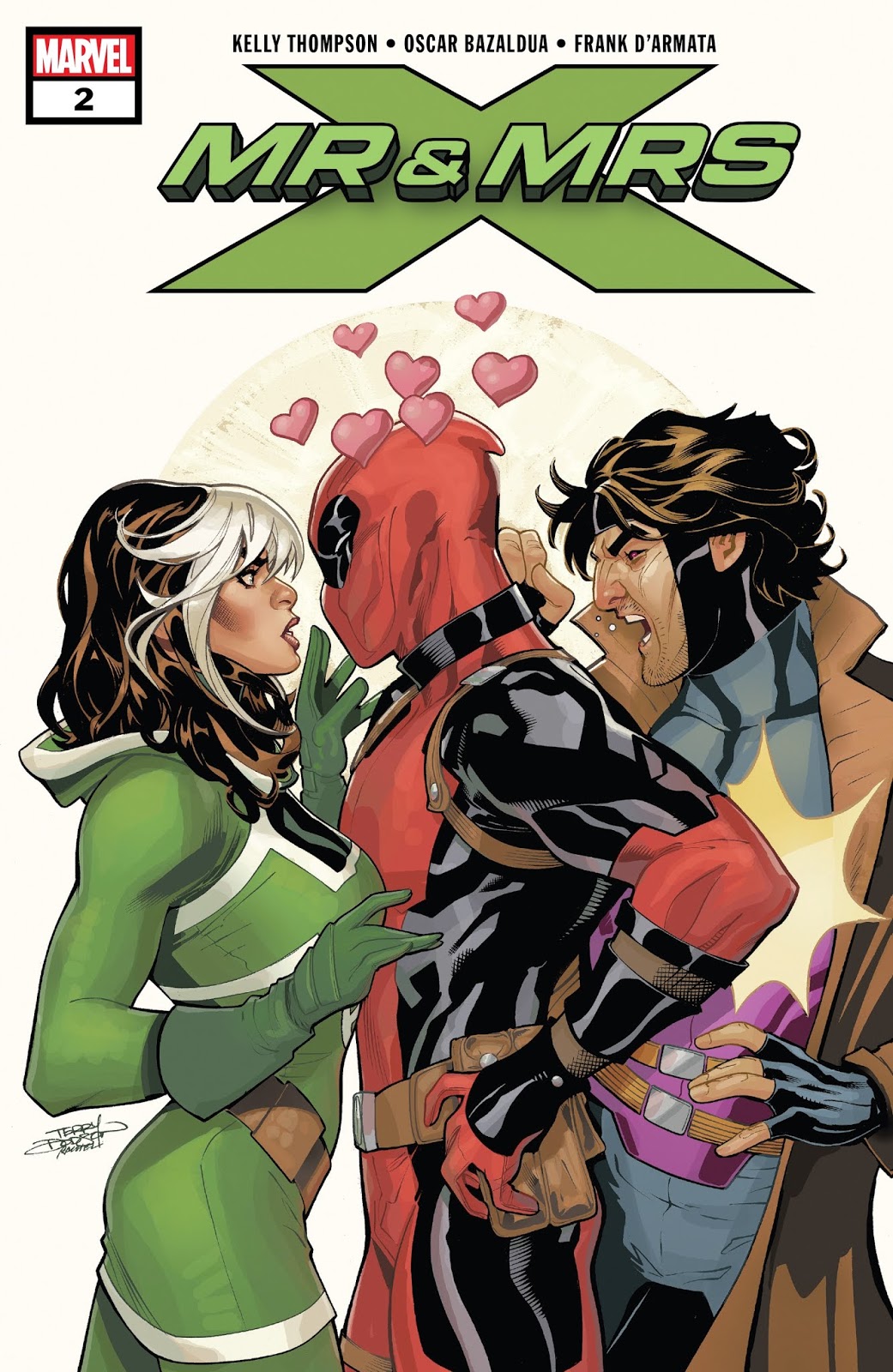 MMX #2 somehow has a different feel altogether from the debut a month ago. Mr. and Mrs. X#1 was a dope comic book. This is more like a dope act of a movie.

In comics, there’s nothing else I appreciate more than a book so rich and lush in content that it feels as if it’s moving. On this count, Oscar Bazaldua’s beautiful lines are probably as much to blame as Thompson’s script, but I’d be remiss if I did not recognize colorist, Frank D’Armata. Explosions are in no short supply with one, Remy Lebeau present, and they’re all so beautifully colored and highlighted, they jump off the page. 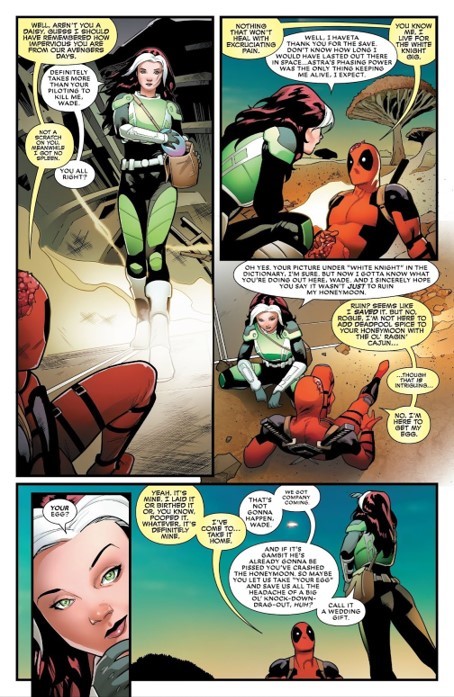 Outside of the prettiness of the book, the strongest part is, as normal, the dialogue. At times I notice the couple’s absent southern drawls, but it’s the interactions throughout the book that keep the reader entertained. And I get it. Trying to keep up with all the various dis’, yas’, ain’ts, and randomly-placed d’s can be a cumbersome task.

Let’s chat about the Merc with the Mouth. At first, Deadpool’s inclusion concerned me. He’s written in so many ways as of late, it’s difficult to figure how he’s going to react to situations. I’m pleased to say Thompson’s version of Wade is more… palatable than most. Based on the last couple of times we’ve seen him in Rogue’s presence, I expected Wade to be something of a puppy-dog, but thankfully, that’s not the case here. Kelly successfully acknowledges the history between the two but, other than some innuendo, and several well-placed indecent proposals – Wade’s all business. He even foolishly threatens the couple. I liked that. 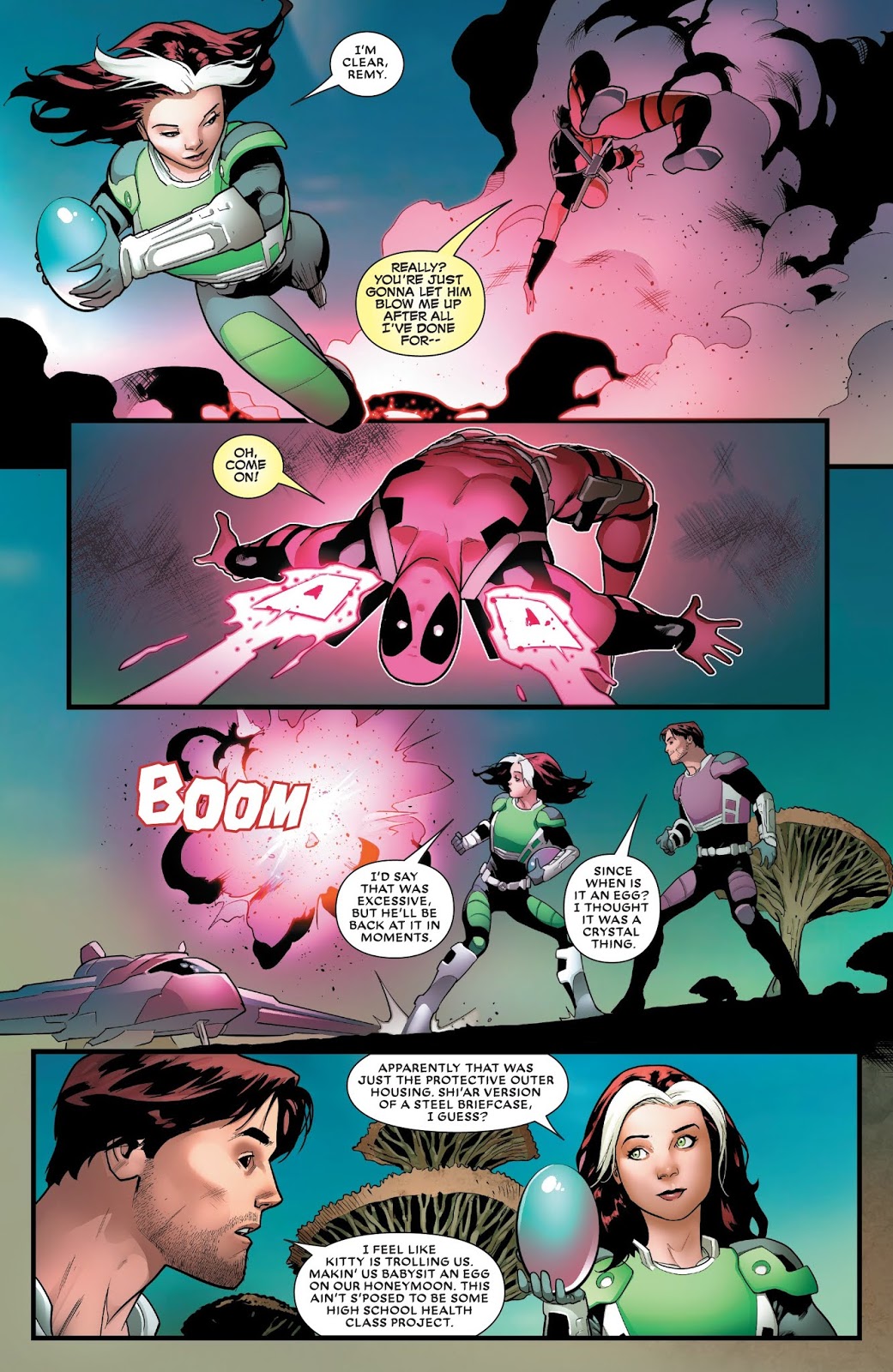 Readers that are already invested in this series won’t be let down by its second offering. Fans of Deadpool, whom in my opinion, may have been given a tad too much panel time, will get a kick out of it as well. Wade is illustrated and written to the same high standards as the rest of the book. Anyone afraid of the Mr. & Mrs. X series being nothing but a 20+ page love-fest each month will be disappointed if this issue is any indication of what to expect. It’s funny, action-packed, and a pleasure just to look at. It’s a solid read and a high recommendation. If you picked up a floppy from your local comic shop, I suggest downloading the free digital version after the first read. You’re probably going to go back a few more times.