Pokemon Go revealed trainers across the globe can now obtain the mythical Pokemon Celebi. But it won’t be an easy task obtaining this Pokemon. Much like the previously released Mew, Celebi requires trainers to complete a number of special research tasks in order to discover and capture Celebi.

While, many trainers will have to complete the special research tasks to capture Celebi, a few lucky trainers were able to capture the Pokemon during this summer’s Pokemon Go Fest.

If you are unfamiliar with Celebi, the Pokemon first appeared in Generation II or Pokemon Silver and Gold. In those games, Celebi was the guardian of the Ilex Forest. And much like in Pokemon Go, the Pokemon was only available during special events.

This new Special Research event for Celebi, A Ripple in Time, features 8 different stages with three tasks per stage. If you’re like me and still don’t have Celebi in your Pokedex, then you might like to know what’s in store for you in this series of tasks:

Stage One of Eight

And here’s a nifty chart to help you out: 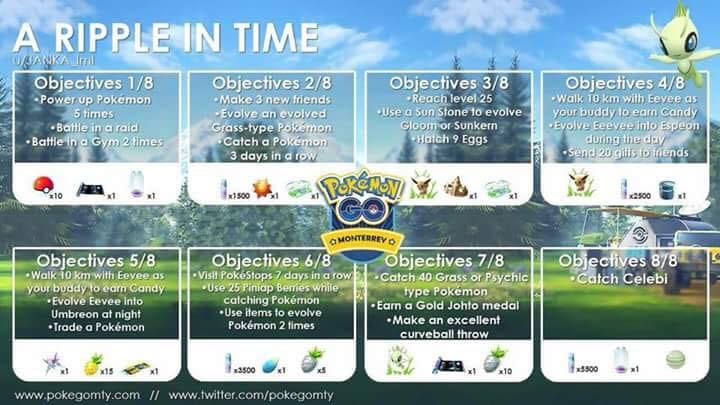 While those are the full eight research tasks that you have to complete, there are still some tricks that can help you get through these tasks.

You might also be wondering what the Gold Johto Medal is. In order to obtain this medal you need to have captured 70 Pokemon from the Johto region.

It’s great to see that Pokemon Go is still running strong. As we reported in June, Pokemon Go will expand even further as it will connect with the Nintendo Switch later this year. Nintendo will introduce Pokemon Let’s Go Eevee and Pikachu which will allow players to continue their journey on the console.

Do you think you have what it takes to complete all of these tasks and add the mythical Celebi to your Pokedex?