The world of Alt-Hero continues to grow and expand in issue #4 from writer Vox Day and Arkhaven Comics. In what is probably my favorite aspect of this book, we get to finally return to Europe and catch up with what’s going on across the pond for the first time since issue #1. While the larger universe has continued to evolve with other comics titles, I was excited to get back to the setting and characters that set us off on this journey in the first place. So, was it the triumphant return that I had been hoping for? Well… I think that it may very well be the start of one.

So let me start off by saying that this issue seems that it would have been a great first half of a longer comic. While that is essentially what it is since every issue of a comic is simply one cog in a larger wheel, I still couldn’t help but want more from this issue. A fourth issue in a series shouldn’t need a lot of exposition and set up, but this one did since we haven’t seen this side of the universe in several months. There was an awful lot of characters sitting around and talking; basically breaking down the story so that the audience would remain up to speed. It’s a necessary evil with almost all comic books, but there is so much going on in this universe that it’s easy to get lost in the exposition and forget what’s what. 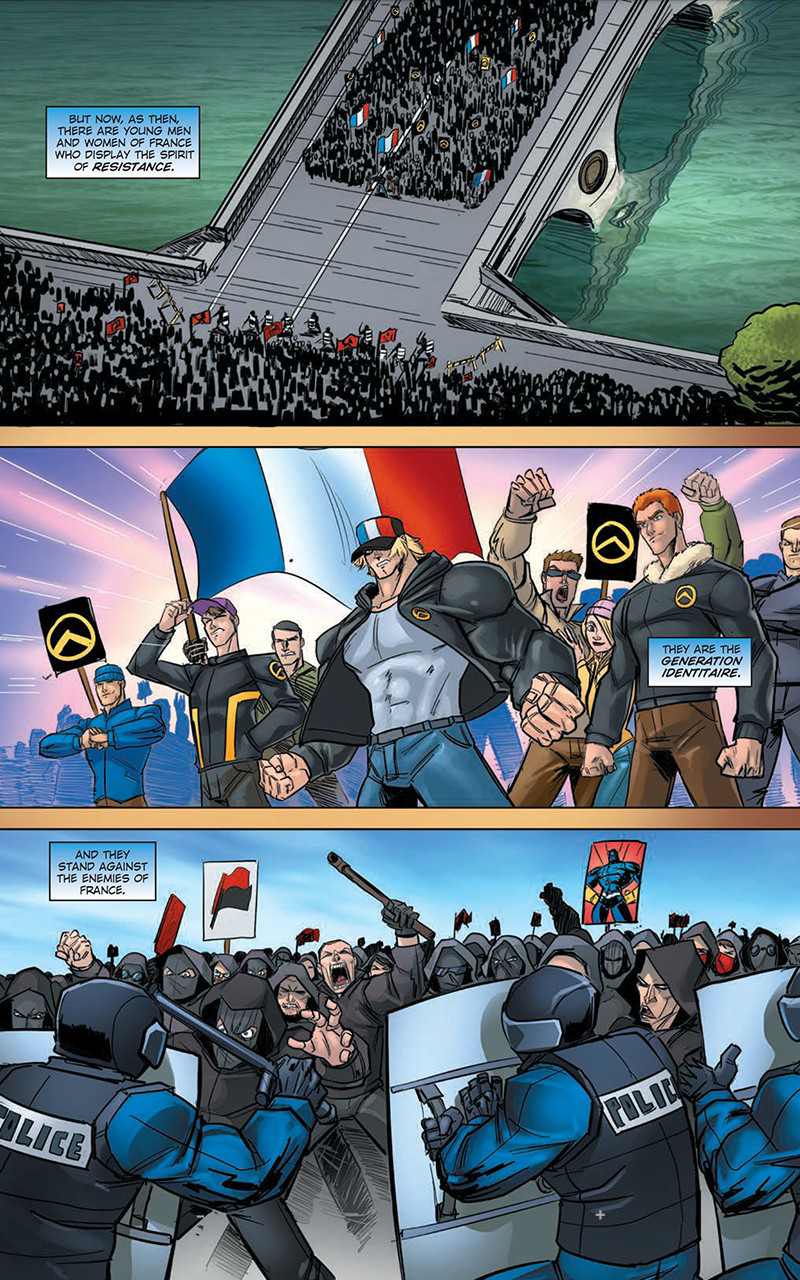 There’s also the problem of having too many characters to keep track of. There were a lot of great heroes introduced in issue #1, but we only got to spend a fleeting few moments with them before they were gone from the page. [easyazon_link identifier=”B07H1WGYKG” locale=”US” tag=”boundingintocomics-20″]Alt-Hero #4[/easyazon_link] does not reintroduce us to any of those characters, but it does bring in even MORE heroes for us to quickly get to know. Add to that all the disparate government agencies, annoying Antifa mobs, and mysterious, rogue groups of rebels, and I found myself experiencing a bit of an overload. Some people my dig it, but I feel that the creative team may be trying to cram too much in too quickly.

That being said, the story and the world still remains interesting and engaging. It is, for better or worse, a hyper-realistic mirror into our own fractured culture and that will either excite people, or turn them off. Whatever side of the current cultural debate you happen to be on, we all have differing opinions on how much cultural and political issues we like in our comics. Where you stand on that will ultimately dictate how much you enjoy Alt-Hero, but if you like it or don’t mind it, then you should be able to appreciate how deep and interesting this world is shaping up to be.

Captain Europa continues to be an impressive presence in the world and his interaction with the other heroes, government agencies, and Antifa members give his personality the depth it needs to make him an interesting presence, whether or not you love him or hate him.

The other new characters are interesting, but as is usual with this series, you do not get a whole lot of time with them. It will also be interesting to see how these new heroes, as well as the others from the first issue, ultimately decide to respond to their agency’s interaction with the public; specifically their apparent support of groups like Antifa. It plants plenty of seeds for what promises to be an interesting turn of events in future issues, but as I said, this issue seemed a little incomplete on its own. 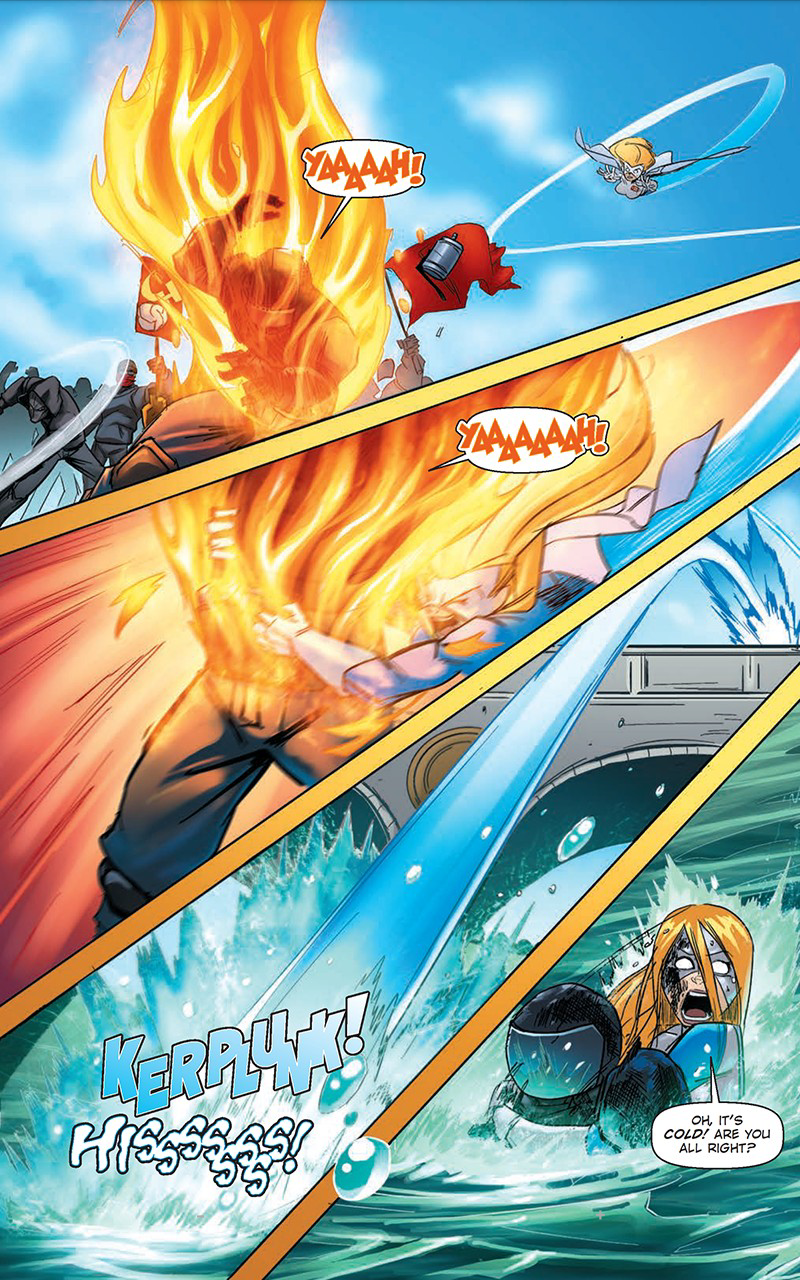 The final pages offered some fun action and a great fight between a couple of characters, but I felt as if it ended right when I was becoming interested in the goings on. I enjoyed the turn of events and the drama that ensued; I just wished there hadn’t been so much of a slog to get there in the first place. However, the job of an on-going comic is to not only entertain, but to leave you wanting more, and in that respect, Alt-Hero #4 succeeds.

The artwork has also improved dramatically, especially as compared to issue #1. The characters look much better and move and emote much more like they should. Facial models are also much better and that uncanny valley they were lingering in seems to have been properly leaped over. I also appreciate the way that Cliff Cosmic has framed the action in this issue. There are some full-page action shots and they look wonderful and do a fantastic job of capturing the chaotic action. I’d also like to point out the hilarious character models of some of the Antifa members.

While I did enjoy [easyazon_link identifier=”B07H1WGYKG” locale=”US” tag=”boundingintocomics-20″]Alt-Hero #4[/easyazon_link], it is easily my least favorite of this series so far. The ending was strong and left me wanting more, but there is simply too much going on and too many players popping in and out for me to not feel overwhelmed and distracted. On a whole though, The Alt-Hero universe continues to grow and deepen in a way that makes me want to keep coming back for more. I’m eagerly waiting to see all the explosive events come to a head and see what side of the line these characters end up falling on. If there are a few rough spots along the way (i.e. this issue) then so be it.