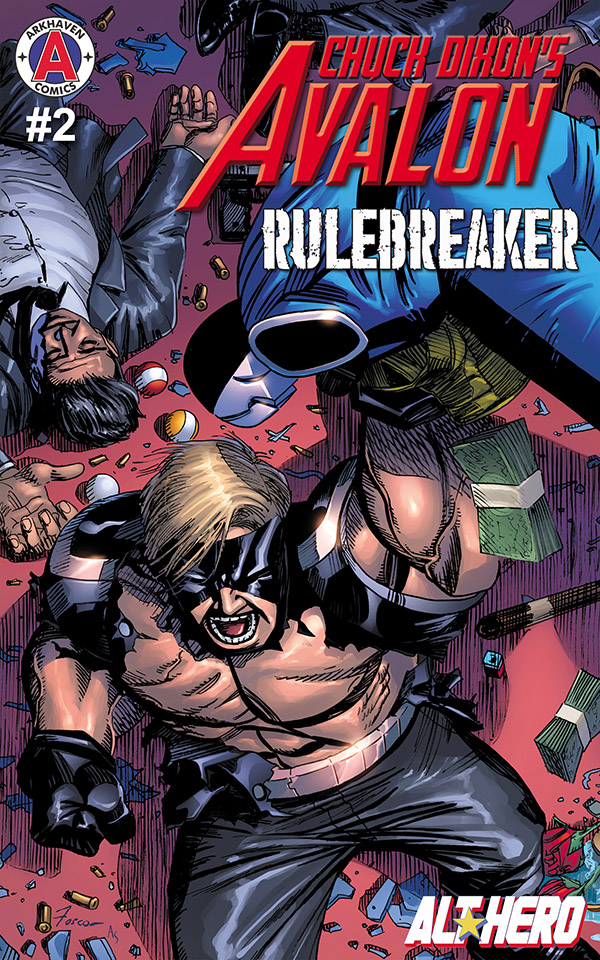 If you are unfamiliar with Avalon, the series features the crime-fighting duo of King Ace and Fazer. The story takes place within the Alt-Hero universe in the city of Avalon. The city has quite a bit of problems especially with a number of “specials” running around who might help you out, for a price. It can make life tough for the average citizen.

Fortunately, the city is home to King Ace and Fazer who do their best to be true heroes. They don’t demand payment for their good deeds and they don’t kill anyone, ever. Their goal is to make everyday life better for everyone. However, even heroes face temptations.

We spoke with Chuck Dixon about Avalon back in February about the series:

“King and Fazer are just a part of a larger ensemble cast of super-powered heroes and outlaws. To say King and Fazer’s relationship is complicated is an understatement. King Ace is a kind of Superman type, a big beefcake who’s bullet-resistant, super-strong and can leap long distances. Fazer has the ability to pass through solid objects. They’re powers complement one another even though their personalities are very much at odds.

But the true star of the book is the city of Avalon itself. It’s an east coast town that’s seen better days and getting rather tired of being ground zero for super-fights between good guys and bad guys.”

“Avalon is a great first issue that introduces us to a fascinating group of super-powered individuals who are struggling with their own strengths and weaknesses. The conflicts that will eventually play out are worth being excited for and it’s a great bit of writing and world building overall that allow us to feel as if we’re already familiar with this universe, even as we’re only just introduced to it. You can feel safe in being excited for this one, folks.”