Because the system is using a dictionary derived from several EA games based on some sort of AI learning algorithm that has tagged certain combinations of words to be escalators to toxic chat (or similar, I don’t claim to understand how it works in detail) – we will change this.

However, Sirland’s explanation doesn’t add up. If it was really word combinations that could be “escalators to toxic chat” why is the term “Free DLC” not banned from the chat, but “DLC” is. As a matter of fact, how in the word is the term “DLC” leading to “toxic chat.”

Not only are non-negative words getting das boot, but also terms that are historical to the World War II time period [easyazon_link identifier=”B07DMGBZ39″ locale=”US” tag=”boundingintocomics-20″]Battlefield V[/easyazon_link] is set in. If you happened to be talking about Nazi troop movements your going to get censored for using that “Nazi” word.

You can see how they’ve censored “white man,” “DLC,” and “Nazi” below:

As One Angry Gamer points out, it’s also not just the chat filter where terms like “white man” are being censored. EA/DICE is not allowing users to identify as “white man” when logging into their EA Origin account. 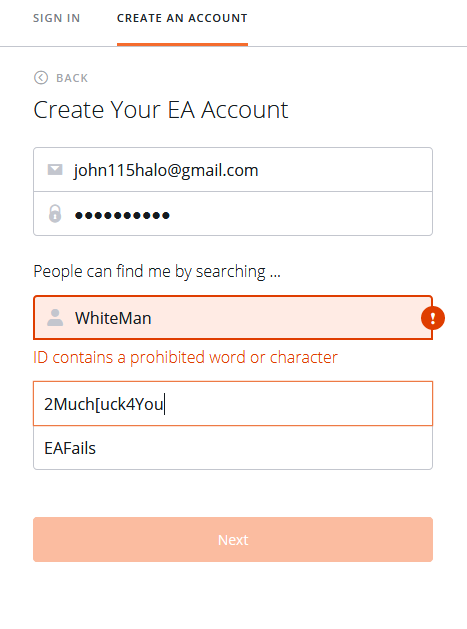 EA/DICE and Sirland have a lot of explaining too. They need to specifically explain how this chat filter works and why innocent phrases like “white man” and “DLC” are being censored. What qualifies these words as “toxic?” And how does the algorithm determine what is “toxic?”

And this isn’t the only problem Battlefield V has had in recent months. The game has been mired in controversy. It began at E3 where they released a trailer for the game that saw plenty of potential consumers and fans decry the game for its lack of historical accuracy. In response, their former Chief Creative Officer insulted those fans and consumers and even told them not to buy the game.

Shortly after this response, a report came out indicating that Battlefield V’s presales never left the base. The report indicated Battlefield V would be the big loser among this year’s AAA releases which include [easyazon_link identifier=”B07DQ9PW4C” locale=”US” tag=”boundingintocomics-20″]Red Dead Redemption 2[/easyazon_link] and [easyazon_link identifier=”B072MKR1RL” locale=”US” tag=”boundingintocomics-20″]Call of Duty: Black Ops 4[/easyazon_link]. In response, EA/DICE moved the release date of the game back a month claiming they were going to make a number of fixes to the game.

To add to the problems, the actual game might be subpar as Angry Joe fears it will have a lack of content when it releases in November.

[easyazon_link identifier=”B07DMGBZ39″ locale=”US” tag=”boundingintocomics-20″]Battlefield V[/easyazon_link] will be released November 20th on PS4, X-Box One and PC.