The upcoming Hellboy movie from Summit Entertainment has pushed back its release date three months.

The film’s Twitter page updated their description to read, “#Hellboy – Coming to theaters April 12, 2019. Based on the graphic novels by Mike Mignola.” 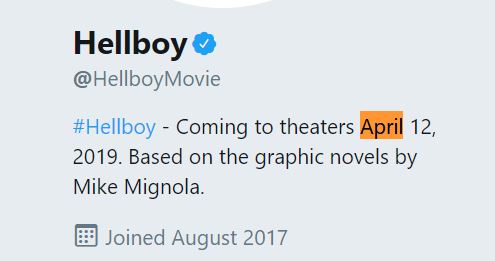 The film had previously been scheduled for a January 11, 2019 release date. There is no reason as to why the film was moved back.

With its new release date, Hellboy will drop a week after DC Films’ Shazam! movie starring Zachary Levi. It will open against The Voyage of Doctor Dolittle starring Robert Downey Jr., and Breakthrough starring Topher Grace.

It’s more than likely there will be some big news dropping about Hellboy in the next few weeks at New York Comic Con. A number of the cast and crew are expected to be on hand for the convention including stars David Harbour, Daniel Dae Kim, Ian McShane, and Sasha Lane. Hellboy creator Mike Mignola is also expected to be on hand.

ICYMI – The cast of #Hellboy is heading to #NYCC! ? Don’t miss our panel on Saturday, October 6 at 11am-12pm on the main stage! pic.twitter.com/v6aHqfCWAN

It’s more than likely they could drop the first trailer at New York Comic Con. I also wouldn’t be surprised if Milla Jovovich who has been cast as the main villain, the Blood Queen, will also make a surprise appearance.

The film is rumored to follow Mignola’s “[easyazon_link identifier=”1506706681″ locale=”US” tag=”boundingintocomics-20″]The Wild Hunt[/easyazon_link]” story line that will see Hellboy come face to face with witch Nimue the Blood Queen. Hellboy will have to go on an epic quest to find the legendary sword Excalibur. WHile on his journey Hellboy will have to face his own inner demons and the prophecy that he is destined to bring hellfire to Earth. It’s quite possible that taking control of Excalibur could fulfill that prophecy.