Marvel Comics writer Mark Waid, who is currently penning Doctor Strange, responded to news that he’s being sued by Diversity & Comics aka Richard Meyer for tortious interference and defamation.

On Facebook, Waid would confirm he is being represented by Mark S. Zaid.

“Yes, I have a lawyer named Mark S. Zaid. I’ve heard all the jokes. HiLARious. (sic) Mine is that I went to him after Mark Xaid was busy and Mark Yaid was tied up.

Oh, and also because he’s a brilliant lawyer. Go do a Google or YouTube search on the guy and prepare to have your hair blown back.

I am legitimately overwhelmed and humbled by the outpouring of support from all of you I’ve received these last two days. I’ve thanked as many of you personally as I have time to, and I’ll keep making time, but at the moment you’re outpacing me.

Unfortunately but obviously, there’s little if anything I can say about the actual lawsuit in a public forum at this time, so that’s my only statement, but I didn’t want anyone’s support to pass unrecognized. Thank you, each and every one of you. For those of you who believe in me, I promise neither I nor the actual facts will let you down. 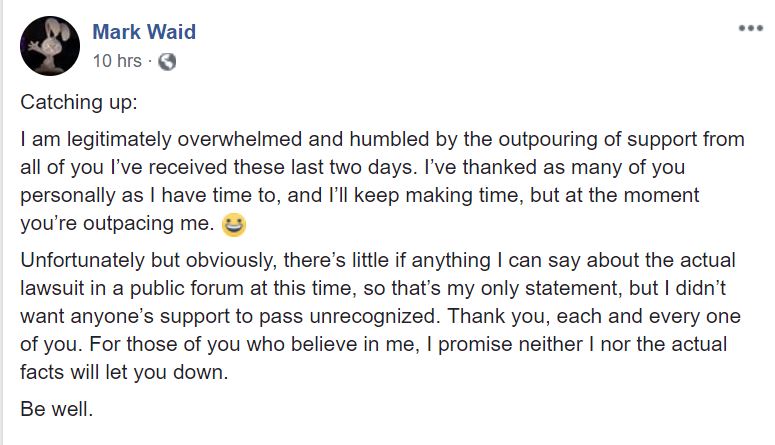 Waid’s latest response comes after a number comic book professionals took to Twitter to start the #IStandWithMarkWaid hashtag. A counter hashtag, #IStandWithYaBoiZack has since been started for Diversity & Comics aka Richard Meyer aka Zack.

#IStandWithYaBoiZack against these whacko lying SJWs who defiantly stand against his (and your) right to write, draw, read, publish, sell & buy comics free from their bullshit propaganda.

You don’t want to hear their crap for FREE, much less pay rising cover prices for it. ?

I *cough* #IStandWithYaBoiZack
Been watching him for over a year and haven't seen or heard an ounce of racism, bigotry, sexism and whatever elsthey accuse him of… a lot of cringe, but nothing derogatory

Because comics are for everyone.

#IStandWithYaBoiZack Go get him, lad!

#IStandWithYaBoiZack
This comic culture war has to end. This bullying of the little guy has to end. I stand with accountability, ethics and honor, or some shit.

#IStandWithYaBoiZack because Mark Waid must he stopped!

I was gonna used Mera from Akame Ga Kill Zero just to troll the idiots of #IStandWithMarkWaid but I decided to Raynare From HIghschool DXD instead .#ComicsGate #IStandWithYaBoiZack #MarkWaidIsACryBully pic.twitter.com/cD21p5nlDI

We didn't land on #comicsgate,
Comicsgate landed on US! ✊✊ #IStandWithYaBoiZack

What do you make of Waid’s response and fans’ response to the pros hashtag?