In a recent Polygon interview, legendary horror film producer Jason Blum sat down with Polygon Senior Entertainment Editor Matt Patches to discuss Blum’s upcoming Halloween sequel. The interview discusses numerous topics, ranging from Blum’s admiration for his directors to his reasoning for making a proper Halloween sequel. At one point in the interview, Patches inquires about the presence of female horror directors at Blumhouse Productions.

Blum responds, “We’re always trying to [do] that. We’re not trying to do it because of recent events. We’ve always been trying.”

Patches goes on to explain that Blum and Blumhouse has hired a number of female directors:

“Blumhouse has produced films directed by women, though none could be easily classified as horror in the ilk of your Ouijas or Happy Death Days: In 2013, Blumhouse produced and released Twilight director Catherine Hardwicke’s erotic thriller Plush all but went straight to video; Karen Moncrieff’s supernatural drama The Keeping Hours trickled out on to DVD this past August; Blum notes that the company just wrapped production on The Killing creator Veena Sud’s The Lie, though he also admits the film is “squarely in the thriller genre.” On the TV side, Blumhouse produced Marti Noxon’s adaptation of Sharp Objects, directed by Jean-Marc Vallée for HBO. While terrifying in its own right, Blum wouldn’t call the mini-series “horror” either.”

He would then include another quote from Blum:

“There are not a lot of female directors period, and even less who are inclined to do horror. I’m a massive admirer of [The Babadook director] Jennifer Kent. I’ve offered her every movie we’ve had available. She’s turned me down every time.”

These responses from Blum were, predictably, met with massive criticism and accusations of sexism from fans: 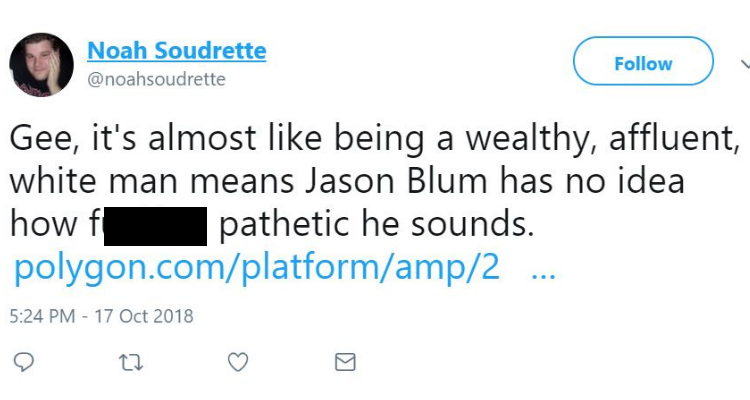 This Convo blows Jason Blum is trying to keep his club men only it’s terrible.

There’s so many female filmmakers out there that I’m shocked Jason Blum can be arrogant and stupid enough to blindly say there aren’t many.

However, these reactions are based on a misconstrued and twisted version of Blum’s quote. As John Squires (Editor-in-Chief of Bloody Disgusting) points out:

A whole lot of people seem to be glossing over the fact that Jason Blum actually *has* hired a handful of female filmmakers.

But don’t let the facts get in the way of the outrage.

(That said, MORE would always be better!) pic.twitter.com/cpNGm3Q06N

It is true that Blumhouse productions has not produced many female-directed horror films. In fact, it has produced only one: [easyazon_link identifier=”B07FS4H6PL” locale=”US” tag=”boundingintocomics-20″]The Keeping Hours[/easyazon_link], directed by Karen Moncrieff, but this is not a result of misogyny or sexism. In the same article an anecdote is shared wherein Blum, attempting to recall a specific female director that he has offered projects to, lists off numerous female directors that he has previously been in contact with:

During our call, there’s another name Blum struggles to recall — a woman to whom he’s thrown projects left and right — but he’s so driven to figure out the name that, in a true Hollywood move, he summons an assistant, then later a Blumhouse exec, onto the phone to help him remember.

“Who was the woman that we met with a bunch of times on the movie that we have at Sony?!” His associates rattle off names: Karyn Kusama? Mimi Leder? Zoe Lister-Jones? Sarah Gertrude Shapiro? Katie Aselton? Lynne Ramsey? (“No, she wouldn’t touch this with a 10-foot pole,” says Blum’s exec colleague.) The Blumhouse Rolodex runs deep.

When Blum and his team do recall the name, Blum informs Patches that the female director in question had continually turned down his offers:

Eventually Blum and his team land on the name: Leigh Janiak, who directed the SXSW-dominating Honeymoon in 2014. According to Blum, Blumhouse offered her every project under the sun, but nothing panned out. (Janiak, writing in a follow-up, confirms the meetings, and adds that scheduling prevented her from signing on for a Blumhouse movie, but that she’s confident “we’ll work together on something, someday soon.”)

While Blum did seek out Leigh Janiak, as with the aforementioned Lynne Ramsey and Jennifer Kent, he unfortunately was met with numerous rejections of his proposals. It is clearly evidenced that Blum has been working to promote female voices and viewpoints in the films produced by Blumhouse Productions. Female directors turning down his offers has been distorted into unfairly lobbied accusations of sexism against Blum.

In a positive response to Blum’s comments, many fans began to promote and call attention to the multitude of female horror directors, many of whom are lesser known than their big budget Hollywood counterparts. Tweets directed at Blum by fans promoted talented contemporary female directors such as Alice Lowe (Prevenge), Julia Ducournau (Raw), and Hélène Cattet (The ABCs of Death). Many female directors personally began to tweet about the situation in an attempt to raise awareness of the many talented female horror directors in the industry, such as Jennifer Reeder (Knives and Skin), Axelle Carolyn (Soulmate), and Jill Gevargizian (The Stylist), leading to many new fans being exposed to their works. A prominent database, Cut-Throat Women, also began to be circulated, leading many fans to discover an entire catalogue of female directors, producers, screenwriters, and even female-specific film festivals.

Following the backlash to his comments, Jason Blum spoke to Variety during the red carpet premiere of Halloween, clarifying his statements:

“I totally misspoke.I made a mistake about it. Our audience is 55% women, the executives at the company we have are 50% women. I am passionate about hiring women, and I totally made a mistake in the way I represented that. We already work with a lot of women.”

“Chelsea Stardust, who is my old assistant, I financed her first movie, but I would like to work with more. Today was a great day for me because I learned a lot and because there are a lot of women out there that I’m going to meet as a result of today so I’m grateful for it.”

Blum also posted an apology to his personal Twitter page: