Earlier this year then-social media specialist for GOG.com, Sean Halliday, came under fire for his use of a Transgender activism hashtag in a humorous tweet. Halliday had used the hashtag #WontBeErased, which sparked a wave of outrage accusing Halliday and GOG of being transphobic and bigoted which ultimately resulted in Halliday being let go from the company. 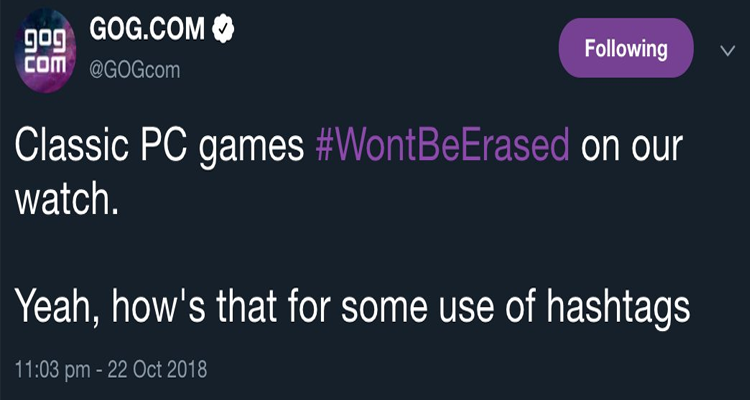 This tweet was considered by many to be highly transphobic. At the time, Halliday states that he did not know of the actual meaning behind the hashtag, but merely saw that it was trending. This tweet led to Halliday being let go from GOG.

Following this career upset, Halliday soon found employment at the newly announced Exclusively Games. This website, created by Jeremy “TheQuartering” Hambly and currently in the final stages of an initial crowdfunding campaign, aims “to create a place for fans of escapism. This website will provide a forum, videos and articles covering topics related to just about everything gaming with just one rule, NO POLITICS! We’ll cover video games, coin-op, retro, card games, tabletop games & everything in between.” Hambly had previously tweeted that after speaking with Halliday, he would like to offer him a position at Exclusively Games. This desire became reality when Halliday was announced as the community manager for Exclusively Games (Linko is the screenname used by Halliday).

Spoke To Linko (the man wrongly fired by GOG & CDProjekt Red In My Opinion) I plan to make him an offer to join my team, to help Discord, My Social Stuff & Work On Managing A new community I am working on (that i’ve eluded to) If the $$$ doesn’t work I have leads for him too.

Following the announcement of Halliday as community manager and the publishing of an in-depth interview with Eurogamer, websites such as Kotaku and PC Game Insider rushed to publish articles not only detailing Halliday’s reasons for being fired from GOG, but also to erroneously link Halliday to the GamerGate movement. Kotaku in particular points to two different editorials written by Halliday in the past concerning Anita Sarkeesian and a shift in sensibilities within the video game industry. Though these articles do not specifically name the GamerGate movement and Halliday denies any association with the internet movement in his interview with Eurogamer, Kotaku points to these works as evidence of secret bigotry.

In the scramble to be the first to comment upon a story, internet culture website The Daily Dot further damaged Halliday’s reputation and credibility by tweeting out a link to their story concerning Halliday alongside an image of a man who was currently being sought by law enforcement due to ‘failure to comply’.

Here is the ORIGINAL image that the @dailydot used to smear Sean. Using a wanted criminals mugshot to smear a guy who accidentally misused a hashtag. They STILL have not updated it or acknowledged the issue. Meanwhile we’re close to 2,000 total backers! https://t.co/f6pC0OfaEM pic.twitter.com/fSyhurlnpQ

To their credit, The Daily Dot quickly deleted the tweet and replied to Hambly’s tweet with an apology, claiming that the use of the image was not intentional, but accidental:

We used this image on accident on Twitter. The story has the correct image. Sorry about its misrepresentation and thanks for raising it.

As of writing, The Daily Dot has not sent out a second tweet concerning the Halliday story, but the article itself remains live on their webpage. As of December 8th, Eurogamer reports that Halliday has since turned down the community manager position offer from Hambly.

Whether a genuine accident or an underhanded ploy to further ruin a man’s reputation, the damage as a result of the mistaken tweet has already been done. The article itself reads as nothing more than a hit piece, with author Ana Valens claiming that Halliday’s “viewpoints fall eerily in line with Gamergate’s beliefs” and his “association with a Gamergate-adjacent site is a glaring omission [from the Eurogamer piece]”, despite presenting no evidence at worst and highly circumstantial evidence at best. The association of Halliday’s name with the words of a hit piece and the mug shot of a wanted criminal, even if purely accidental, does nothing but stoke the flames of division and sensationalist reporting.