On January 2nd Abhay Khosla, creator of Twist Street Comics, posted a piece to his tumblr blog alleging that Batman and Mister Miracle author Tom King lied about his former position as an officer of the United States Central Intelligence Agency (CIA).

Khosla first called into question King’s history due to said history being a focal point in numerous promotions for King’s works:

What struck me as a little daffy at that time about the DC Rebirth hype was that it wasn’t trumpeting King as a wordsmith with a track record of praised books under his belt. King had a respectable reputation at that point, books received with some polite applause, a critical mass that they could’ve focused on.

But instead of focusing on any of that, the announcement was instead that “King will be using his experience in counter-terrorism to bring new threats to Gotham.”

And so King mentioned his CIA credentials often. It was part of his whole sales pitch to comic fans – it was why he was qualified to write about their favorite heroes.

But as I was reading all this hype about how Tom King’s past in the CIA had prepared him to write Batman comics, I found myself asking myself a pretty simple question:

Did I really believe that Tom King was an actual CIA agent?

King’s CIA credentials were a very focal point of marketing for his The Sheriff of Babylon series and his run on Batman for DC Comics. News sites such as Newsarama, Comicbook.com, The Hollywood Reporter, The Washington Post, and GQ spoke of King’s CIA history and how it might inform his comic book writing.

For example, in a previous interview with Comicbook.com, King stated the following after being asked by his interviewer “how much of this draws on your espionage background” :

“Well, this is the first comic that I’m actually submitting to the CIA, so every page has been approved by the Agency to make sure I’m not going over any lines. This one really draws from a lot of personal experience of what I did. I was there for about five months, and I only write about the time I was there. I can’t write about the classified stuff — what I did as a CIA officer. But what I can do is write about that background and try to give you what the heat felt like, what the dirt felt like, what the danger felt like, and try to get all of those little details into this book.”

Khosla’s biggest piece of evidence in favor of King falsifying his history appears to be a letter received by Khosla after requesting information regarding King’s service from the CIA:

I prepared a letter, and I faxed it into the CIA.  I did it for the only reason really worth doing anything– I thought it’d make for a good goof for my prestigious tumblr blog.

I certainly didn’t expect the CIA to write back!

Then, the CIA wrote back:

You kind of do a little ”am I on camera?  Is this a Jamie Kennedy experiment?“ move before opening an envelope that has “The CIA” on it, too, which is great fun.  All in all, I recommend having the experience.

“We do not have a record of the individual.”

There had been news articles.  News articles about how he was in the CIA! Actual journalists had looked at this– not just schlocky commentariat that the Very Serious Comic Fans on the internet frowned upon.  Real, entertainment journalists– the kind that write recaps of TV shows! 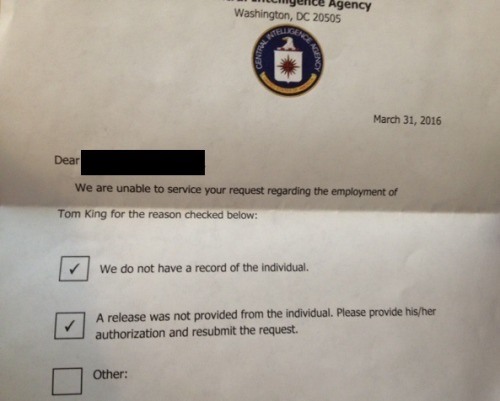 The letter Khosla claims to have received in response to his request for information regarding King’s service.

Though by Khosla’s own admission later in the piece, the letter from the CIA is not a strong or conclusive piece of evidence:

Is this letter I received from the CIA three years ago evidence of… anything, really?

The answer is obviously no.

Khosla also notes near the end of his piece that:

And so once this gets properly snope-d, (*if* that should happen… shrugs confusedly), it’s more likely than not that

In the United States, false use of military decorations, awards, or medals with the intention of receiving tangible benefits is an illegal act under The Stolen Valor Act of 2013. Sentences for those found guilty of stolen valor range from a $1,000 fine to a third-degree misdemeanor.

Khosla points to past controversies regarding falsified military histories, such as Stormwatch: Team Achilles writer Micah Ian Wright lying about his service as an Army Ranger and Marvel Editor-In-Chief C.B. Cebulski posing as a Japanese man despite being a white man (complete with an expansive backstory) during his early career as justification for his skepticism.

King himself later took to his personal Twitter account to prove that Khosla’s allegations were completely false, posting a picture of himself holding a rifle in Iraq in 2004 alongside a photo of an e-mail correspondence regarding a review of material King had with the CIA when King was writing The Sheriff of Babylon:

There’s a post going around questioning whether I served in the CIA. Which is odd, cause I did, and there’s a way for employers (like DC) to check. Anyway, here’s a picture of me in Iraq in ‘04 and an email from when I was getting Sheriff reviewed by the agency. pic.twitter.com/agvztmTJrn

King also states that Khosla never reached out to him for comment prior to his publishing of the piece.

In a second tweet, King presented his final thoughts on the topic with a message from his wife, Colleen King:

My wife has, for the first time, requested that she be quoted directly on this feed. As such, my wife, Colleen:

“Tell those assholes to call me and ask me what it was like worrying every day that you’d get shot. You served your country. Fuck those fuckers.”