Mignogna, who voiced Broly in Dragon Ball Super: Broly, did not have his name credited on the iTunes’ listing of the film.

YouTuber and lawyer Nick Rekieta, who also set up a GoFundMe for Vic Mignogna’s legal team, spotted the removal and brought it to the attention of Funimation. Mignogna has been at the center of sexual misconduct allegations that have seen him fired from Rooster Teeth and Funimation.

Wait a minute? Did @iTunes remove @vicmignogna from #DragonBallSuperBroly credits or did @FUNimation ?

I HOPE that didn’t violate some contractual agreement… pic.twitter.com/w2BrZiIGD1

Funimation would respond explaining Mignogna’s name not appearing is “an error on the iTunes listing.” They then point to the Best Buy listing which has Mignogna properly credited. They also note, “We are working to get the iTunes listing fixed.”

Hey there, Nick. Thanks for spotting this for us.

This is an error on the iTunes listing. He is appropriately listed on other retailers (here is Best Buy’s listing, for example: https://t.co/fzHUoLiQsw).

We are working to get the iTunes listing fixed.

Wonderful. Now if you could get the same thing done for google play with FMA, that would be grand.https://t.co/19y1fOHtne

A little further clarification: We have not had the rights to Fullmetal Alchemist (or the movie mentioned in this video) since 2016.

They would clarify that they have The Sacred Star of Milos available to purchase on their website, but they do not have the rights for the TV and Fullmetal Alchemist The Movie – Conqueror of Shamballa.

Yep! We do have the home video for that one movie available on our shop. However, for the TV series and Fullmetal Alchemist The Movie – Conqueror of Shamballa, the rights expired in 2016. Here’s the blog we posted back then regarding this: https://t.co/czrdInv8V4

Rekieta would thank Funimation for responding while also pointing out the problem with Google Play. He also notes that Mignogna had been removed from RWBY as well.

Thank you for the response. That helps clear it up. He also appears to have been removed from Google play and I’m hearing FMA credits as well.

Please inform @RoosterTeeth that he appears to have been removed from RWBY. https://t.co/JtifMCgkB8

Funimation would respond explaining that “The Google Play listing is not our official listing. It may be pulling the cast list from somewhere else on the internet.”

They would then once again explain they don’t have the rights to Fullmetal Alchemist.

As for Fullmetal Alchemist, we haven’t had the rights to the TV series or the Conqueror of Shamballa movie since 2016. Our blog from back then announcing this can be found here: https://t.co/czrdInv8V4

As of this writing, we can confirm Mignogna does now appear on the cast listing for Dragon Ball Super: Broly on iTunes. 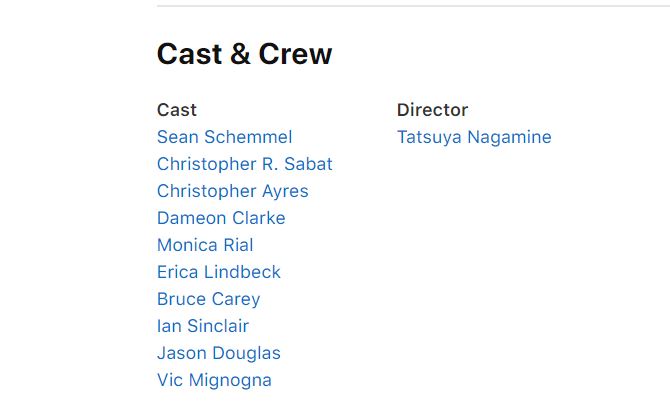 Hey @FUNimation I'm glad that you got @vicmignogna listed back on @iTunes for Super Broly.

But please compare the screenshots below. One is a new, incomplete profile for Vic, the other is the real profile. I assumed the new one was temporary, I guess these take a while to fix. pic.twitter.com/I1XEif2qWs

Mignogna is still not credited on Google Play for Dragon Ball Super: Broly.

What do you make of Funimation’s response? Do you think there is some kind of conspiracy as to why Mignogna’s name wasn’t credited?

**Editor’s Note: This article was updated at 3:45 PM ET to include information on the Dragon Ball Super: Broly Vic Mignogna profile.**