“Journalist” Chris Scullion indicated that he does not want Earthworm Jim creator Doug TenNapel involved in the newly announced game.

To the excitement of many fans, Intellivision Entertainment CEO Tommy Tallarico announced that Earthworm Jim was coming back! In fact, he revealed the original team would be returning.

That original team consists of Doug TenNapel, David Parry, Mike Dietz, Nick Bruty, and of course Tom Tallarico. The news came as a part of the 25 year anniversary celebration of the franchise.

HERE IT IS! THE BIG NEWS! OVER 20 YEARS IN THE MAKING! EARTHWORM JIM IS BACK! WITH THE ENTIRE ORIGINAL TEAM AND EXCLUSIVELY ON THE INTELLIVISION AMICO!! LIVE CHAT WITH THEM DURING OUR 1ST DESIGN MEETING THIS SATURDAY! PRESS RELEASE: https://t.co/cKRPUcprzH pic.twitter.com/45B4rKOJ9J

While most people were excited about the prospect of the return of a well-remembered and beloved franchise, Chris Scullion, who has written for Nintendo Magazine UK, Vice, Nintendo Life, and Polygon was not pleased that Doug TenNapel would be attached to the new video game.

On Tallarico’s Facebook announcement, Scullion noted he would find it hard to support TenNapel and even indicated it would be “trickier for me to review this one if Doug is involved.”

When Keith Boesky celebrated the return of the team and commented about who didn’t love Doug TenNapel, the creator of the Earthworm Jim character , Chris Scullion stepped in and provided his two cents. 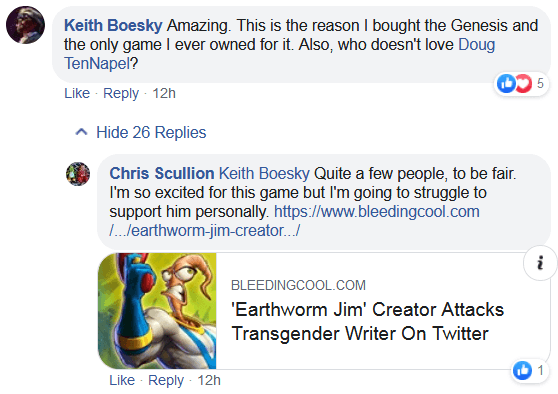 The article that Chris Scullion is referring to is from a Twitter exchange between Doug and Kotaku writer Heather Alexandra in 2017. During their back and forth, Doug referred to Heather, who is transgender, as a “good man.” 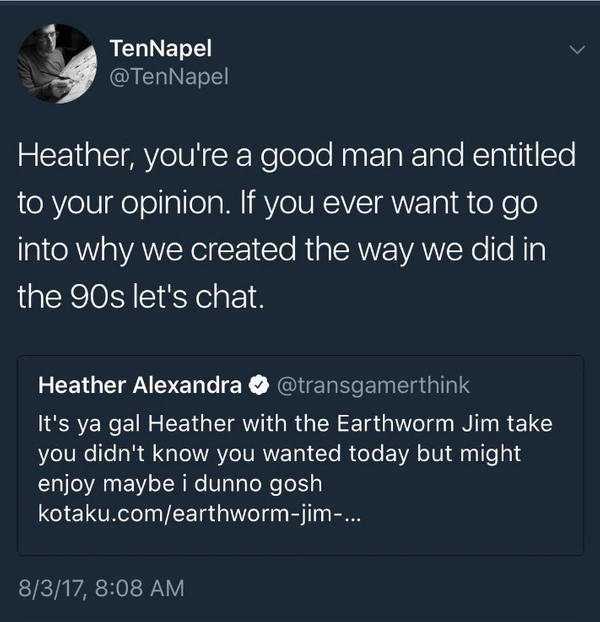 Tommy attempted to keep the conversation from being derailed. He noted that he “respect[s] everyones (sic) right to decide whatever the heck they want. No worries.” He also noted that whether or not the brought Doug on for the game “people would be upset.” He described it as a “no win situation no matter what as it’s absolutely impossible in this day and age to please everyone.”

He did make it clear that “it was the entire team of 10 of us who created the experience that everyone knows and loves. A complete team effort with no one having more important opinions or visions over anyone else. Making the game with the original team is the only true way to keep it 100% authentic.”

That’s when Chris Scullion responded stating “that it may be trickier for me to review this one if Doug is involved.” He basically implies that he will give the game a bad review or cover it in a negative fashion no matter how good the game is because TenNapel is attached to the game and has different ideas than he does.

Chris Szarek called Scullion out for his implied threat. Indicating that “if your review is biased because of anyone involved then you shouldn’t be a reviewer.” Szarek’s words echo the Society of Professional Journalists and their ethics code which states, ” Something that the Society of Professional Journalists points out in their ethics code. They state, “Even advocacy and commentary has an obligation to be accurate. And it needs to be identified, so the public doesn’t confuse it with what should be an impartial, accurate approach to the events of the day.”

Szarek pointed out that being a journalist means you’re supposed to be able to put your personal differences aside and cover the story fair, aka Journalism 101.

Scullion quickly retorted that he’s been doing his job for 13 years without an issue thus far.

The back and forth between Szarek and Scullion began to involve James Gunn and his numerous tweets and blog posts referencing pedophilia. That’s when Tommy tried to smooth things over when he asked if Scullion’s view would change if TenNapel was not making any money from the game, but rather just “getting together to come up with ideas.”

Szarek wasn’t buying that argument and noted, “But whether he makes money or not, as a journalist you report the facts about the game and leave bias at the door.”

Scullion responded writing, “I’m more than capable of reporting on the game but not mentioning Doug’s conduct would also constitute deliberately withholding information that may influence a reader’s decision to buy the game.”

Seeing that the conversation still wasn’t going his way, Chris Scullion opted to request that he and Tommy Tallarico take their discussion to email instead.

It didn’t end there for Chris Scullion and Szarek. Szarek pointed out that “Doug’s personal views have no bearing on game quality and in this politically correct snowflake-led world, everyone is offended by something. Just play the games or don’t. Stop crucifying others because they don’t believe what you believe.” 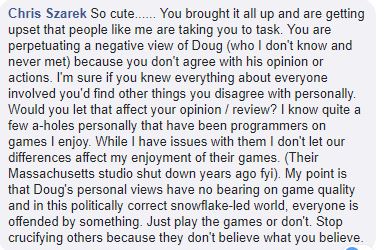 The conversation between the two continued. With both of them echoing their previous points. It seemed to have finally concluded with Szarek noting that Scullion had blocked him on Facebook.

However, before Scullion allegedly blocked him, he did indicate that a game review is “personal opinion.” And while he is right, Scullion indicated he would not just be giving his opinion on the game. He previously stated he would include his opinions about Doug TenNapel’s personal views that would seemingly have nothing to do with the actual game. 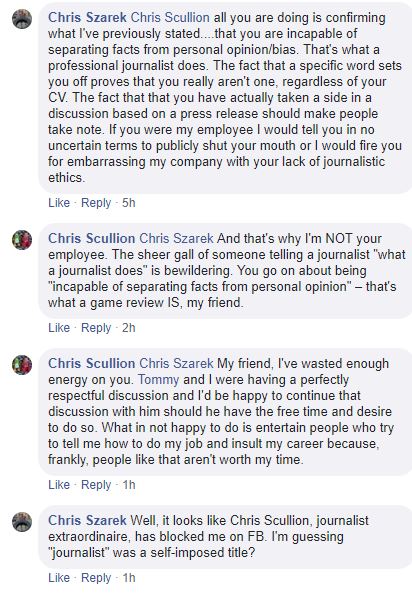 TenNapel caught wind of the conversation and indicated he would be open to having Scullion on his show. He also noted that Scullion has “never once tried to contact me even for a simple fact check.”

Good article. And I’d be glad to have Scullion on my show to talk about anything he wants. He’s never once tried to contact me even for a simple fact check. https://t.co/E6AYsMuO86

TenNapel also indicated that the Earthworm Jim developers will not cave under pressure.

Not these guys. They know what they’re doing. https://t.co/S9Utfpq9u3

What do you think of this entire situation? Does Chris Scullion have a point in his view that game journalist have a duty to wear their personal political opinions on their sleeves? Do you think they should be including their personal opinions about other people’s worldviews in reviews of video games? What do you make of the return of Earthworm Jim and Doug TenNapel’s response to Scullion’s comments?