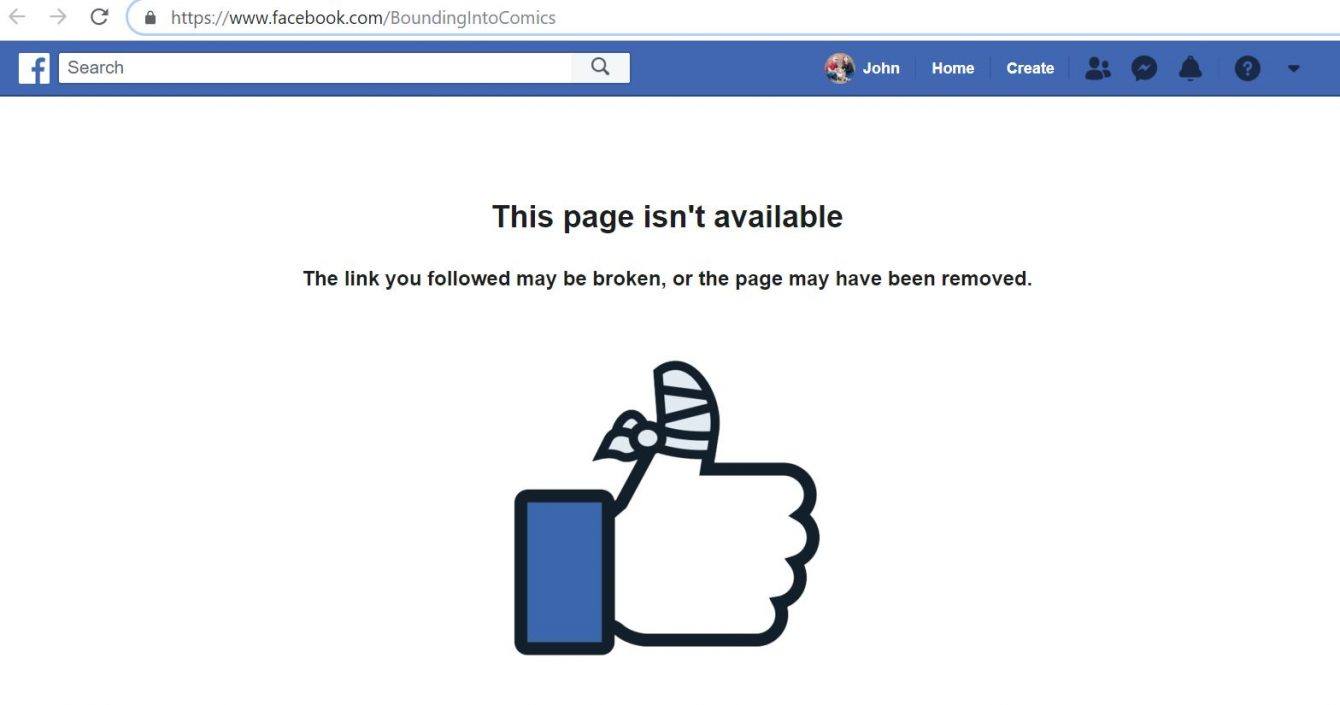 Facebook did not provide any warnings and didn’t really explain why the page was removed.

The page was removed on Monday around 10:20 a.m. ET shortly after we published the new Spider-Man: Far From Home trailer. I was logged out of my personal Facebook account, which I use to manage the Bounding Into Comics Facebook page. Upon logging back in, I received a number of alerts from Facebook indicating they had removed ‘Content’ which ultimately meant they had removed not just content posts but all traces of the Bounding Into Comics Facebook page.

The first alert indicated Bounding Into Comics was being removed because it violated “the Facebook Statement of Rights and Responsibilities.” 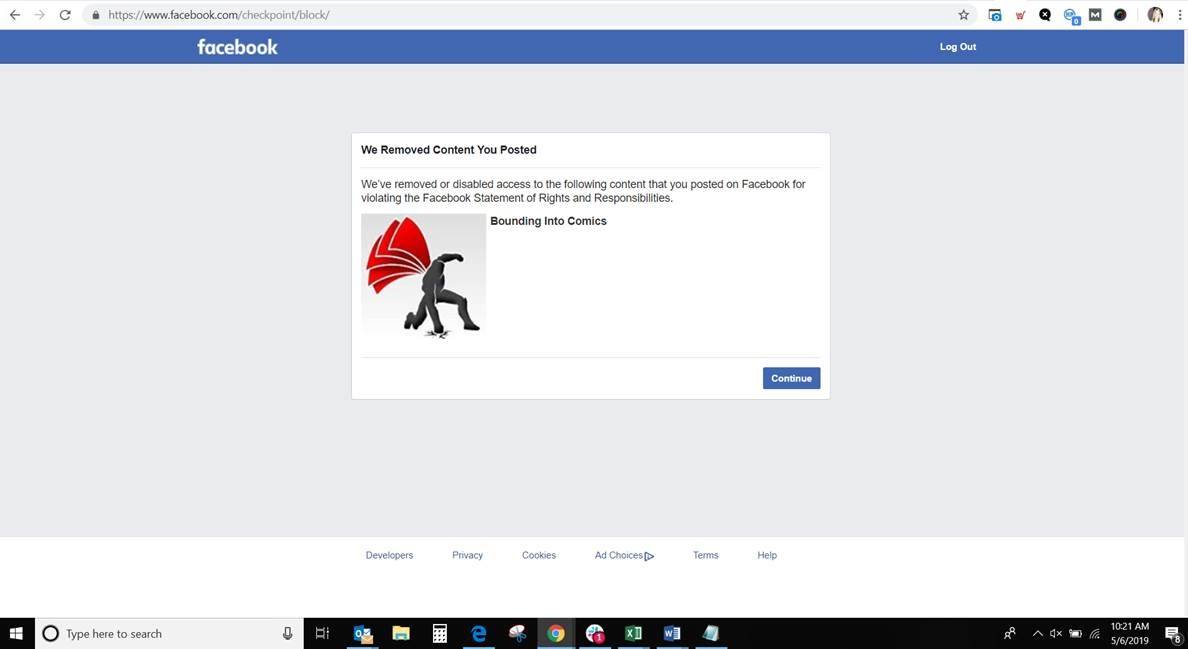 The next alert read, “Our policies prohibit posting content that infringes or violates someone else’s rights or otherwise violates the law.” 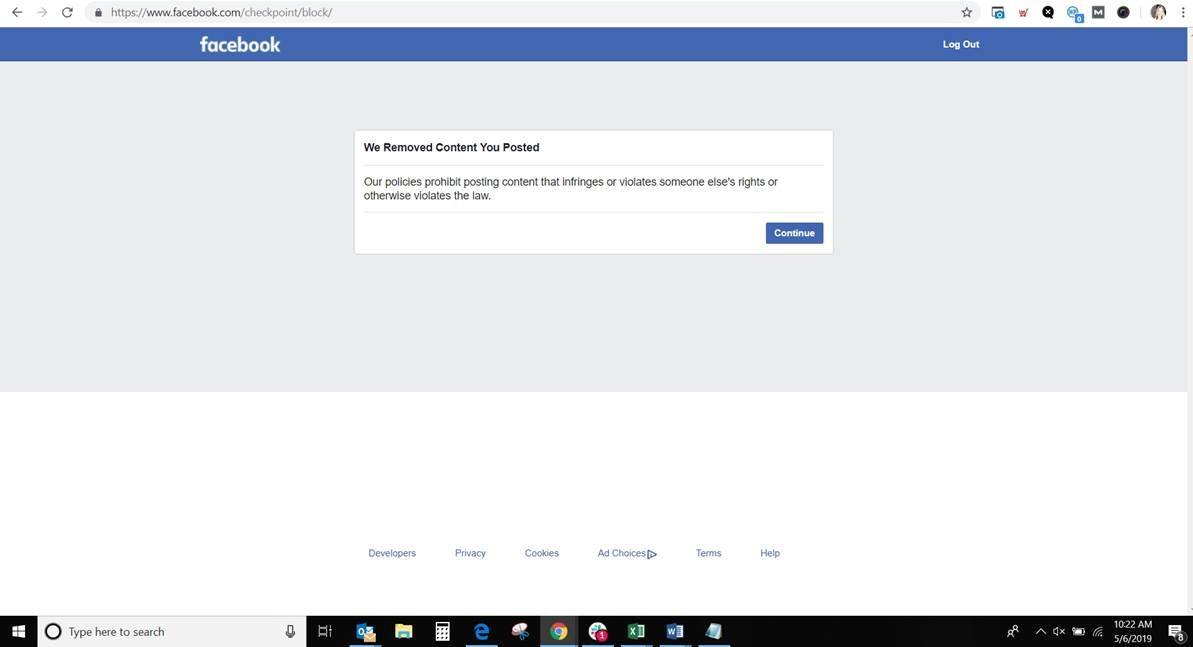 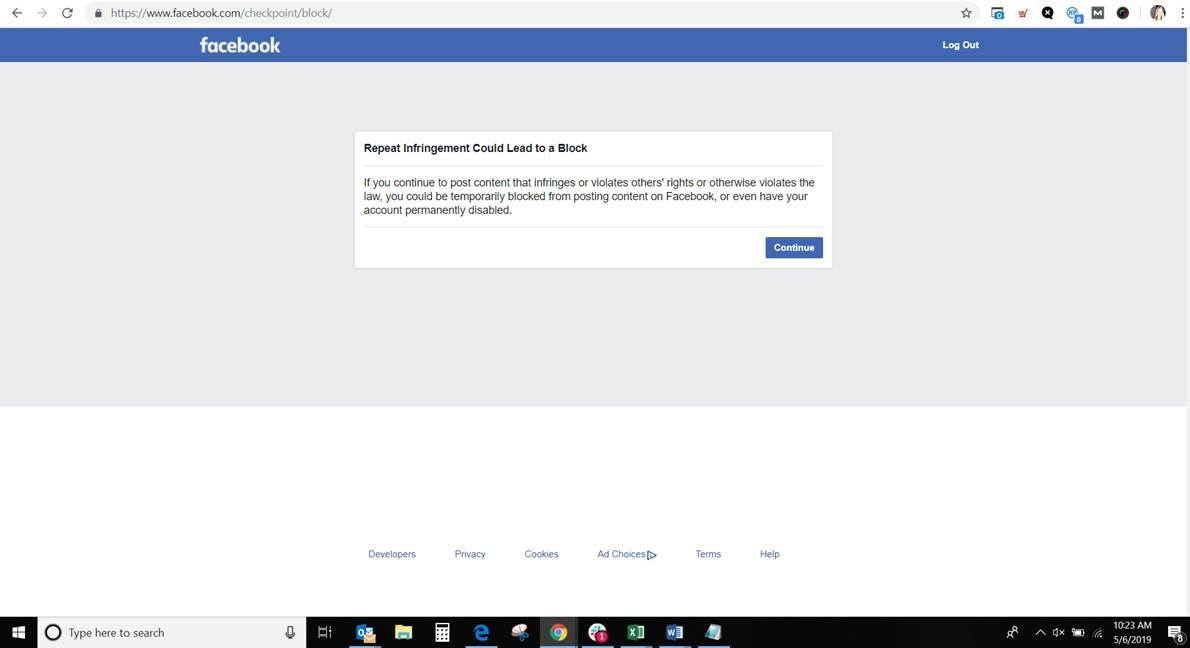 The next alert then directed us to review Facebook’s Intellectual Property Policies. It read, “If you have questions regarding the removal of content please visit the Help Center. To help keep your account in good standing, remove any other content you’ve posted to Facebook that may infringe or otherwise violate another’s rights. To learn more about intellectual property, visit the Help Center.” 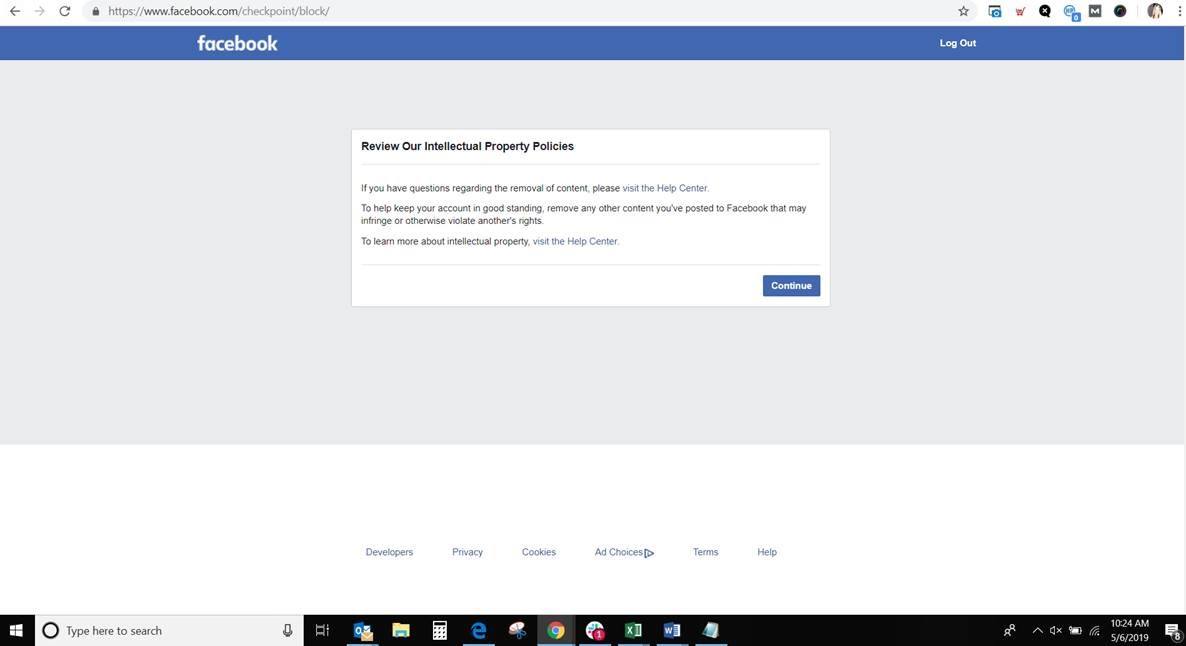 Two of the messages then repeated. The next alert read, “Our policies prohibit posting content that infringes or violates someone else’s rights or otherwise violates the law.” 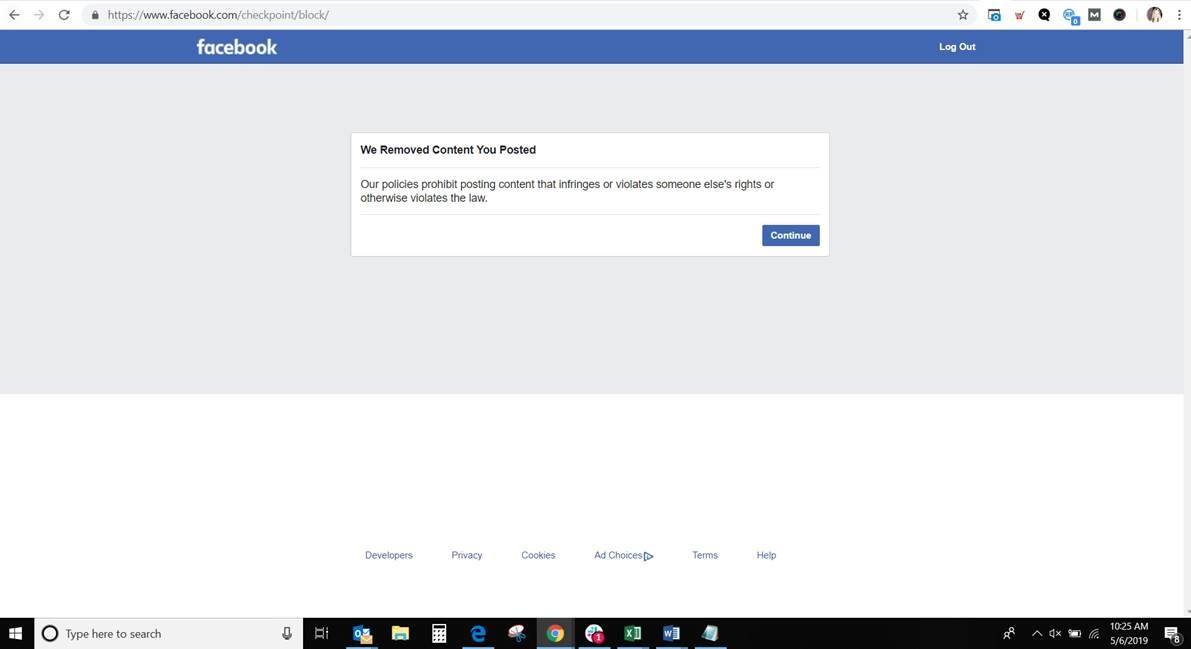 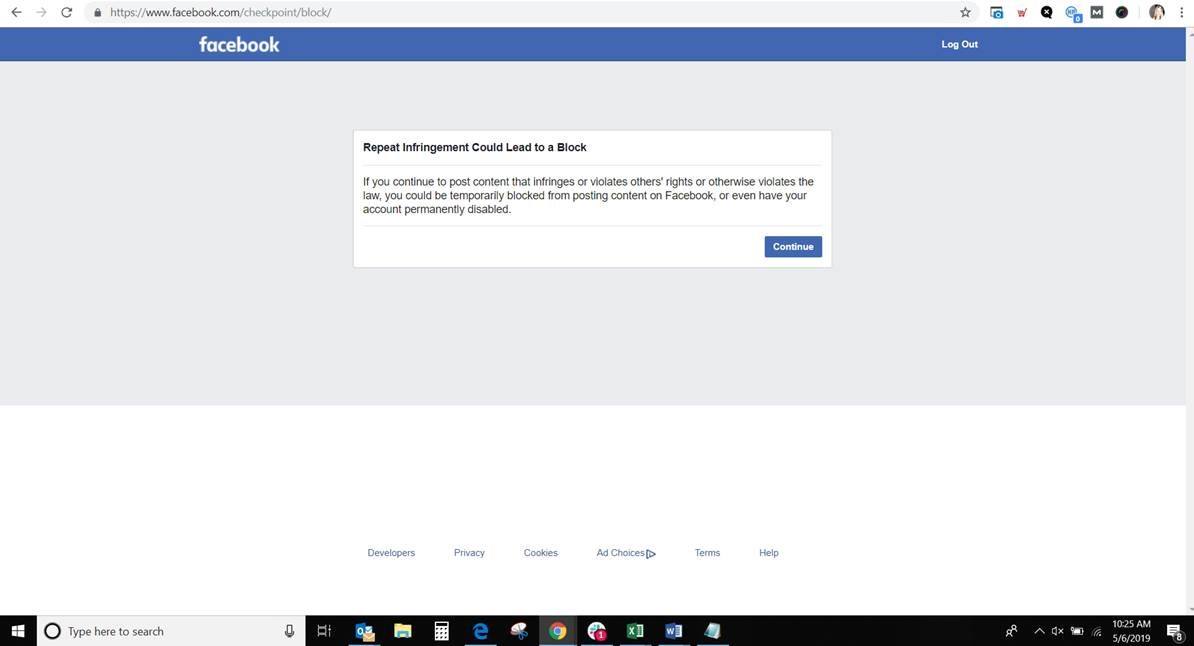 As you can see, Facebook did not provide us with any actual concrete examples of the alleged violation. In fact, the reason why we are writing this article today, instead of yesterday, is because we attempted to reach out to Facebook believing the removal of the page was inadvertent. However, Facebook has not responded to any of our Help Center inquiries. They stopped responding in an email thread with a Publisher & Media Support team representative once the page was identified.

Given recent reports of Facebook and Twitter removing pages that do not align with their views, I think it is safe to assume that Facebook is likely targeting Bounding Into Comics due to the nature of the content we cover and post.

Bounding Into Comics contributors are not afraid to offer a critical look at the current entertainment culture as it pertains to the comic book industry, Hollywood, and video games. We are on the front line of highlighting the behavior of a number of the executives in these companies whether it’s Marvel’s Sana Amanat who unabashedly stated that “Mexicans, Jews, Muslims, women, native America, the environment, science, and KIDS” are all things “TheRepublicansHate.”

We also brought to light IDW executive Justin Eisinger’s comments. Eisinger intimated he wanted to execute Donald Trump supporters via a guillotine before asking a reporter if she punched a Trump supporter in the face.

Bounding Into Comics was openly critical of Electronic Arts’ response to fan criticism of Battlefield V. We covered the story extensively, which saw EA eventually admit that they completely mishandled the Battlefield V situation resulting in a missed earnings goal.

We also cover celebrity opinions. Specifically their opinions and influence on culture – from how they are raising their families like Charlize Theron and Zoe Saldana’s children – to their views on President Donald Trump and his supporters given many of those supporters are the very fans who watch the movies they star in like Avengers: Endgame actors Don Cheadle, Chris Evans, and Mark Ruffalo.

We don’t intend to curb our extensive coverage of culture – from nerd culture to pop culture and everything in between. Our team will report the facts, offer candid opinions, and not cow to Facebook’s attempted censorship.

That’s where you come in. Facebook’s political ploy only has power if you rely on their platform to follow us. Which is why is it is more important than ever to sign-up for our email list.

Our newsletter is sent out every weekday and provides our readers with our unique brand of commentary as well as the most pressing news in the entertainment industries! Sign-up now!

Social Media companies like Facebook can delete and ban pages on a whim without any recourse, wiping out years of hardwork and countless fan connections. However, they can’t censor our email. That’s why I’m imploring you to sign up for the Bounding Into Comics email list. It is more important than ever.

With Facebook shutting down our page, we have launched a presence on MeWe. Be sure to follow us there. Not only do we have a page on MeWe, but you can also join the Official Bounding Into Comics Fans group.

You make the difference in whether Facebook and media giants can silence us. If you are a fan, PLEASE:

We are still on Twitter. If you are on Twitter and aren’t following us already, you can do so here.

With Facebook shutting down our page, we have launched a presence on MeWe. Be sure to follow us there. Not only do we have a page on MeWe, but you can also join the Official Bounding Into Comics Fans group.

Help us combat censorship. Share this story and let Facebook know we won’t go silently into the night. THANK YOU!