Rumors have begun circulating that Dragon Ball Super and My Hero Academia voice actress Jamie Marchi has been fired from Funimation due to a casting change regarding one of Marchi’s current voice acting roles.

Last month, a discussion thread titled [Master Thread] Strike Witches: 501st JOINT FIGHTER WING Take Off! (Dubbed) was started on the Funimation ‘Current Season Discussion’ forum. Originally, the opening post of the topic simply provided a short summary of the series alongside a list of the English ADR team and the English language voice cast, including Jamie Marchi as Charlotte ‘Shirley’ Yeager. However, a recent update to the opening post indicates that Marchi will not be voicing Yeager in the upcoming sixth episode of the series, with Magical Girl Raising Project voice actor Katelynn Barr stepping in for Marchi: 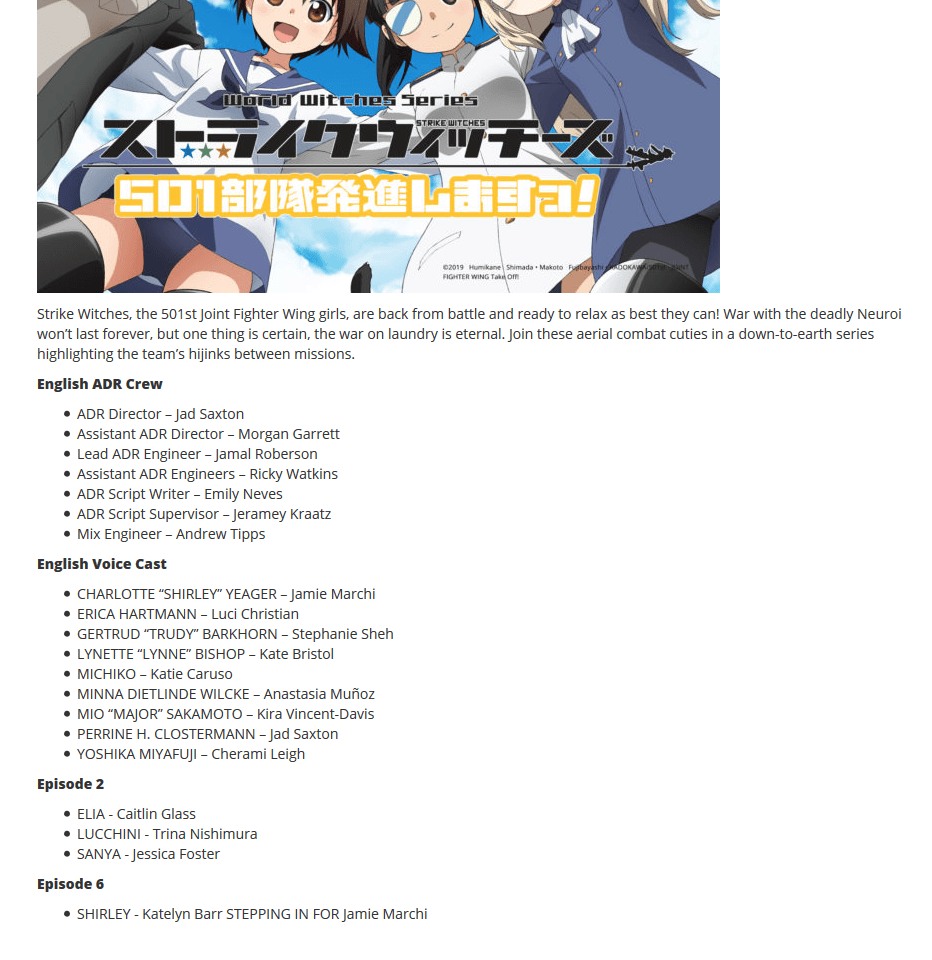 A screenshot of the updated opening post in the 501st Join Fighter Wing megathread listing Katelyn Barr as Shirley in Episode 6.

Following the announcement of Marchi’s replacement, rumors began to circulate that this replacement indicated that Marchi had been fired by Funimation. This rumor was met with various opinions among fans as some celebrated, some reached out to Marchi out of concern to confirm, and others reminded audiences that this announcement was merely a rumor:

There are Reports that Jamie Marchi has been FIRED from Funimation because she has been Replaced in Strike the Witches Anime Dub. Can Anyone confirm this news? This would be the first major loss for #KickVic and a HUGE Win for #Istandwithvic pic.twitter.com/YZFMYPS3wT

If it’s true that you are fired you won’t be missed.

Not only had you attacked an innocent man and fans who disagreed with you.

But also ruined dubs with your shitty ADR directing. Prison School, Dragon Maid, so on.

You in every dub have a bitchy voice.

So I’m hearing rumors that Jamie Marchi got fired from Funimation.
But that’s only that: rumors. Unless there’s confirmation, we don’t know if that’s true or not. So let’s not jump into conclusions for the time being.

The listing for episode six of 501st JOINT FIGHTER WING states that Barr is “STEPPING IN FOR” Marchi, which could indicate that this replacement was temporary, most likely in order to meet their simulcast obligations. As of writing, Marchi’s firing from Funimation remains unconfirmed as neither Funimation nor Marchi have publicly addressed the subject.