After so long stuck in development, Dwayne Johnson’s Black Adam movie is moving along and now looks to have found a director.

Variety reports Spanish director Jaume Collet-Serra is tapped to assume duties for the Shazam! spinoff. Black Adam will be his second collaboration with Dwayne Johnson. Reportedly, Collet-Serra was recommended by star Johnson and his co-producers at Seven Bucks after the two worked together on Jungle Cruise for Disney, lighter material than what the director normally works on.

Collet-Serra is best known for Non-Stop, Unknown, and The Commuter, thrillers starring Liam Neeson, and Run All Night — a crime drama about an Irish blood feud in New York starring Neeson and Joel Kinnaman. He rose to fame on two horror films: 2005’s House of Wax remake and the cult film Orphan, returning to the genre in 2016 with The Shallows. So he has a little in common with Shazam! helmsman David Sandberg, who transitioned as well from some darker fare.

Variety’s sources say Black Adam is a big priority for Warner Bros. and New Line thanks to Shazam!’s favorable box office and the slow build to “The Rock” stepping into the supervillain role of Black Adam he has been tied to for years. 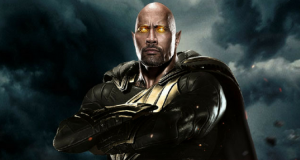 The rumor was he’d appear as the villain in Suicide Squad 2 or the first Shazam! movie. Neither seems to have panned out and producers made the choice to separate them with each having his own movie first. Johnson shared the announcement back in April a Black Adam solo movie was happening on Instagram.

Black Adam received a mention from The Wizard, and a holographic record illustrating how the Council went wrong in choosing him in Shazam!.

The character first appeared in Fawcett Comics in 1945, Teth-Adam was chosen as The Wizard’s first champion in Ancient Egypt. Teth proved ignoble and let the power corrupt him.

No plot details are known yet but the latest screenplay draft is by Rampage co-writer Adam Sztykiel who we reported is deriving inspiration from David Goyer and Geoff Johns. What may happen is the introduction of the Justice Society of America, Hawkman, Stargirl, and Atom Smasher leading to divisions and a coup by Adam of his home country, Kahndaq.

Production is slated to begin next year.