The sun might be setting on Ray Fisher as Cyborg in the DC Extended Universe, but the actor isn’t giving up on comic book characters and film universes. At a recent convention appearance in San Antonio, he expressed interest in joining the Marvel Cinematic Universe and filling some well-worn day-walking shoes.

Fisher stated at Celebrity Fan Fest last weekend he would love to take over for Wesley Snipes in the role of Blade, who hasn’t been seen on the big screen in quite a while, leaving some to wonder if the Daywalker will ever surface again.

Ray Fisher said if he were to play any role in the MCU it would be BLADE! #CelebrityFanFest pic.twitter.com/UBRjOzLdcj

The last movie was Blade: Trinity in 2004 which completed a trilogy that began in 1998. Blade became an unexpected hit as well as a franchise, making the vampire hunter an iconic action hero and opening the door for Marvel’s eventual Hollywood success.

Now merged with Disney, they reacquired the property and a new series is rumored to be in development for Hulu. A Blade TV series originally meant for Snipes and Showtime aired on Spike TV (now Paramount Network) starring rapper and actor Kirk “Sticky Fingaz” Jones. It only lasted a season. 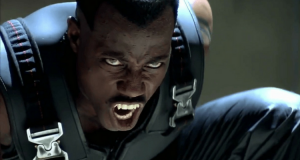 Snipes returning is not out of the question either. A report last March said Marvel is developing a new R-rated film starring him, possibly training his daughter, and they have a script. The actor stated repeatedly in the past he is open to coming back and has talked with Marvel about it over the last two years. He is also very outspoken on social media he is the one and only Blade.

As for Cyborg, a standalone movie was announced in lieu of Justice League but has not moved forward. Fisher isn’t losing hope one could materialize. He told everyone at Celebrity Fan Fest he doesn’t think we’ve seen the last of his self-described “S-tier” Victor Stone. Warner Bros. has a slate of DC films set for the next few years; Cyborg, however, isn’t one.

Zack Snyder had big plans for Cyborg in his Justice League that made him critical in turning back time and stopping Darkseid from killing Lois Lane. Fisher, who praises Snyder’s vision, has been sharing Snyder Cut clips and images over the last few months and wants the whole thing released. The odds Warner will do that are slim.

Do you want to see Ray Fisher as the next Blade? How about his chances continuing on as Cyborg? Let us know.