Andy Signore, the creator of popular internet movie commentary channel Screen Junkies and one of the first major personalities to be accused of sexual assault following the start of the #MeToo movement, has ended his absence from the internet with a video defending himself from the accusations and providing evidence that his accuser was far from truthful.

On June 25th, Signore settled his defamation against his former employer, Defy Media. Signore was suspended by Defy Media on October 6, 2017 following sexual assault accusations. While the terms of the settlement have not been made public, Signore gave a statement to Variety indicating that his next goal was to clear his name:

“While I will not discuss anything related to my former employer, I am relieved that this is finally behind me and looking forward to exposing the truth. Now that the case has been settled, I plan on releasing evidence and information, which will absolutely refute the false accusations of sexual assault, abuse and retribution. I did not do these things, and in the coming days I will provide materials to support this, so I can finally move on with my life.”

The release of evidence and information came on July 22nd, as Signore uploaded a video to his latest channel, Popcorned Planet, titled #MeToo Misfire – An Honest Defense of Andy Signore:

Though the video centers around the evidence and information teased by Signore, he begins the video by accepting responsibility for his actions, admitting that he acted in a less than respectful manner towards various parties:

“It’s important that I re-emphasize: I’m sorry. The truth is, I did awkwardly flirt with and make inappropriate comments to some of my fans, despite being married. In doing this, I betrayed so many people that I love and respect. I put them into horribly awkward and uncomfortable positions, and I’m truly sorry for this behavior. When I look back, I realize, I was sometimes a real jerk. I was selfish, I was arrogant, I was angry, I was way too full of myself. I completely lost focus on what was truly important around me. I’m not proud of this behavior, and I never want to be like that again.”

However, Signore fully rejects the accusations of assault and depictions of himself as a predator, stating that “these egregious claims labeling me a sexual predator, workplace harasser, and a rapist, are categorically untrue.”

Signore was first accused of sexual assault by a woman named April O’Donnell, aka April Dawn. She first accused Signore of assault in October of 2017. She followed up her initial accusation with a detailed statement (Archive link: http://archive.is/anqWQ) claiming that Signore had tried “to force himself on me,” “took photos of me without my permission,” and that he “used my relationship with [Screen Junkies Employee Jack “JTE” Tapia] against me.”

I know many have questions regarding what happened to me regarding Andy, here is a more detailed summary of what I’ve been going through. pic.twitter.com/tIbHnLBrOB

In his video, Signore presents multiple pieces of evidence to refute these claims:

Signore also addresses the accusations leveled against him by Emma Bowers, a self-proclaimed former intern at Screen Junkies. This accusation, along with O’Donnell’s, stood as the pillars of the monumental evidence against Signore: 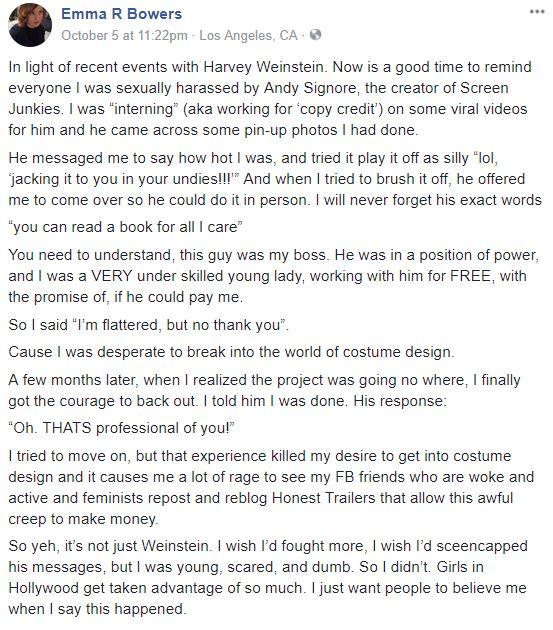 Signore claims that Bower “falsely inflated a decade old mutually awkward exchange we had by painting me as a sexed crazed boss demanding ‘action’ from an intern,” noting that he had worked with Bowers years before his time at Screen Junkies, and that she “was not an intern, nor did she work with me at Screen Junkies” before detailing the events from his perspective:

“I was both surprised and flattered one evening when she opted to share with me a link to her own nude pin-up photos. I don’t recall saying exactly what she accused me of, but I am confident that I responded with compliments. I was married, so we both regretted the shift in tone, and we mutually apologized.”

At the end of his video, Signore states that he cannot provide a definitive reason for O’Donnell’s choice to level these accusations against him, but speculates that it was because “she got a taste of Hollywood”:

“I don’t know the truth about what motivated April. However, I believe she was using me for access to my brand, and I believe when I became unavailable due to being married, she moved on to my colleague, and I believe that she didn’t want him to think that she was using him too. As she got a taste of Hollywood, and their relationship got more serious, I think she was willing to do whatever she had to do to keep her house of cards from collapsing and protect her relationship, even if it meant taking me out.”

Following the publication of this video, O’Donnell posted a statement to her Twitter account, stating that she initially came forward “to make sure no harm would come to any more women” and that she would not be “giving anymore of my time or energy to this” because she is “moving on for my own mental health.” (Archive link: http://archive.is/epdrJ)