Sylvester Stallone’s latest film Rambo: Last Blood is about to hit theaters this weekend and film critics are doing everything in their power to try and prevent moviegoers from seeing it.

They are full on slamming the film, not for its actual story, plot, characterization, set designs, or cinematography. Nope, it’s all about the political nature of the film. 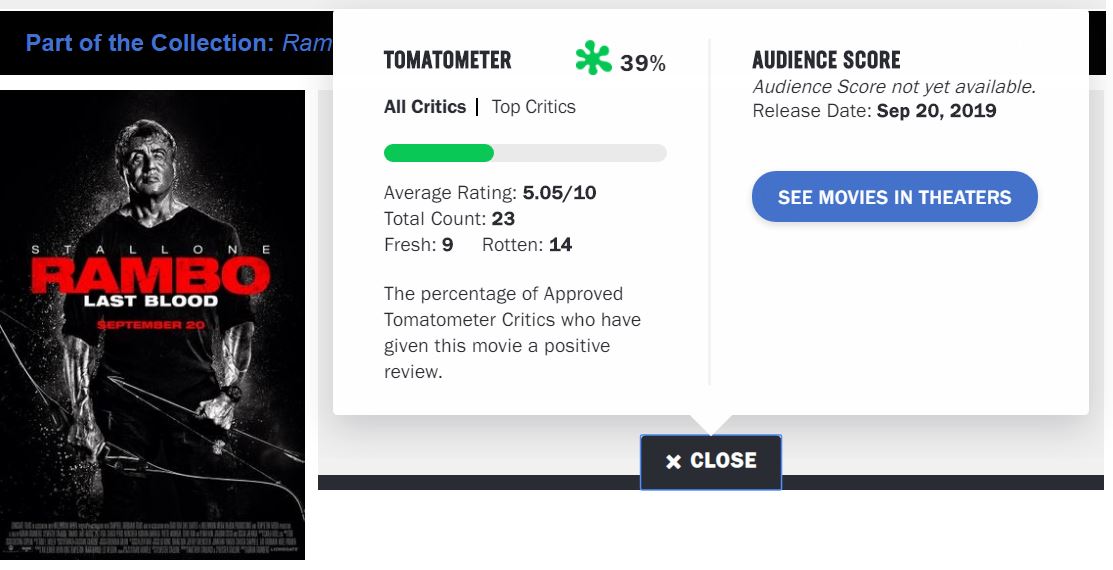 Peter Debruge at Variety describes the film as a “cruel and ugly showcase of xenophobic carnage.” He goes on to accuse the film of racism, “screenwriters Matthew Cirulnick and Stallone adopt the racist view of Mexicans as murderers, drug dealers and rapists, devoid of cultural context or exceptions, beyond the “independent journalist” (Paz Vega) keeping tabs on their whereabouts.”

His own politics bleed into the review when he references President Trump’s pledge to build a wall, ”

The Guardian’s review by Peter Bradshaw makes it clear their review is all about politics in the first sentence.

“This massively enlarged prostate of a film can only make you wince with its badly acted geronto-ultraviolence, its Trumpian fantasies of Mexican rapists and hilariously insecure US border, and its crass enthusiasm for rape-revenge attacks undertaken by a still-got-it senior dude, 73 years young, on behalf of a sweet teenager.”

But Gabriela drives over anyway, at which point she falls prey to a Trumpian array of bad hombres, including a pair of central-casting cartel sex slavers named Victor (Oscar Jaenada, “Cantinflas”) and Hugo (Sergio Peris-Mencheta, “Snowfall”).

There’s also the implication of racism as he refers to Rambo as a “white-savior.”

As vengeance kicks in, one starts to realize that the success level of Rambo’s white-savior efforts depends on a revenge math equation involving age, planning and tools.

Rambo has long been a symbol of imperialistic rage, and “Last Blood” is no exception. Transplanting the action to Arizona provides the natural setting for a border drama that plays into Trump-era fear-mongering, right down to its ominous shot of a border wall, as Rambo heads south in search of justice.

He goes on to refer to the film as propaganda:

“Fortunately, by propaganda standards, it’s weak sauce, as the movie unfurls with bland, tiresome developments until the closing minutes.”

Not only that, but he decries Rambo as “problematic.”

“If only “Last Blood” had more to say about that beyond the jingoistic mishmash of dime-store sentimentality and half-hearted vengeance it shrugs into existence, bidding farewell to an action icon in the same grotesque terms that made him so problematic in the first place.”

Harris Dang of Impulse Gamer would also decry the film as racist and misogynistic.

“It is also embedded with Taken’sxenophobia. The men are either hoodlums, drug dealers, human traffickers, or terrible fathers. The representation of women is misogynistic too. They are portrayed as victims, plot devices, and worry-warts.”

“The impetus for the film’s action comes from a plot that closely resembles Taken in both its setup, its older dad action fantasy, and its cultural insensitivity.”

She adds the film is “offensive” as well.

“The filmmakers have made Mexico seem like an infinite wasteland of crime and death, and most of the Latinx characters on screen are criminals or broad stereotypes. I understand that Rambo films have rarely been bastions of cultural togetherness, but in 2019, these broad stereotypes are offensive and dated and downright irresponsible.”

Edward Douglas at ComicsBeat makes it clear his review is all about politics writing:

“Maybe I never got into the whole Rambo franchise, because when Stallone introduced the character back in the ‘80s, it contributed to all the “Rah! Rah! USA!” stuff that was going on under Reagan. Whether on purpose or not, Last Blood does something similar for the racist red hats wanting to “make America great again,” despite the presence of a few underused good Mexicans.”

Anton Bitel at Little White Lies implies the film is racist in his review:

“This time he heads across the controversially soon-to-be-walled border where he must confront some vicious Mexicans (America’s other du jour).

Not that Rambo himself is racist, exactly.”

He then laments the patriarchy.

“In a sense, he is right back where he started in the original First Blood, aimlessly wandering the country, and inevitably headed into yet more trouble. America’s patriarchal history could do with becoming more feminine.”

This is the state of the current critic in Hollywood. These are the people Rotten Tomatoes chooses to feature. People who put their own personal politics above a film review. These individuals are not helping moviegoers make decisions on what films to see. They are trying to be gatekeepers of culture. They are trying to prevent people from seeing films that might make them look at the world differently than their own political view.

Fortunately, audiences are rejecting these reviewers left and right. We saw it with reviews to Rian Johnson’s The Last Jedi. Moviegoers gave the film a Rotten score while critics had nothing but praise.

The same thing happened with the new Ghostbusters film. Critics raved about the film with a 74% Fresh score while audiences rejected it with a 50% Rotten Score.

Most recently, these gatekeepers have targeted comedians who have made them the butt of many of their jokes. Critics lampooned Dave Chappelle’s Netflix special Sticks & Stones with a 31% Rotten Score. However, audiences responded with an overwhelmingly 99% approval rating.

Their gatekeeping isn’t working and it will never work. I’d wager Rotten Tomatoes’ Critic Score might actually drive more people to go see the film when it’s so obvious they are trying to lampoon it from an outlandish political perspective.

Do you plan on seeing Rambo: Last Blood now?