Recently released poll data shows that Blizzard employees supported the company’s decision to punish Hearthstone player Blitzchung. The data also suggests that employees do not believe in having a free speech policy when it comes to controversial topics in China.

The two-question survey was conducted by the development team of Blind, which is an anonymous messaging app used by employees of technology companies. As reported by Wagner James Au on his New World Notes, Blind asked two different questions regarding Blizzard’s recent conduct regarding Hearthstone player Blitzchung and their relationship with China.

The first question asked was, “Should Blizzard reverse its banning of the Hearthstone player?”

Riot Games employees were split down the line with half of them answering “Yes” and the other half answering “No.” 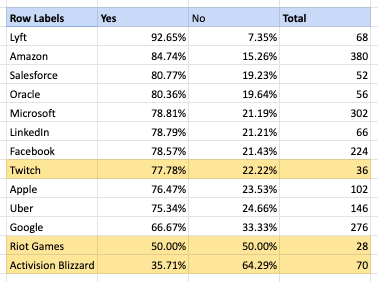 The second question asked, “Do you think Blizzard should have a strong free speech policy for players regarding Hong Kong and other controversial topics in China (Tibet, Tiananmen, Taiwan) — even if it hurts Blizzard financially by a loss of Chinese revenue?”

In a shift from the first question, 85.71% of Twitch employees answered “Yes” with only 14.29% answering “No.” Those percentages would be slightly higher than their parent company Amazon which saw 82.78% answer “Yes” and 17.22% answer “No.” 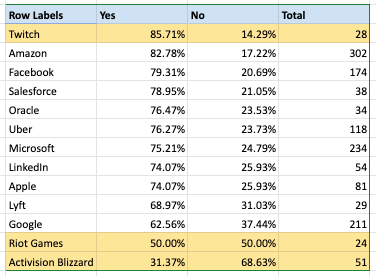 Blind’s co-founder Kyum Kim explains the polls it runs are anonymous, “Blind allows employees at companies to share their opinion anonymously, which means they can share their honest opinions without fear of judgment.”

What do you make of these results? Are the results of the survey a surprise to anyone? Let me know your thoughts on the survey results in the comments section!