Shortly after the death of ISIS leader Al-Baghdadi, the horror legend posted a tweet about those who suffer in warfare, a combat dog, and the suffering of all living things as a criticism of Donald Trump.

“He may have died a coward Donald Trump but ALL living things suffer when they are blown up. Anyone who has experienced warfare, unlike yourself, would know that. War is brutal. Dogs are brave, bold, loyal, loving and healing.” 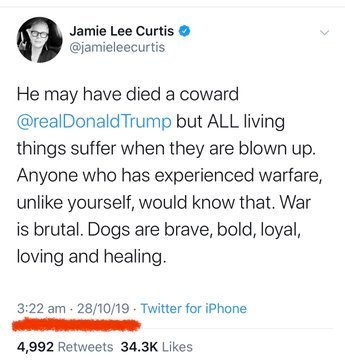 The tweet is rather bizarre because it’s hard to make out what she’s actually talking about. It’s almost like she has three or four different thoughts running through her brain and decided to put them all in one single tweet.

It appears her first thought is to criticize President Donald Trump for the way he described Baghdadi before he committed suicide after being cornered by U.S. Armed Forces. Trump detailed, “He died after running into a dead end tunnel, whimpering, and crying, and screaming all the way.” He also described Baghdadi as a “coward” and “loser.”

However, she then notes that “ALL living things suffer when they are blown up.” It’s unclear if Curtis is attempting to be sympathetic to the brutal, terrorist leader or if she is referring to the heroic canine who was injured during the raid. Because she does note at the end of her tweet that “dogs are brave, bold, loyal, loving, and healing.”

It’s really unclear what kind of point she was trying to make, but it most definitely was not received well with many believing she was being sympathetic to the terrorist leader.

Got a screenshot before she deleted it. Don’t let this be forgotten that @jamieleecurtis has sympathy for a terrorist leader. Just goes to show what the leftists are all about, not caring for the safety or greater good of the American people.#Trump2020LandslideVictory #Trump2020 pic.twitter.com/N5qqyRx7V2

Hey @jamieleecurtis here’s what a hero looks like. Who happens to also be a K9! pic.twitter.com/hzc05ewUwp

Curtis is no stranger to making political statements like many in Hollywood.  Last year she compared her character of Laurie Strode in the Halloween series to Brett Kavanaugh accuser Christine Ford.

“The movie is about trauma. Because, what happened to Laurie Strode when she was 17 — it is fiction. I want everyone to understand that I’m not saying that this happened to me. But it happened to Laurie Strode in the movies and here we are having a conversation, a global conversation about trauma and what effect that kind of trauma has on a person. And you guys talked about it earlier about someone have it affect them their whole life. Christine Ford said this affected her.”

“And the heroine of Halloween is a woman who suffered a trauma when she was 17 like Dr. Ford when she was 17. And it changed and shaped her life and now she is taking back the power which is what all of these brave women have done. And men.”

After Kavanaugh was confirmed to the Supreme Court, Curtis shared an image of a shredded U.S. Constitution.