Lucasfilm president Kathleen Kennedy stated the Star Wars sequel trilogy films are incredibly difficult to make because they don’t have “source material,” and they don’t have “comic books.”

Kennedy was asked by Rolling Stone if the final entry in Disney’s Star Wars sequel trilogy was “a particulary hard nut to crack.”

This is a lie. There is no other way to describe it. It’s a lie. Disney CEO Bob Iger admitted they received outlines from George Lucas about what the sequel trilogy would look like in his recent book.

Not only did Disney have Lucas’ outline, but they also had access to a plethora of novels, video games, and comic books about Star Wars. They had source material. They had comic books, and they had lengthy novels.

Before Dark Horse Comics began publishing Star Wars comics, they were published by Marvel Comics. The original Marvel Star Wars series was first published in 1977 and ran through 1986. There were 107 issues total. Interestingly enough Star Wars #49 published in April 1981 was titled The Last Jedi. 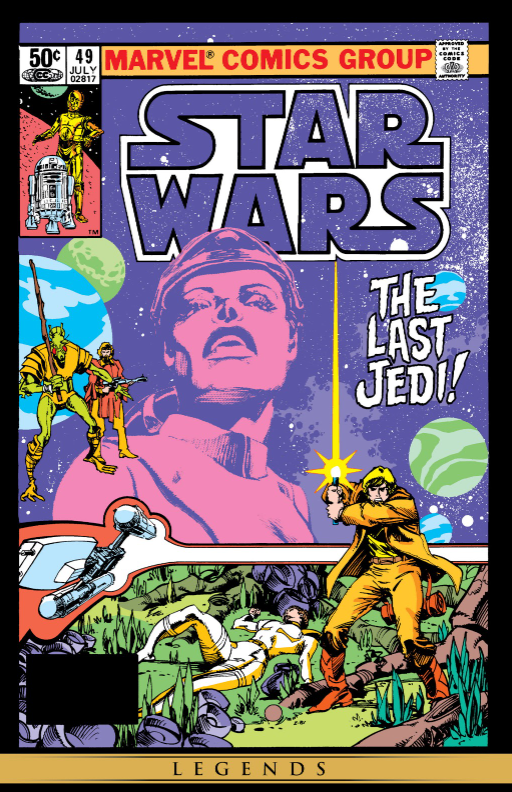 There are also plenty of Star Wars novels. Maybe the most famous is the Thrawn trilogy written by Timothy Zahn that includes Heir to the Empire, Dark Force Rising, and The Last Command. Disney also introduced Thrawn into their Star Wars canon in Star Wars Rebels. That’s right they literally took a character from a novel and stuck him in a canon TV show.

They also introduced a Hammerhead class cruiser ship in Rogue One. The ship was first introduced to Star Wars lore in the 2003 video game Star Wars: Knights of the Old Republic.

However, there is also The Jedi Academy trilogy by Kevin J. Anderson, all the Jedi Apprentice books, The Last of the Jedi books by Jude Watson, the Rebel Force books by Alex Wheeler, and Galaxy of Fear series by John Whitman.  There are literally dozens if not hundreds of Star Wars novels that Disney could have pulled from.

They also had the prequel and sequel trilogies to look at as well. In fact, one could argue that The Force Awakens is a beat for beat remake of the original Star Wars movie.

Despite this obvious lie, Kennedy continued to detail the process Lucasfilm went about to create the sequel trilogy.

“We go through a really normal development process that everybody else does. You start by talking to filmmakers who you think exhibit the sensibilities that you’re looking for.”

“And I would argue that the list is very small — people who really do have the sensibilities about these kind of movies, and then the experience and the ability to handle how enormous a job these movies are. So we try to be as thoughtful as we possibly can about making those choices.”

I don’t buy this argument either. The Marvel Cinematic Universe films are arguably just as big as Star Wars films and they are finding new talent all the time. Before Captain America: The Winter Solider, Joe and Anthony Russo had predominantly done TV series. They would go on to direct Captain America: Civil War, Avengers: Infinity War, and Avengers: Endgame.

Before Jon Favreau directed Iron Man he had directed Elf and Zathura: A Space Adventure along with a few TV movies. He went on to direct Iron Man 2, Cowboys & Aliens, The Jungle Book, and The Lion King.

Black Panther director Ryan Coogler had only two major directing credits before he did Black Panther. He had done Creed and Fruitvale Station. Black Panther did pretty well at the box office and was a solid entry into the Marvel Cinematic Universe.

However, if the sensibilities she’s talking about is wanting to destroy the character of Luke Skywalker, she’s probably right, it’s a small one.

Kennedy continues stating that some people get overwhelmed with the enormity of Star Wars.

“I would also argue that sometimes people get involved in the normal development process, and then they realize, “Oh, my God, this is so much more than I ever imagined.” So it’s pretty common that when you’re working on movies, you’re not making choices and decisions that necessarily work out exactly the way you want from the get-go. It’s been an evolving process with lots of people and lots of opinions, and then you try to shape something into what it eventually becomes.”

She then details that J.J. Abrams wished he directed all three of the Star Wars films, but says that would not have been “really physical possible.”

“So I feel really fortunate that I’ve worked with so many great people that have been absolutely committed, J.J. being one of them. He’s a huge fan, incredibly passionate about Star Wars, and has been from the moment he and I sat down and started talking about this. And the more he got involved, the more excited he became. So I think if you asked him today, he probably wishes he’d been in a situation where he could have done all three — but as I said, these are huge projects. So it’s very difficult unless there’s three or four years in between. It’s not really physically possible.”

What do you make of Kathleen Kennedy’s comments? Do you think her lie about not having source material is an attempt to soften the blow of a potential disappointing story in Star Wars: The Rise of Skywalker?