The Rotten Tomatoes and Metacritic scores for Netflix’s The Witcher starring Henry Cavill have arrived.

The Rotten Tomatoes Critic score sits at 62% with an average rating of 6.07 out of 10 based off 26 reviews. There are 16 fresh reviews and 10 rotten reviews. 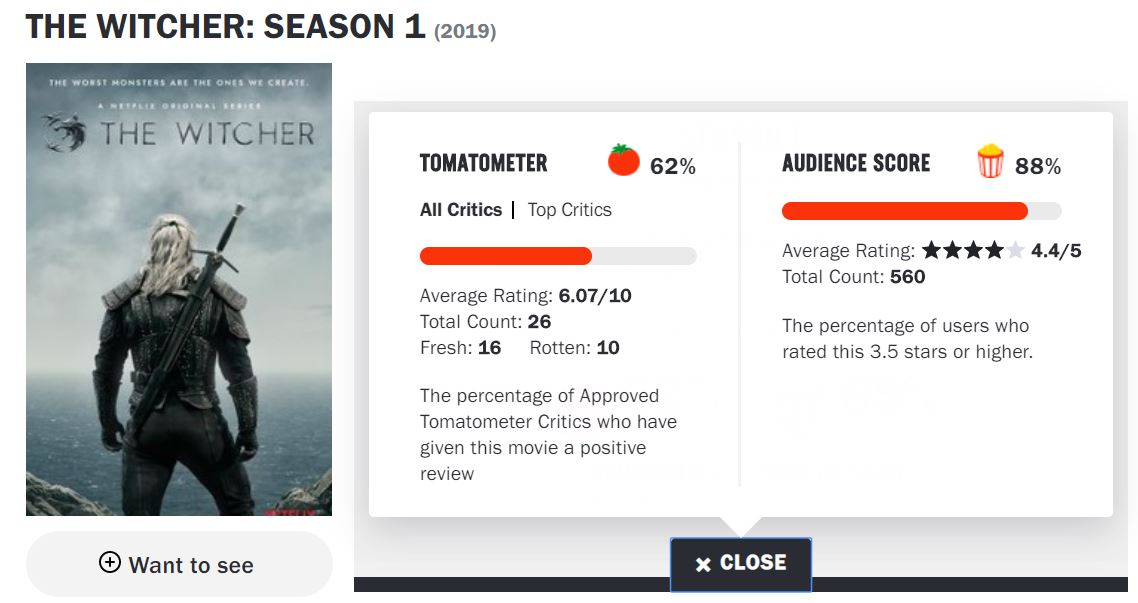 Dan Fienberg at The Hollywood Reporter gives the show a Rotten review. He writes, “Will you like The Witcher if you’re a curious neophyte? Maybe, but you have to be patient with it, and if that’s not your job, the outsized amusements may not be worth the convoluted build-up.”

Mike Hale at the New York Times gives the show a positive review. He writes, “If it sounds like that could be fun, you’re right. “The Witcher” has a lighthearted sense of humor.”

Ed Power at the Daily Telegraph gives the show a 3 out of 5 with a Rotten rating. He writes, “The Witcher, by contrast, is more muddled than Machiavellian – and also, perhaps, the mother of all missed opportunities.”

Kimberly Ricci at Uproxx gives the show a fresh score. She writes, “This series might finally make people stop referring to [Henry] Cavill as Superman or ex-Superman and, instead, as a theater-trained actor who made a nerd-fueled passion project — which, yes, really has no business being this enjoyable.”

Jacob Oller at Paste Magazine gives the show an 8.3 out of 10. He writes, “The Witcher is a wildly entertaining treat for newcomers and long-time fans alike.”

Alex Abad-Santos at Vox gives the show a 1.5 out 5. He writes, “I suppose we, dead baby included, can’t be as lucky as Henry Cavill’s leather, only experiencing The Witcher in tiny doses and getting to do so while being worn to death by the mortal hug of Cavill’s thighs.”

Erik Kain at Forbes gives the show a 9 out of 10. He writes, “If you’re looking for an original dark fantasy with some horror elements, some bare skin and plenty of blood and gore (and monsters) look no further. The Witcher, I am quite sure, is destined to surprise and delight.”

Here’s what viewers are saying.

Joshua S gives the 5 stars. He writes, “Perfectly faithful to the canon, and fantastically casted, directed and acted. From a lifelong Witcher fan, this is wonderful.”

Sandra G gives the show 5 stars. She writes, ‘This is what I wanted.”

Adam K gives the show a half star. He writes, “Strange, I don’t like it.”

Mike K gives the show five stars. He writes, “As a fan of the books, it’s about as good as you could hope for in a streaming series adaptation. Ignore the critics that wanted Game of Thrones 2.0, this isn’t that.”

Krzysztof S gives the show one and a half stars. He writes, “They have cut too much and changed too many characters so most of the fontal story losses most of the meaning. I don’t like political correctness. Maybe if I hadn’t read the books, I would have given a better mark.”

Iris L gives the show 5 stars. She writes, “Completely blown away. Cavill is fantastic as Geralt. Definitely a must watch!”

Phoe N gives the show 1 star. They write, “I like Henry Cavill and appreciate his enthusiasm for this role. Personally, I am turned off by killing an animal in a film if it doesn’t have any significance or symbolism. Like when a cat got eaten by a sea creature in an Oscar winner a few years ago. It’s in poor taste and unneeded. Apart from that, The Witcher was hyped up so much I expected it to be much better. It was like a Syfy Channel B-series. I cannot see how anyone could compare it to Game of Thrones. If you’re a Cavill fanatic or know the books, you might like it. But from the perspective of someone who is unfamiliar, it didn’t do it for me. I had no idea about GOT and got hooked on it after the first episode. I got hooked on LOTR. Not The Witcher.”

Over on Metacritic, The Witcher has a Metascore of 55 from 14 reviews.

William Hughes at The A.V. Club gives the show an 83. He writes, “When the worst thing you can say about a series is that every episode ends up being better than the one that preceded it, that leaves an exciting amount of room to grow. Especially when you can see it steadily moving out of the shadow of the show Netflix might have wanted, in favor of the far more interesting series it might actually turn out to be.”

Tom Reimann at Collider gives the show an 80. He writes, “For all its massive scale, The Witcher is a surprisingly small story centered around three appealing main characters. It’s a classic fantasy tale about war and magic and prophecy, with grotesque monsters, supernatural detective work, and political intrigue thrown into the mix. It’s all a bit silly, but no more so than Game of Thrones ever was.”

Tim Surette at TV Guide gives the show an 80. They write, “The barrier for entry with The Witcher is pretty high; between the weird-ass fantasy names, odd story structure, and complicated backstory, it’s a lot to take on without a little help. I went in knowing very little, but at some point decided “f— it, I’m in,” and left wanting to know a lot more. If you can add a new project like The Witcher to your life, you should.”

Daniel D’Addario at Variety gives the show a 60. He writes, “The Witcher also boasts richly expensive visuals and an expansive-seeming world, at least in its first five hours…What it lacks, though, is tonal consistency. This is a show with moments of drama and of gruesome violence cut through with a glancing humor that too often feels tossed-off and out-of-place in the world the show has created.”

Brian Lowry at CNN gives the show a 45. He writes, “Henry Cavill plays the title role in The Witcher, but giving a pulse to this dreary medieval fantasy series is too much of a job even for Superman.”

Darren Franich and Kristen Baldwin at Entertainment Weekly gave the show a 0. They wrote, “Alas, my destiny is to never watch this borefest ever again.”

The User Score on Metacritic currently sits at 6.3 from 321 ratings.

DizzyStyle gives the show a 4. They write, “Actually this isn’t bad but… It’s Witcher. This should be EPIC. Instead they create something usual.
– Not canonical
– Misscasting (triss, yen and other girl roles – no comments)
– Poor backgrounds (scenes/actions/graphics)
– Too mush tolerance for brutal east European fantasy
This film try to please everyone but instead this film just please too much tolerant and casual people.
Witch is brutal, no comprise and dark fantasy. But this is just a netflix teleshow.”

LeonCorvin gives the show a 1. They write, “This is what happens when you push a modern, tolerant agenda into a series on Slavic fantasy and ignore the canon of original books.”

MightyMike gives the show a 1. They write, “Bad acting backed up by even worst writing. Convoluted plot of the first episode made from various bits and pieces of at least two short stories was just a preview of how much Netflix writers can turn masterpiece into a piece of crap.

This, plus terrible dialogs, utterly craptastic casting choices and just low overall quality of the show force me to pick the lesser evil (which is give this show a 1 and warn all of you!)”

Smalo gives the show a 3. They write, “Hennry is good as Gerals everything else is not good. The Witcher should be on slavic culture not on western and there this show lost it s soul.
I would get 0 score but i will get 3 just because of Hennry.”

KUTC gives the show a 10. They write, “Awesome season and great start for a long-distance series. Hope people will get that it is an adaptation and a fantasy world. As Sapkowski himself said, when he curated the series along the way, that it never was a clear slavic novels, it is about the story, not about the world or individuals. I hope that this mess that infantiles are causing will end soon and they will see the series for themselves, for a change. Can bet 90% of them never read the books nor played Witcher besides the third one. Long live Withcer. Hope this saga will see it’s end on a screen and all of the stories will be told.”

Starilent gives the show a 5. They write, “he story telling is a mass, and some characters are disaster. I don’t mind some adaptation differ from the original books, but this adaptation is so bad… It lost a lot of good or key parts of books, but used the time to make Yennfer a childish **** ( while I LOVE this character in books and games).
And I really doubt that peoples who never read the original books could understand what happened in this show, cause they never explain any necessary information like what witcher is, why they drink that potions, why people hates them, what is the conjunction of sphere, witchers and mages age really slow and could live hundreds of years…
It’s a bad thing that you have to read the book or played the game first to enjoy the show.”

VonSeux gives the show a 4. They write, “Don’t you feel disconnected from the show when everything, even light, is post processed, and so… Fake? I do not care about book or game fidelity but this is just not good drama.”

MrMonsters gives the show a 6. They write, “Unfortunately, great production design and amazing fight scenes cannot make up for the show’s flat performances and dull dialogue.”

Have you see The Witcher yet? What did you think about it? If not do you plan on checking it out?