A prominent fan translator of Japanese video games has announced that he will no longer contribute his time to future translations after receiving a wave of harassment from Western social media users for an accurate translation of a joke referring to transgender individuals.

Ganbare Goemon 3: Shishi Juurokubee no Karakuri Manjigatame was originally released in 1994 for the SNES, and like most of the Ganbare Goemon series, the game never saw a release outside of Japan.

On January 25th, the game was made accessible to a more global audience thanks to the release of an English language ROM hack courtesy of programmer DDSTranslations. The hack replaced the Japanese script with an English translation provided by veteran translator ‘Tom,’ also known by his Twitter handle @RetroTranslator, who has provided fan translations for over 50 Japan-exclusive games, including Digital Devil Story: Megami Tensei, Ihatovo Monogatari, and Last Bible III.

Soon after the release of the ROM hack, some social media users took note of one particular line of dialogue, encountered when the player talks to an NPC named Kemeko who asks the player how she should reveal to her boyfriend that she is a “tranny.” 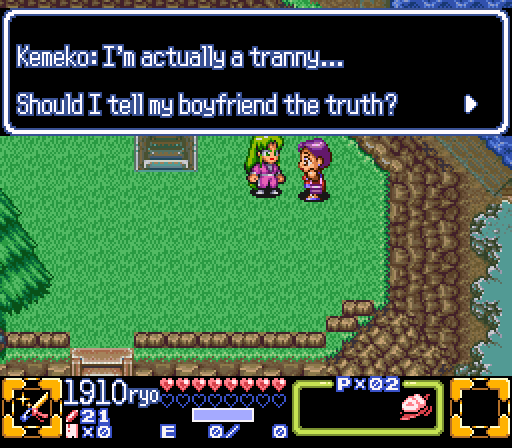 This is the only line of dialogue spoken by the character, and thus far the only instance of the word discovered in the translation.

The use of the word ‘tranny,’ widely considered to be a slur against transgender individuals, was brought to widespread attention by Hardcore Gaming 101 writer Kurt Katala, who accused the translation of “transphobia.”

(TW: transphobia) is it too much to ask for right wing fan translators to NOT stick slurs into their work? pic.twitter.com/BYQDFe0FLs

Katala’s tweet quickly sparked a wave of outrage against Tom, with some incorrectly crediting DDSTranslations for Tom’s work, including accusations of bigotry, calls to “remove discriminatory language” from translations, and odd associations with the accurate translation to “right wing” politics:

LRT: Aaaaand there goes my interest in playing the two Goemon fan translations that got released a couple days ago or so. Because why would you do that other than being offensive on purpose, and because who knows what other dumb shit might be in the script.

I remember when stupid edgy romhacks was the worst we could get. Now we have full blown transphobic right wing Trump cultist shitlords handling high profile translations.@DDStranslation should be ashamed of himself. https://t.co/3LsRKKVTab 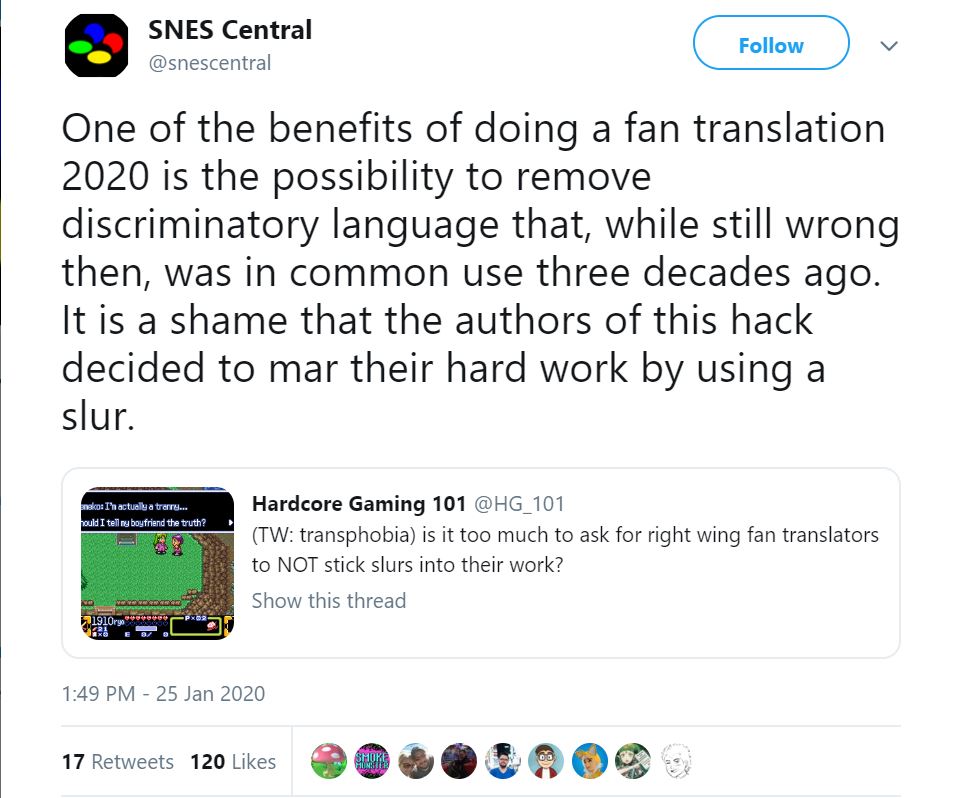 In the original Japanese text of the game, Kemeko refers to herself as a “newhalf,” which is a Japanese slang term for a transgender person which suggests “that trans women are a new kind of “half” (namely half-male and half-female).” 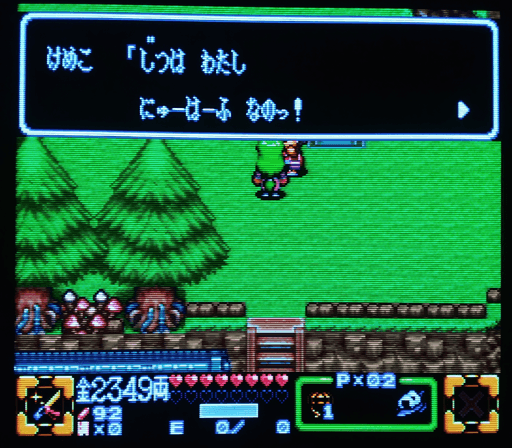 The accuracy of the translation was even confirmed against a physical Japanese copy of the game by Katala, though he did not apologize for his initial reaction and stated that it was “still a shitty word to translate as is.”

I booted up my Japanese copy to check and it used “newhalf” but it’s still a shitty word to translate it as pic.twitter.com/CTsI3mvWpH

However, the damage had been done, and Tom had received a bombardment of harassment related to the translation. Ultimately, Tom deleted all his posts from his personal Twitter account, leaving behind a single post defending himself against the various accusations and informing fans that he would no longer be contributing to fan translations, as “this whole thing has crushed my passion for translating.”

“My apologies to everyone. I needed some time to mull over this mess.

I want to clarify that whatever scripts I’ve translated don’t reflect who I am, or what I believe. People are calling me a far-right extremist now. Me? These people know nothing about me.

And the word that set off this whole mess? I didn’t even know anybody considered it completely off limits. I thought it was just a silly abbreviation, a slightly taboo word, something only a bit edgy, but well within the realm of a reasonable translation of the original Japanese line.

Yes, the original Japanese line in the game is insensitive, but please don’t think that having translated it in an insensitive way means that I’m somehow a hateful person, because I’m not. It crushed me to see the fallout of this. Anybody who has followed me for any amount of time knows that I wear my heart on my sleeve. I love all people, and every single living thing on this planet.

And I care about the games, too. I started working on fan translations because I care… I just wanted to share these experiences with people.

Seeing how all of this has turned out… It’s really crushed me. If one single word that I didn’t even know was so inexcusable caused this sort of uproar, what other words are off limits without my knowing? To be honest, the very thought terrifies me.

This whole thing has crushed my passion for translating, video games, and even simply writing in general. I can’t continue with it.”

According to another Twitter user, Katala did not consider this response to be satisfactory, as he later took to the infamous ResetERA forum to criticize Tom for an “awful non-apology”:

Also here, on resetera Kurt from hg101 himself admitting to harass Tom to change the line: pic.twitter.com/iTbCiZfzeN