A new rumor details that Seth MacFarlane and his new team at NBC walked out of a Star Trek sales meeting.

The rumor, which was posted on 4Chan, details that MacFarlane and his team at NBC had a meeting with CBS to discuss the sale of Star Trek to NBCUniversal. The meeting was scheduled for two hours, but ended up being done in half an hour when MacFarlane and company walked out of the meeting.

MacFarlane and his team reportedly walked out due to CBS’ price being “far, far in excess of what Seth was expecting.” The poster claims CBS’ price was so high because they are “emboldened by positive reception of Picard.”

However, they do note that MacFarlane and NBC did offer their own price and claimed it was “fair.” The offer allegedly included “all rights to movies and TV, except those held by Bad Robot.”

CBS did not outright reject the offer according to the poster.

Never had much faith in this rumour anyway but it looks like NBC wont be buying Star Trek. pic.twitter.com/UW6i4PFPXA

A previous rumor, also shared to 4Chan and then shared to Twitter by Angry Mr Flibble detailed that MacFarlane was interested in acquiring the rights to Star Trek.

It’s probably all nonsense but the idea of NBCUniversal and Seth MacFarlane acquiring Star Trek would surely be an improvement over what we’ve got now. pic.twitter.com/upDzKSXnie

That rumor indicated that CBS’ Star Trek: Picard was receiving negative feedback during test screenings. The poster, who claims they work for CBS, wrote, “First 5 episodes of Picard were test screened and received an average grade of C from general audiences, and D from Trek fans. For reference, even our shittest programs will usually get a B from general audiences.”

Although they did note, “Everyone is actually surprised how good some of the influencer comments on social media have been for the premier, but we’re putting it down to the open bar that was in the lobby. It’s not just Picard though, the higher-ups are shitting themselves about [Star Trek] as a whole.”

The show currently has a 94% Tomatometer rating from critics on Rotten Tomatoes. Critics gave the show an average rating of 8.06 out of 10. It has an 80% Audience Score with the average rating being 4.1 out of 5.

The score has an average weighted score of 8.8 out on IMDB. 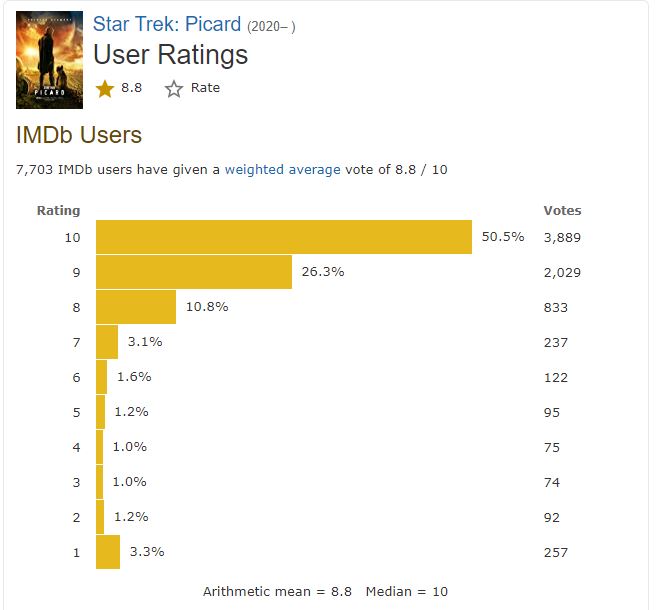 However, those numbers seem to be massively inflated as the scores are significantly lower for both critics and users on Metacritic. The critics’ Metascore sits at 77 while the User score is at 6.0 with 13 positive reviews, 6 mixed reviews, and 8 negative reviews.

Not only are the Metacritic scores significantly lower, but a source tells me that Star Trek: Picard’s Episode 1 viewership was worse than the CW’s Batwoman, which has seen viewership dip below 1 million viewers during its premiere season.