Aquaman star Jason Momoa was criticized after he shared a photo of himself with fellow Game of Thrones alum Peter Dinklage and Braveheart actor Mel Gibson on Instagram.

Jason Momoa shared a fan boy moment with fellow Game of Thrones alum Peter Dinklage as he met up with actor and director Mel Gibson. Momoa shared a couple of photos with him, Dinklage, and Gibson to his Instagram.

It was a fun moment for Momoa, and he made that clear as he wrote, “ICON. legend Mel you made my childhood amazing MAD MAX MARTIN RIGGS WILLIAM WALLACE in my opinion even a greater director. thank you sir for APOCALYPTO.”

Momoa added, “And yes anything you need from me IM F****** IN MEL. good to see u as always peter you always light me up love u bro.”

The post received over 1.6 million likes, but quite a few people were not happy that Momoa was taking photos with Mel Gibson.

Here are a few of the comments blasting Jason Momoa for taking the photo with Mel Gibson:

M.d.6276 wrote, “Let’s also not forget the antisemitism that he is famous for expressing. Love you, but this is truly not a good look!!.”

Jzstarlight wrote, “This makes me ill. Why?”

Related: Calls for Vince Vaughn To Be “Cancelled” Begin After He Meets With President Donald Trump at College National Championship Game

Matheus_cbs wrote, “Seriously, putting a sexist, anti semitic and racist on a pedestal?”

Delayrelay wrote, “I’m not sure your wife would feel the same about “how great Mel Gibson is.” And Rightmeow wrote, “So it’s okay to be cool w MG now? Ok.” 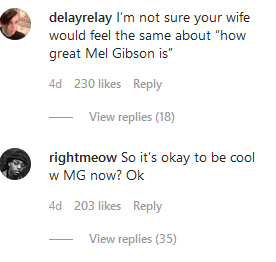 Buffalo55tx wrote, “Glad to see anti-Semitism is alive and well.”

As many know, Mel Gibson is a star and major player in his own right starring in Mad Max, Braveheart, The Patriot, and Lethal Weapon. He directed Braveheart, The Passion of the Christ, Apocalypto, and Hacksaw Ridge. While he had his success as both an actor and a director, he also had some personal demons made public.

Back in 2006 the actor was arrested for drunk driving. During the arrest he used some choice words with law enforcement including anti-Semitic and racial comments.

But that wasn’t the end of Gibson’s woes. After his divorce from his longtime wife, Gibson engaged in a volatile relationship with Oksana Grigorieva. She’d later accuse the star of both verbal and physical abuse to which the actor plead no contest to one count of misdemeanor spousal battery. Gibson would then complete a sentence of three years probation, one year of counseling for domestic violence, and two days of community service. After completing his sentence his conviction was vacated.