On April 18th, YouTuber Vara Dark posted a video recounting how she received a threatening email, and then was subsequently hacked after covering fellow YouTuber Suzy Lu.

Dated April 16th, the email came on the heels of an investigation the YouTuber was doing into Suzy Lu.

For those that are unfamiliar with Suzy Lu, she is a reaction YouTuber with over 360k subscribers.

Over the last couple of years, Lu has been embroiled in controversy over allegedly flagging a variety of YouTube channels who have posted videos that are critical of her or are looking into her activities.

Suzy Lu often gets called into question for her own content, which consists of reacting to full length episodes of anime such as My Hero Academia and Naruto. She’s also been accused of engaging in copyright infringement.

When YouTubers question how she gets away with this, they often get their channels struck. Suzy Lu has targeted Mark After Dark, TipsterNews, John Swan, and even the Quartering to name a few.

He claims that Suzy Lu abuses the YouTube copyright system and “systematically flag[s] down people criticizing them.”

Now back to Vara Dark. She had just finished a series of videos on Lu, entitled “Suzy Lu Deplatforms and Censors Critics – What I think of her” and “Suzy Lu’s Strike Censorship Continues – My Last Word on Suzy Lu.” 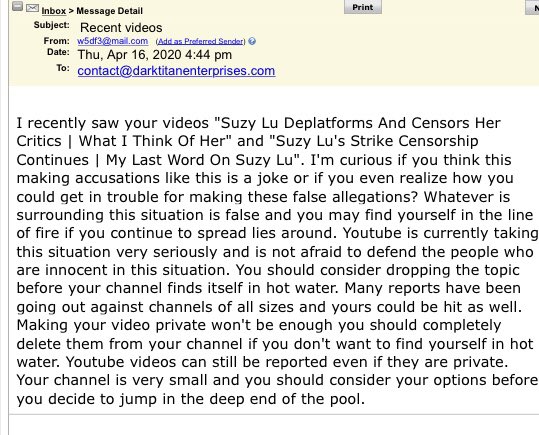 The email states that Dark is “spreading lies” and that she should drop the topic or risk being in “hot water.”

It continues, “Many reports have been going out against channels of all sizes and yours could be hit as well.”

Finally, it urges that she delete the videos entirely because unlisting them is not enough.

It closes by saying her channel is small, and that she should consider her options before jumping into “the deep end of the pool.”

If the email wasn’t enough, hours later, Dark claims someone someone hacked into her web hosting account and used the card on file to rack up nearly a thousand dollars in domain purchases.

Luckily, Vara’s bank flagged the charges as fraudulent activity and will be working with her to get her money back.

This very well could be an isolated incident. However, Dark points out in her video that she was blocked on Twitter by Suzy Lu hours before receiving the email.

I have put up 2 videos on Suzy Lu. I wasn’t disrespectful, all I did was discuss the situation at hand. Today I was not only blocked by Suzy Lu but I also received a rather threatening (anonymous) email… Nothing to see here… pic.twitter.com/DPMqtiCWxO

Dark explains in the video above, “I want to make it clear here that I’m not accusing Suzy Lu of doing any of these things. Obviously it could be one of her very obsessive supporters or just someone in general who dislikes me. But the timing of everything here seems suspicious.”

What do you think? Is Suzy Lu involved in the threats and breach of Vara Dark?